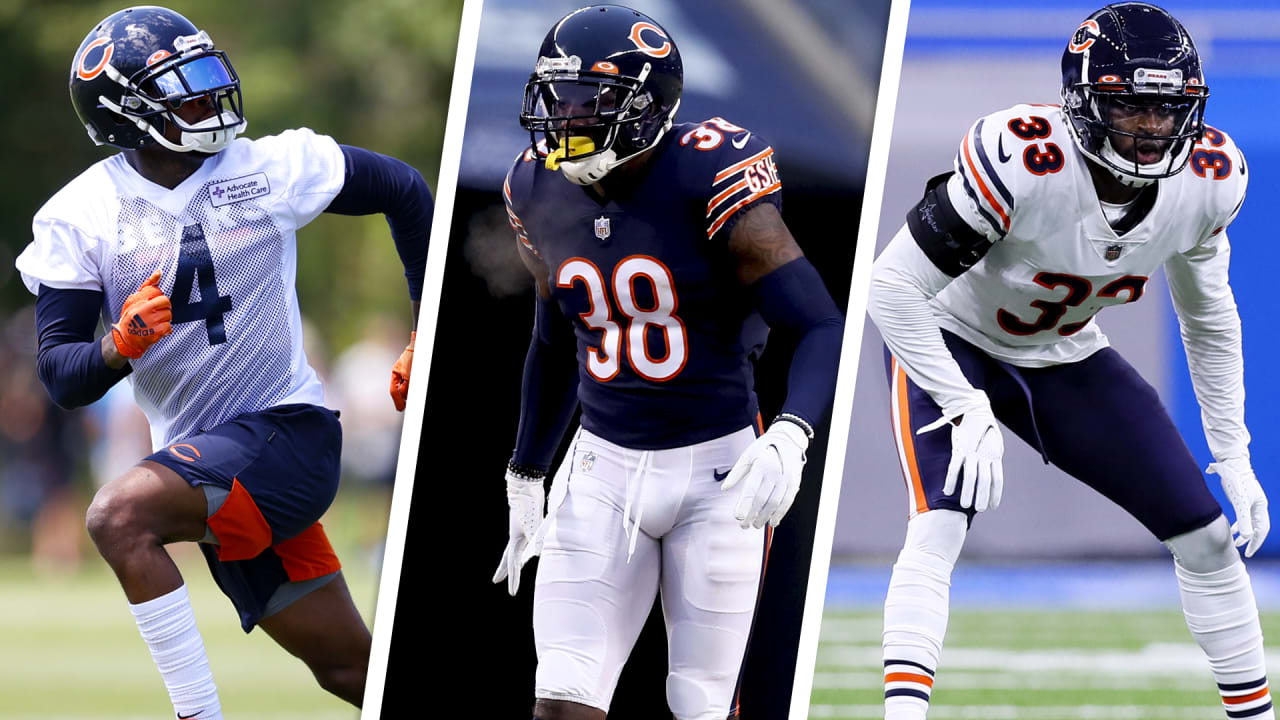 Jackson has started 62 of a possible 64 games in four seasons, registering 266 tackles, 10 interceptions, 31 pass breakups, seven forced fumbles and six fumble recoveries. Last year he ranked third on the Bears with a career-high 82 tackles. He failed to record an interception for the first time as a pro but had two pick-sixes nullified by penalties.

Jackson should benefit from the return of Gipson, who started all 16 games last year in his first season with the Bears, tying for fourth on the defense with 66 tackles, tying for the team lead with two interceptions and producing five pass breakups.

“It’s huge,” Jackson said. “I haven’t played with a safety two years in a row since Adrian Amos [in 2017-18]. So, to come back and have that chemistry, man, it’s huge, especially back there.”

First-year defensive coordinator Sean Desai, who served as Bears safeties coach the past two seasons, is excited about Jackson and Gipson continuing to play together.

“What it’s going to allow is those two guys’ relationship is going to grow,” Desai said. “Just go through the history of football or any sport. If you want to be good—like those Bulls teams were good in the ’90s—they had the same players playing over and over and they were communicating with each other, and that helps.

“When [Gipson and Jackson] are back there and they’re communicating and handling all of the coverage assignments, that helps because now they know how each other plays. They know what each other’s preferences are and how to take care of different issues on the back end, and I think that’s the biggest growth that we’ll see there.”

The Bears boast quality depth at safety in veteran reserves ﻿Deon Bush﻿ and ﻿DeAndre Houston-Carson﻿, both of whom have contributed primarily on special teams but also excelled when called upon to fill in on defense.

Last season Bush generated his first career interception in a win over the Giants, while Houston-Carson preserved back-to-back victories with late impact plays, breaking up a Tom Brady fourth-down pass against the Buccaneers and intercepting a Teddy Bridgewater throw versus the Panthers.

Veterans ﻿Jordan Lucas﻿ and ﻿Marqui Christian﻿ will also compete for playing time at safety this summer.

With the release of veteran Kyle Fuller for salary cap reasons, Johnson is expected to become the Bears’ top cornerback—and that’s just fine with the 2020 second-round pick from Utah.

“It’s something I’ve been working for my whole life,” Johnson said in June. “It’s not just after one year. Of course, that rookie year is the hardest. So just being able to learn from that and just trying to take all of my preparation throughout my years of playing football and being a leader throughout high school, throughout college.”

Johnson started the first 13 games of his rookie season last year before being sidelined by a shoulder injury. He compiled 44 tackles and tied for ninth in the NFL with 15 pass breakups. In his first pro game, Johnson preserved a Week 1 win in Detroit by batting away a pass in the end zone as time expired. Later in the season, he helped generate two interceptions by Fuller and Gipson with pass deflections.

Johnson missed the final three regular season games and the wild card playoff contest against the Saints with a shoulder injury. But the Bears are excited about his return and continued development in 2021.

“He’s only going to get better,” said defensive backs coach Deshea Townsend. “He’s versatile. He’s not a small guy. He can match up with different types of receivers. He can go against a big receiver, smaller receivers. He’s a willing tackler. And then just his knowledge of the game, he’s a sharp kid. He understands what offenses are trying to do, and that’s impressive.”

On the same day they released Fuller in March, the Bears signed veteran cornerback ﻿Desmond Trufant﻿. The 6-foot, 190-pounder has started all 103 games he’s played in eight NFL seasons with the Falcons (2013-19) and Lions (2020). He has recorded 349 tackles, 14 interceptions, 83 pass breakups, 10 tackles-for-loss, six sacks, three forced fumbles and seven fumble recoveries, two of which he returned for touchdowns.

Trufant was selected by the Falcons with the 22nd pick in the first round of the 2013 draft out of Washington. He had an excellent rookie season, amassing 70 tackles and 17 pass breakups, which remain career highs in both categories. The most interceptions he’s had in a season is four in 2019.

Second-year pro ﻿Kindle Vildor﻿, a 2020 fifth-round pick from Georgia Southern, also is expected to push for playing time at cornerback and nickel back. As a rookie last season, he appeared in all 16 games with one start, compiling 17 tackles and one pass breakup. All but one of the 135 snaps Vildor played on defense in 2020 came in the final four games after Johnson was sidelined.

“I think [Vildor] showed the ability that he can play in the NFL,” Townsend said. “Coming from Georgia Southern and getting thrown in later in the year after Jaylon was hurt, the way that he played and how well he played, it showed you that his ability is there. I think if the same expectation of Jaylon from Year 1 to Year 2 is high, you expect the same thing from [Vildor]. The thing that makes it great about that kid is how he works. He’s always texting asking about ball, so it means a lot to him.”