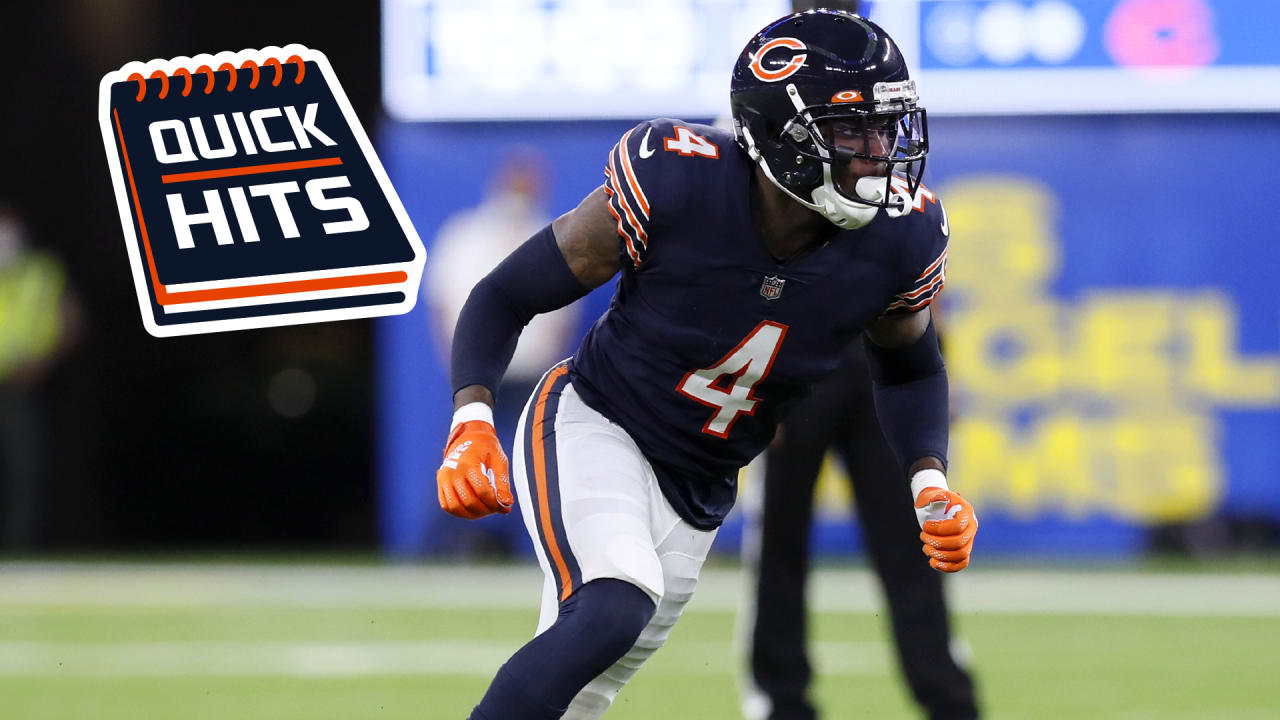 Building a bond: The rapport that continues to grow between rookie quarterback ﻿Justin Fields﻿ and receiver ﻿Darnell Mooney﻿ was evident in the Bears’ most recent game.

Trailing the Steelers 26-20 Nov. 8 in Pittsburgh, Fields scrambled to his left and rifled a 16-yard touchdown pass to Mooney in the corner of the end zone, giving the Bears a 27-26 lead with 1:46 remaining in their eventual 29-27 loss.

The TD connection in Pittsburgh came when Mooney sprinted to his left as soon as Fields escaped the pocket. Asked when he knew the receiver was open, Fields said: “Right when he broke and the defender had his back turned. It’s pretty much routes on air. The DB can’t see the ball. So, I just put the ball in a good place and [Mooney] came down with it.”

Mooney will enter Sunday’s home game against the Ravens leading the Bears in all receiving categories with 36 receptions for 450 yards and two touchdowns.

“I just like his work ethic,” Fields said. “He’s always willing to work, always wanting to meet late, meet after meetings and get on Zoom. Early in the year, I was telling [reporters] how we would just stay and throw after practice. So just the connection that we have and just the amount of work he puts in, how great he wants to be, it’s just inspiring really to me. When I Facetime [him] and he’s watching film, I’m like, ‘Dang, maybe I should be watching more film.’ He’s a great player and a great teammate.”

Helpful hints: Fields will oppose Lamar Jackson for the first time Sunday, but it won’t be the first time the Bears quarterback sees the Ravens star in action.

Last season at Ohio State, Fields picked up some valuable tips from watching tape of Jackson, one of the most elite dual-threat quarterbacks in NFL history.

“Last year when I was in college, I would turn on his highlights and study how he ran the read option, how his feet were and how he kind of got a running start,” Fields said. “When he runs the read option, he staggers his feet so he can be already in a running position to run the ball after he’s reading the defensive ends. So, last year I kind of just watched how he operated that.”

Jackson is an inspiration to dual-threat, non-traditional pocket passers. But it certainly isn’t easy for Fields or anyone else to emulate the Ravens star.

“To be honest with you, there’s not many guys who are like Lamar Jackson,” Fields said. “He does stuff that some receivers, running backs can’t even do. So, I don’t think you can compare it to that, but just all of the backlash he got coming out of college saying he was a running back and stuff like that, he’s just proving everybody wrong. He’s one of the best [quarterbacks] in the league right now.”