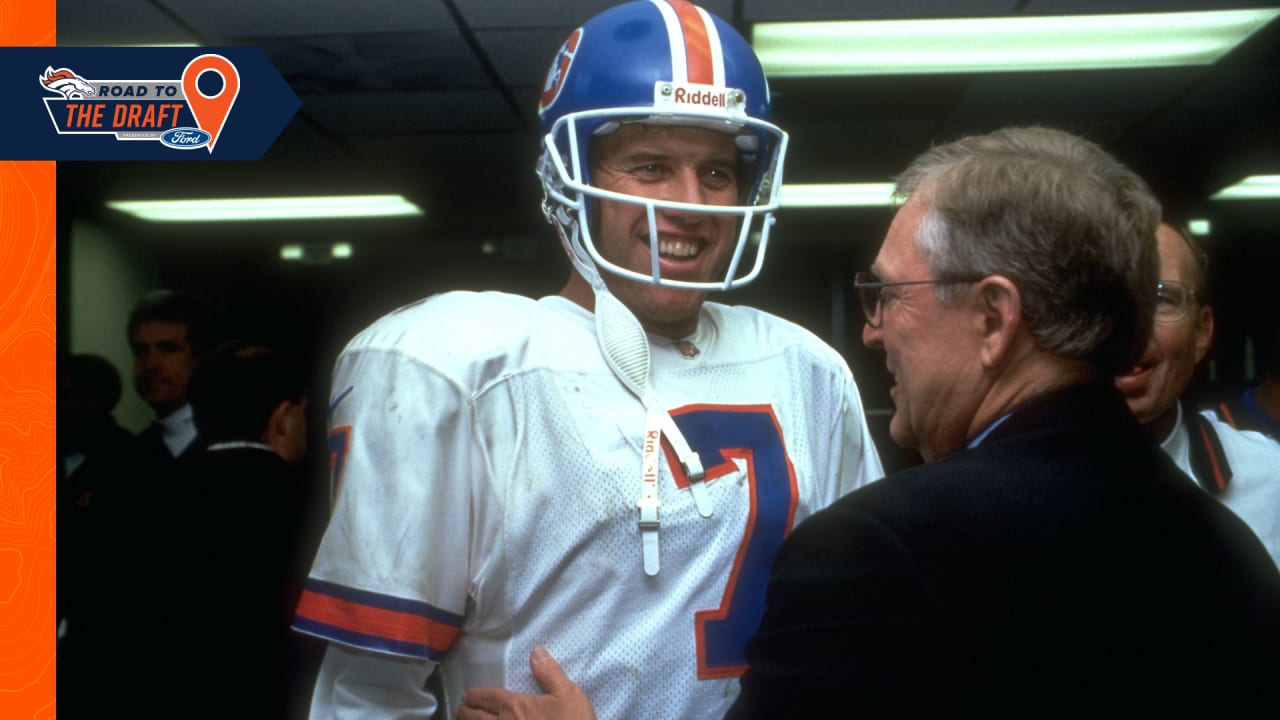 Draftmania is once again upon the National Football League and its 32 member clubs.

And with that, there is the question of whether the Denver Broncos will hold on to the No. 9 pick, trade up or trade down.

And with that, will they acquire a quarterback as part of the process?

The unquestioned best draft trade ever executed by the Broncos came in 1983, one week after the draft had ended, when the Broncos traded their first-round selection (offensive lineman Chris Hinton), their 1984 first-round pick and reserve quarterback Mark Herrmann to the Baltimore Colts for quarterback John Elway.

Longtime Broncos general manager John Beake, then the head personnel man for the team, remembers the trade for Elway and the 1983 draft.

“Going in, [veteran quarterback] Craig Morton had retired, so it was felt that the Broncos could use a quarterback,” Beake says. “But Elway was going to be the first player taken, so with the fourth pick we took Chris Hinton of Northwestern. A very good player.”

Hinton, in fact, became a seven-time Pro Bowler and earned All-Pro honors from various media outlets for five of his seasons. He is now in the Colts’ Ring of Honor.

But the Broncos were in need of a quarterback.

“During that draft, we actually did take a quarterback — Gary Kubiak — and no one dreamed he would become such a major part of Broncos history,” Beake says.

“Anyway, during the draft we actually were already working on getting Elway. Our tight ends coach, Fran Polsfoot, had played with Jack Elway [John’s father] at Washington State, and we had Fran call Jack to congratulate him, but also to let him know what a great place Denver was and that [owner] Edgar Kaiser and [head coach] Dan Reeves were great guys building what we hoped was a championship team.

“I’ll never forget that after his initial call to [Colts owner] Bob Irsay, Edgar sauntered politely into the draft room to let us know that we are working on a trade for John Elway. Then he politely left, and the coaches and personnel people sort of chuckled under their breath at what they assumed to be naïveté by our owner.

“But no one knew that Edgar knew Bob pretty well and that the two had a mutual respect for each other.

“Over the next week, most the teams in the NFL were making a pitch for Elway.”

But those other teams were all calling either Baltimore coach Frank Kush or general manager Ernie Accorsi, a highly respected football man who in fact grew up with Beake in New Jersey. No one in the NFL knew that being the Baltimore coach or GM were not factors, as Irsay had privately decided that he, and he alone, would make the Elway trade.

And he had great respect for “that nice Kaiser boy,” as he referred to the Denver owner.

“We all saw a different side of Edgar Kaiser,” Beake recalls. “He was a mover and shaker, a real power broker, at a level with which we were unfamiliar.”

“On the days leading up the trade, I was in the loop and just waiting,” Beake says. “Our defensive line coach, Stan Jones, had been dispatched to get Hinton a beautiful pair of cowboy boots, and we gave them to him at a team dinner when we brought all the rookies in.”

But meanwhile, we were working on Elway.

This author well recalls that team dinner, and that eventually everyone departed except two guys, myself and general manager Hein Poulus. It was there, at the Colorado Mining Company restaurant, that Hein outlined for me what would be the specific financial terms of the Elway contract.

I was sitting in my office on May 2, on a phone call with a local reporter, when Hein walked in. I cupped my hand over the phone, and he calmly said, “The Elway deal is done. Finish your call and come see me.”

In his office a few minutes later, Hein said that he, Beake, Kaiser, Elway and Elway’s agent Marvin Demoff would meet right at the tarmac of a private airfield that night.

The deal with Baltimore was done, pending Elway’s agreement on a contract.

“How long will it take you to do a press release?” Hein asked.

“It’s done,” I replied. “When Mr. Kaiser told me a week ago that he was working on this [he had said, “We are halfway done and we have halfway to go”] I saved the bio of John sent out by the league, and added to make a release out of it. It is in my desk drawer.”

Later that night, Beake met with key Bronco figures to hammer out the details at a coffee shop on Colorado Boulevard.

“If the other people in that shop knew what we were doing. . . ” Beake recalls.

“There was so much going on, phone calls back and forth between two owners, just about every other team calling Ernie or Frank, I don’t think it could happen just that way again,” Beake said.

“In the end,” he adds, “I was a support person. Edgar and Hein got on that plane with Marvin and John, and they would either all come off or there was no deal.

“If you could see that contract, with all the strikeouts and additions and changes in wording, it was really something.

“A lot of pieces of the puzzle were put together on that plane.”

Eventually they all got off the plane, and Hein called me in my office at 8:30 p.m. and asked how soon we could have a press conference.

I said that I wanted the writers from Colorado Springs to at least have a chance to get there, so I said 10:30 that night would be best.

It was the latest, most significant press conference ever called by the Broncos.

The next day, I spoke with Denver Nuggets public relations director Harv Kirkpatrick. The news of the press conference had come in the middle of a Nuggets playoff game.

“When the guys got calls from their desk people that the Broncos were having a 10:30 press conference, it was like there was a bomb threat on press row,” Kirkpatrick said. “Just about everyone got up and left.”

All the parties arrived on time, we had a 10:30 press conference and John Elway was a Bronco.

A Bronco forever, as it turned out.

Beake had the task of calling his old friend Ernie Accorsi and breaking the news to him.

“Ernie slammed the phone down on me,” Beake recalls, adding that “we have been great friends forever, but boy was he mad that night.

“Here you have the draft, but there is always a lot of intrigue that goes on in and around the draft.”

A year later, Beake removed the only real competition to Elway as the Broncos’ starter when he traded Steve DeBerg to the Tampa Bay Buccaneers. I remember that DeBerg was so happy to leave Denver and go to a team that did not have a future Hall of Famer at quarterback. There was a bottle of champagne left over from New Year’s Eve in our little Broncos kitchen, and Beake, myself, DeBerg and his agent had a toast of happiness to the trade. I wonder if a traded player ever toasted his previous team’s GM with champagne before — or since — but he was so thrilled to move out from the Elway shadow.

But the Broncos’ success in that ’83 draft didn’t end with that top player. Well into the draft, the Broncos found another star.

“The draft was 12 rounds in those days, and we might be the only team ever to make a trade of number ones to get a Hall of Fame quarterback, and then draft a guy who should be in the Hall in the 12th round — Karl Mecklenburg,” Beake points out.

But that’s a story for another column, which I will write next week.

I remember when Beake was giving me a ride to my car after getting back from a road game during Elway’s rookie year and I mentioned Elway’s abilities and surmised how good he might become.

“Let me tell you something, Jim,” Beake replied. “If we do any kind of job building around this kid, we are all going to be wearing rings like rock stars.”

And that is how it all worked out, and those are the special memories of John Beake regarding the 1983 draft.