FOXBOROUGH, Mass. — The question of who calls the plays for the New England Patriots‘ offense lingers, but when it comes to who has taken ownership of the unit on the field, receiver Jakobi Meyers is emphatic.

“Has he taken control of the offense? That’s a capital YES, exclamation mark, exclamation mark,” Meyers said Thursday at the conclusion of the Patriots’ mandatory minicamp. “He’s the real deal. We’re all trying to catch up what’s in his mind, his vision.”

Asked if he feels ownership of the offense in his second season, Jones said: “Yeah, I think that’s the whole point of the quarterback, to lead the guys around you, get them the ball. 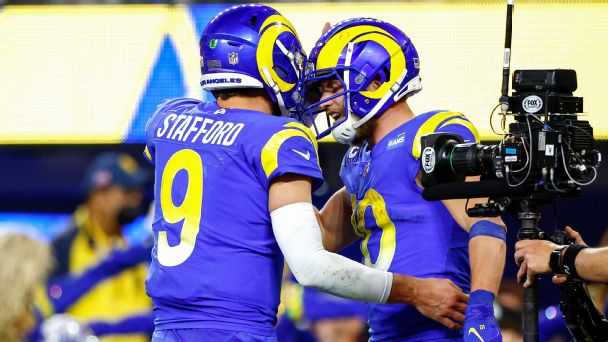 “I have the ball every play and I have to make decisions to help the team win. You have to stop from losing before you can win. That’s the goal — do that even better this year.”

Coach Bill Belichick seems to like the progress at this point, as evidenced by his canceling the final practice of mandatory minicamp Thursday and the final two voluntary organized team activities scheduled for next week.

That has been commonplace in recent years, with Belichick rewarding the team for its work, with the belief that a foundation has been established leading into training camp in late July.

Jones, in particular, has made some impressive throws in recent practices. On Wednesday, he had multiple tight-window deliveries down the field — to receivers Tre Nixon and Nelson Agholor, and tight end Jonnu Smith — that had members of the offense celebrating.

“He’s been really adamant about what he says. He has a clear vision in his mind … we just have to catch the ball he throws.”

Agholor, who had rookie cornerback Jack Jones draped all over him on a “go” route on his long hookup with Jones, added: “He does a great job of communicating, and is working to be the best version of himself.”

Jones’ ownership of the offense was also noted by running back Damien Harris, who was also his teammate at Alabama.

“He’s an incredibly hard worker, that’s what I appreciate about him the most,” Harris said. “Coming out here, seeing the way he leads, [he] works his butt off to be his best in order to help all of us as his teammates be our best.”

As for who will call the plays into Jones, it’s been notable to several players, including the quarterback himself, how involved Belichick has been with the offense. At one point Wednesday during a drill aimed at running backs and how they need to get through the line of scrimmage, Belichick actually snapped the ball to Jones as a center.

“He’s very hands-on. Last year, he was more with the defense. But now, it’s like, ‘OK, let me show you this’ and he’s kind of coaching us,” Jones said. “I feel like we’ve made a lot of growth together as an offensive unit with him.

“He’s seen the most amount of football of any of our coaches. He’s seen defense, offense and special teams, so having his input is always going to be very beneficial to me, because he knows what puts stress on the defense.”

All of this has taken place after Belichick said the offense has been “streamlined” this offseason, similar to what he did with the defense in 2019-20. In essence, the Patriots have simplified things, with Jones saying it’s aimed at playing faster.

Jones was asked to describe his comfort level with the coaching setup now that there have been a handful of practices to assess.

“The most important thing is getting on the same page, speaking the same lingo, between the players, the coaches, and we’ve done a good job of that,” he said.

“I definitely think we made pretty good strides there in the past couple weeks. You can’t be done with OTAs and let that fall off. You have to carry that through the season, that’s the most important part. We understand that for training camp. We have to keep communicating and keep talking.”

Miles Sanders’ comments on Eagles will give fans…