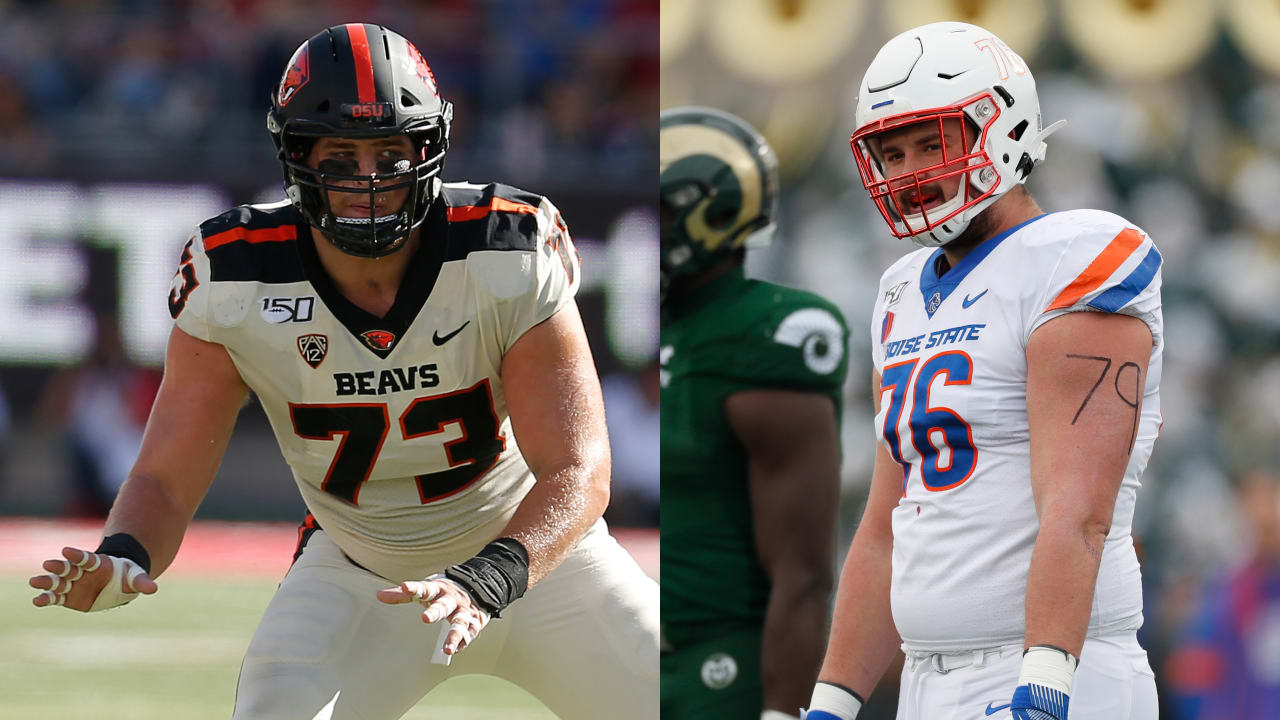 Here’s a deep dive on how each of the drafted offensive linemen could figure into Minnesota’s future plans:

There was some pre-draft chatter that Cleveland would go in the first round. But the Vikings were more than happy he fell to them near the end of the second.

Cleveland started all 13 games at left tackle for Boise State in 2019 and was named a First-Team All-Mountain West selection for the second consecutive year. He started all 40 games in three seasons with the Broncos.

Cleveland’s selection meant a Minnesota reunion was on the horizon, as he was teammates at Boise State in 2017-18 with running back Alexander Mattison. Cleveland helped Mattison rush for 2,501 yards and 29 scores in those two seasons.

“Alex was the first person I texted when I got the call from the Vikings, and me and him celebrated together because this has been a dream of ours since he left here,” Cleveland said. “I remember, I was one of his big reasons [why he was] teetering on either leaving or coming back. Being with him again is definitely a really cool experience.”

Where He Could Play: It remains to be seen if Cleveland will earn the starting left tackle job, which could push veteran Riley Reiff inside to guard. Vikings General Manager Rick Spielman also noted that Cleveland could also begin his career at guard before moving to the outside.

But no matter where the 6-foot-6, 311-pound lineman fits in, it’s clear he has the athleticism to succeed. Cleveland clocked in at 4.93 seconds in the 40-yard dash at the combine, which was the third-fastest among all offensive linemen in Indianapolis.

“You watch the tape, first of all, and you see with your own eyes what you think he can do in our type of offense,” said Vikings Director of College Scouting Jamaal Stephenson. “But definitely when you get to the combine and he blows it out like he did, it just kind of re-emphasizes what you saw on tape, and you feel good about it.”

Cleveland said he’s already familiar with Minnesota’s scheme that the Vikings will run under Vikings Offensive Coordinator Gary Kubiak, which could help his transition in a year when all teams’ offseason programs were canceled because of COVID-19.

“Oh, a hundred percent. At Boise, we’re a big zone offense, as well,” Cleveland said. “We do inside zone first, then power, then mid-zone. A bunch of our plays are the zone scheme that you’re talking [about]. … I think it’s a huge benefit for me to be coming from a zone-type scheme and going right back into one.”

Coachspeak: “He’s a really good athlete, and he’s very bright. That’s the type of guys we’ve had a lot of success with in our scheme. With Ezra, we’re going to work with him doing a lot of things – working at tackle, he’s going to move inside and work at guard. We’re going to play our best five guys, so he makes us very competitive the minute he walks in the building. But his brain, his football brain, gives us the ability to do a lot of things with him and then settle him down where we feel best. A three-year starter, done it with some very good offensive football teams. We’re going to ask you to run and get to the second level, do all those types of things, and naturally you’ve got to be able to pass-protect in our league. But Ezra will catch up very quickly. We’ve spent a few days with him, just kind of talking to him, and it’s very clear to us that this kid could be a quick study for us moving forward.”

“A lot to like about this young man … he reminds me a lot of Brian O’Neill,” Bercich said. “He’s tough … a former high school wrestler … and coaches love linemen who used to wrestle because they understand the importance of leverage.

“You see his great footwork, and he has the athletic ability to get up on the defensive back in space [at the next level],” Bercich added. “Overall, he has a lot of athleticism and size. He’s going to have to work a little bit, like Brian O’Neill did, to add strength. A very, very good pick. You can make a guy bigger and stronger, but you can’t make him faster.”

Tags: cleveland he was