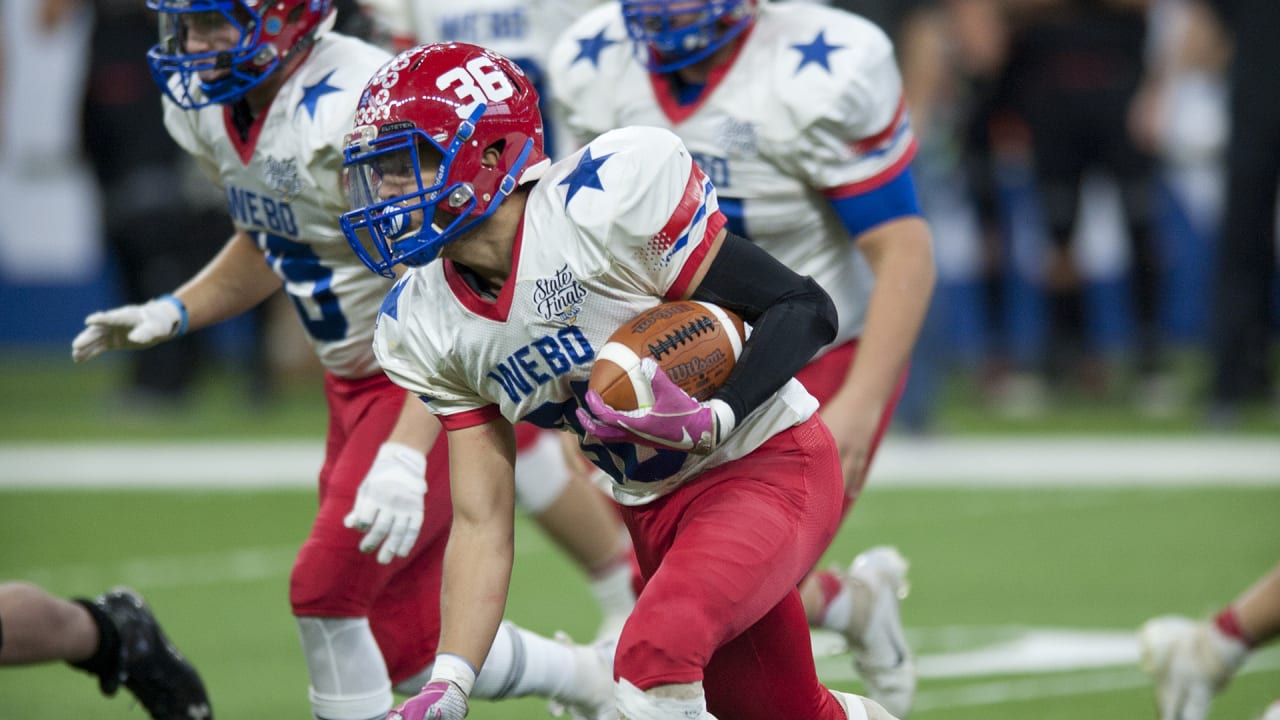 CHALK TALK:  “Offensively, it will be important for us to be efficient and stay on schedule with down and distance. We will have to make competitive plays in the passing game and still be able to move the ball on the ground. Defensively, we will have to keep the football in front of us and try to eliminate the explosive play. We have to force them to drive the football the length of the field and not chew up yardage on chunk plays. We must also play a clean game on special teams and use those units to control field position. We know we are going to have our hands full.” – Lafayette Central Catholic’s Brian Nay.

“The key for us this week is to continue to have great focus on us. Don’t become distracted with all of the pomp and circumstance and look to improve again this week in practice. I believe the keys will be our execution, our ability to play without mistakes, limit penalties, and to be fundamental football players.” – Indianapolis Lutheran’s Dave Pasch.

TOP PERFORMERS: Wyatt Stephenson scampered 268 times for 1,290 yards with 22 scores for the No. 8 Panthers. Brett Wethington has rambled 120 times for 788 yards with eight touchdowns for the No. 2 and defending state champion Stars.

CHALK TALK: “We will need to keep a lot of attention on their quarterback Spencer Wright. He’s an accurate thrower and outstanding runner. Team defense will be the key. Our offense can help by having some long, sustained drives to keep it out of his hands. We need to create a turnover or two and find some momentum plays.” – Eastbrook’s Jeff Adamson.

“Two very familiar opponents get together in a rematch of last year’s state championship game. I believe the rematch favors both defenses as we are both familiar with each team’s identity on offense and what they ‘want’ to do. This game will come down to players making plays.  I think it would be cheating the players on both sides of the field to think that one team will out scheme the other. In week 15, we are what we are and both teams will rely on what got them to this point in the season. Who makes the plays? Special teams and penalties always play big factors in big games such as this and we will have to play a clean game if we expect to win.” – Western Boone’s Justin Pelley.

CHALK TALK: “Heritage Hills’ defense is very good and they run many different looks, so we will really have to concentrate on making sure we are in the right calls. Offensively, they are very difficult to defend because they are so precise in their operation of their offense. Their offense is different than anything we normally see, so we will really have to play assignment football. As always, the most physical team usually wins, so that will be an emphasis for us this week.” – Bishop Chatard’s Rob Doyle.

“First of all, I would like to thank the Indianapolis Colts for hosting the Indiana High School Athletic Association State Football Championships. It’s an awesome venue and outstanding experience for our players, coaches and fans. To be successful in the state championship game, our players need to believe. We need to believe that our preparation and process have us prepared for this moment. Bishop Chatard is an outstanding football team. We will need to stick with our recipe of playing great defense, running the ball, and making big plays on special teams. We are thankful and feel blessed to have this opportunity.” – Heritage Hills’ Todd Wilkerson.

CHALK TALK: “We are very excited for the opportunity to play on the biggest stage in the state. We will be successful if we can control our emotions, establish a run game, and limit our mistakes. Evansville Memorial is a very good team, and we will have to play our best in order to win.” – East Noble’s Luke Amstutz.

“East Noble is a well-coached football team who is very explosive football team on both sides of the ball. Coach Amstutz and his staff do a great job preparing and making adjustments in big games. We will need to stop the run, protect the football, eliminate penalties, and make big plays on both sides of the ball.” – Evansville Memorial’s John Hurley.

TOP PERFORMERS: Hayden Vinyard racked up 101 rushes for 711 yards and seven touchdowns for the No. 2 Vikings. Maxen Hook has 22 receptions for 420 yards and seven scores for the top-ranked and defending state champion Dragons.

CHALK TALK: “We are going to need to control the line of scrimmage on both sides of the ball. Offensively, we have to maintain and capitalize on long drives. Defensively, we need to fill our gaps and also be sure tacklers.” – Valparaiso’s Bill Marshall.

“This is the biggest stage in Indiana high school football and with that needs to come our best performance of the season. Valparaiso and Coach Marshall have done an amazing job in his time there and they are incredibly well-coached. This is such a special week to be a part of, so we need to enjoy and embrace the experience while preparing for an exceptional opponent Friday night.” – New Palestine’s Kyle Ralph.

CHALK TALK: “Center Grove is a great program and perhaps our biggest rival. This game looks to be another in the long list of classic battles between Carmel and Center Grove. Coach Moore has his team hitting its stride and playing with great energy and confidence coming into the championship. It will be a major challenge to attempt to gain control of the line of scrimmage on both sides of the ball and take care of the football. I think the outcome of the game will be determined by just a handful of pivotal plays. We’ll have to weather the highs and lows of the game to make those plays happen in our favor.” – Carmel’s John Hebert.

“For the Trojans to have success, we must control the football and get first downs. It would be great if the offense could get one or two big plays on the offensive side as well. However, we can’t allow any big plays and need to limit the penalties. We will have to play a physical game on both lines of scrimmage. I have to hope we have enough gas in the tank to finish the playoff drive that has us competing against the MIC (Metropolitan Interscholastic Conference champions, Warren Central, Ben Davis, and finally Carmel.” – Center Grove’s Eric Moore.

What Colts Scouts Saw In Fifth Round NFL Draft…

Josh Myers learning all he can in quest to be…