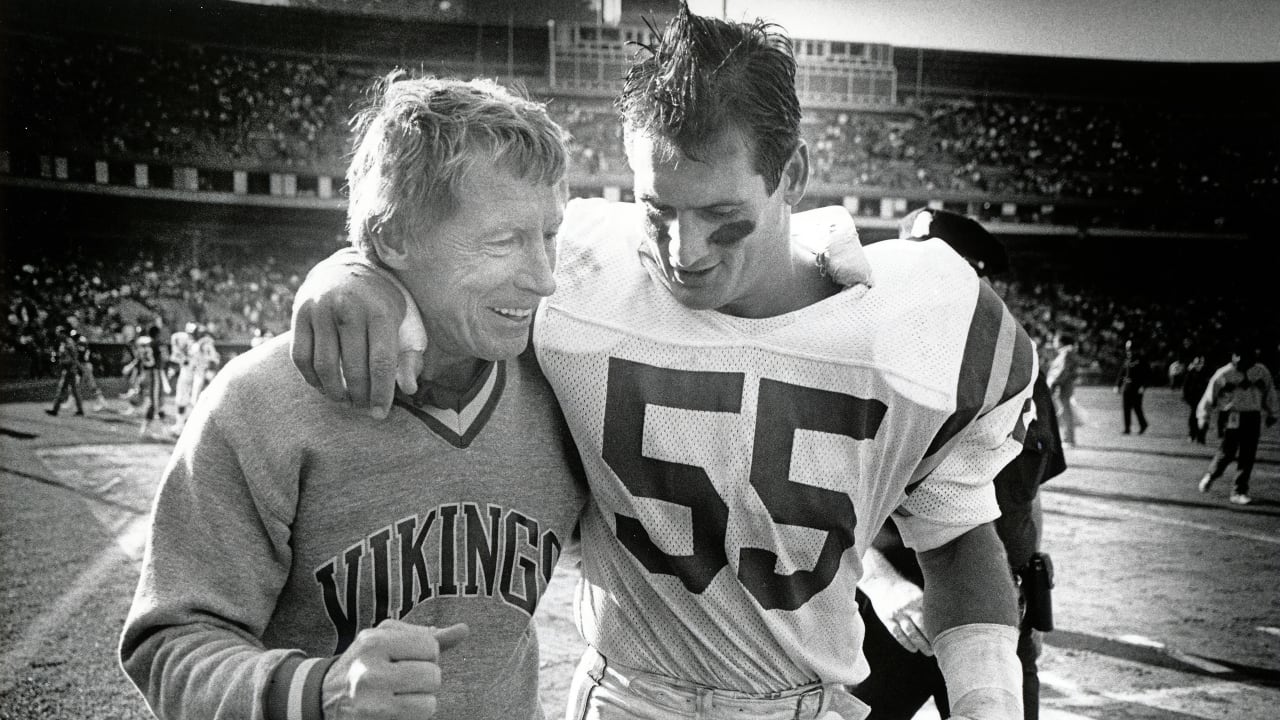 Burns was with the Hawkeyes from 1954 to 1965, spending the final five seasons as Iowa’s head coach. He then coached defensive backs for two seasons under Vince Lombardi in Green Bay, helping the Packers win Super Bowls I and II before joining Bud Grant’s staff in 1968 as the offensive coordinator.

The 18 seasons in that role for “Burnsie,” by which he’d lovingly come to be known, is the longest tenure in NFL history for an offensive coordinator with one team.

And even though Burns spent 24 total seasons with the Vikings, including 14 in which home games were played at Metropolitan Stadium, he famously was not a fan of cold weather. Burnsie frequently bundled at the first chill of autumn and preferred to spend winters in Jamaica.

The innovative coach with a passionate heart is remembered as one of the most ground-breaking offensive minds of his generation.

Burns helped usher in the single-back set and opened up Minnesota’s offense to more of a pass-heavy attack, including the use of running backs as options through the air. Chuck Foreman and Rickey Young combined for 149 receptions in 1978, the first time in franchise history in which pass attempts exceeded rushes.

Hall of Fame quarterback Fran Tarkenton absolutely loved working with Burns on the game plan each week of his final seven pro seasons. In a previous interview with the Vikings Entertainment Network, Tarkenton described his enjoyment of working with Burns.

“He’s just a special guy,” Tarkenton added of Burns. “And he’s a part of the great history of our team. He’s one of the great characters of all time.”

Burns helped the Vikings make four Super Bowl appearances and win an NFL Championship, three NFC titles and 10 division crowns in his first 11 seasons. Minnesota was a top-10 offense in points per game in seven of those seasons.

And in January of 1986, weeks before turning 60, Burns was named the fourth head coach in Vikings history after Grant’s second retirement.

“Jerry’s been a head coach; he’s worked in all facets of football,” Grant said upon the transition. “He’s as qualified as anybody that ever got a job in this business.”

The stylistic differences between Burns and Grant were stark, with the former’s unconventional nature standing in contrast to the stoic disciplinarian. Their partnership, however, led to some of the greatest seasons in Vikings history.

Burns also succeeded as a head coach. He compiled a record of 52-43 in six seasons as the Vikings head coach and led Minnesota to the 1989 NFC Central crown with a 10-6 mark. The 52 victories are the fourth-most in team history.

He additionally led the Vikings to three playoff berths, going 3-3 in postseason contests.

The highlight of Burns’ coaching career was when he led the Vikings on a magical run to the 1987 NFC Championship Game. Minnesota went 8-7 during a strike-shortened season, but pulled off upset road wins over New Orleans and San Francisco before falling one game short of the Super Bowl.

Burns retired after the 1991 season but remained a beloved figure in franchise lore to fans, former colleagues and players on offense and defense.

He proudly presented Paul Krause — a player he had recruited to Iowa — for enshrinement in the Pro Football Hall of Fame in 1998. Burns was inducted to the Vikings Ring of Honor in 2005.