FLORHAM PARK, N.J. — The New York Jets have a wide receiver problem, and it won’t be easy to solve before their season opener at the Buffalo Bills in 19 days.

Injuries have turned a thin position into a thinner position, hurting the development of the Jets’ offense and, by extension, quarterback Sam Darnold. As receivers coach Shawn Jefferson noted, “We’re under construction right now” — a kind description for one of the most unproven receiving corps in the NFL.

Jets general manager Joe Douglas, partly responsible, must figure out a way to fix it. But here’s the thing: A magical trade or a shrewd waiver pickup will be tougher than usual because of the current environment, thanks in part to the coronavirus pandemic. With no preseason games to scout, teams are flying blind as they prepare for the Sept. 5 roster cuts.

And don’t think preseason tape doesn’t matter. A year ago, the Jets made moves in late August/early September to acquire cornerback Nate Hairston (trade) and wide receivers Demaryius Thomas (trade) and Braxton Berrios (waivers) based, in large part, on how they performed in the preseason with their previous teams. I remember talking with Douglas before the roster cuts. He looked tired, as if he had been watching tape for half the night. Which he had.

Without preseason games, teams will rely on 2019 tape and training camp information gathered from sources around the league. And, yes, maybe the internet, too.

Basically, they’re looking for a need in a haystack.

Jets coach Adam Gase, who operates a three-receiver offense, is counting on Breshad Perriman and Jamison Crowder (slot) to occupy two starting roles. Perriman, still young (26) and incredibly fast, played to his first-round pedigree late last season with the Tampa Bay Buccaneers, but he has never caught more than 36 passes in a season.

He is the Jets’ WR1, aka the new Robby Anderson.

Crowder is good for another 78 catches — Jefferson thinks he could hit 90 — but who is the third receiver? It’s supposed to be 2020 second-round pick Denzel Mims, but he has yet to practice because of a hamstring injury that could effectively turn his training camp into a washout. Even if Mims returns soon, he will be way behind in terms of conditioning and grasp of the playbook.

Vyncint Smith, who made a career-high 17 receptions in 2019, was the Next Man Up. As it turned out, he was the Next Man Down. He injured a core muscle and underwent surgery, which will sideline him as long as two months.

Because of the low numbers, the Jets recently signed veteran Chris Hogan, a two-time Super Bowl champion with the New England Patriots whom Gase called a “down and dirty” competitor. Hogan, 32, is a decent add to the receiver room because of his experience and championship pedigree, but he hasn’t been an every-down player since 2018.

On most practice days, the Jets are lining up with Perriman, Crowder and Jeff Smith, a former undrafted free agent with one career catch. When Perriman missed a day with knee swelling, it served as a sobering reminder: The Jets are one injury away from a full-blown crisis.

Douglas underplayed the situation in the offseason, settling for the Perriman-for-Anderson swap in free agency without adding any other veterans of note. That he drafted only one wide receiver also came as a surprise; he put all his eggs in the Mims basket. Rookie receivers have a tough transition, especially when they come from a wide-open passing conference such as the Big 12, as Mims did at Baylor. Maybe Douglas was banking on a repeat of the 2019 draft, which yielded a handful of quality wideouts who produced immediately. 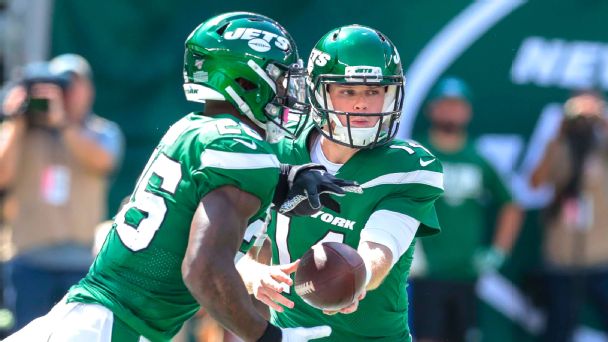 A year ago, Douglas showed his aggressive side in the preseason, addressing needs with a flurry of deals. The Jets have extra draft capital in 2021, including five picks in the first three rounds, but he probably won’t trade a premium asset for a one-year rental. Forget about Pittsburgh Steelers wide receiver JuJu Smith-Schuster, Darnold’s former college BFF at USC. Why would the Steelers deal their top target knowing quarterback Ben Roethlisberger‘s window is closing?

If the Jets make a trade, it likely would be a minor deal. Keke Coutee (Houston Texans) and David Moore (Seattle Seahawks) could wind up on the trading block. Other receivers who could shake free are Mohamed Sanu Sr. (Patriots), Tim Patrick (Denver Broncos), Bennie Fowler (New Orleans Saints), Dante Pettis (San Francisco 49ers) and Robert Foster (Bills). The Jets liked Phillip Dorsett in free agency. If he doesn’t stick with Seattle, he’d be a name to watch.

Alshon Jeffery (Philadelphia Eagles) will get bandied about because of his past associations with Douglas and Gase, but he’s 30 years old with a $9.9 million salary (guaranteed) and coming off Lisfranc foot surgery. Another receiver from Douglas’ past, Nelson Agholor (Las Vegas Raiders), might be worth a look if he doesn’t make coach Jon Gruden’s cut.

In the end, maybe the Jets will stand pat, use Hogan in the Demaryius Thomas role (see: 2019) and wait for Mims to get healthy. It’s risky, and it doesn’t help Darnold. Asked what he would say to fans to ease their concerns, Jefferson said:

“I’m a brutally honest person: We’re not proven, we’re a brand-new group. … My answer to Jets’ fans is, ‘You guys are right.'”

Jefferson quickly added Perriman and Crowder form a solid foundation and that it’s on the young players to step up. That’s an optimistic coach talking.

The reality? Douglas needs to get on the phone.