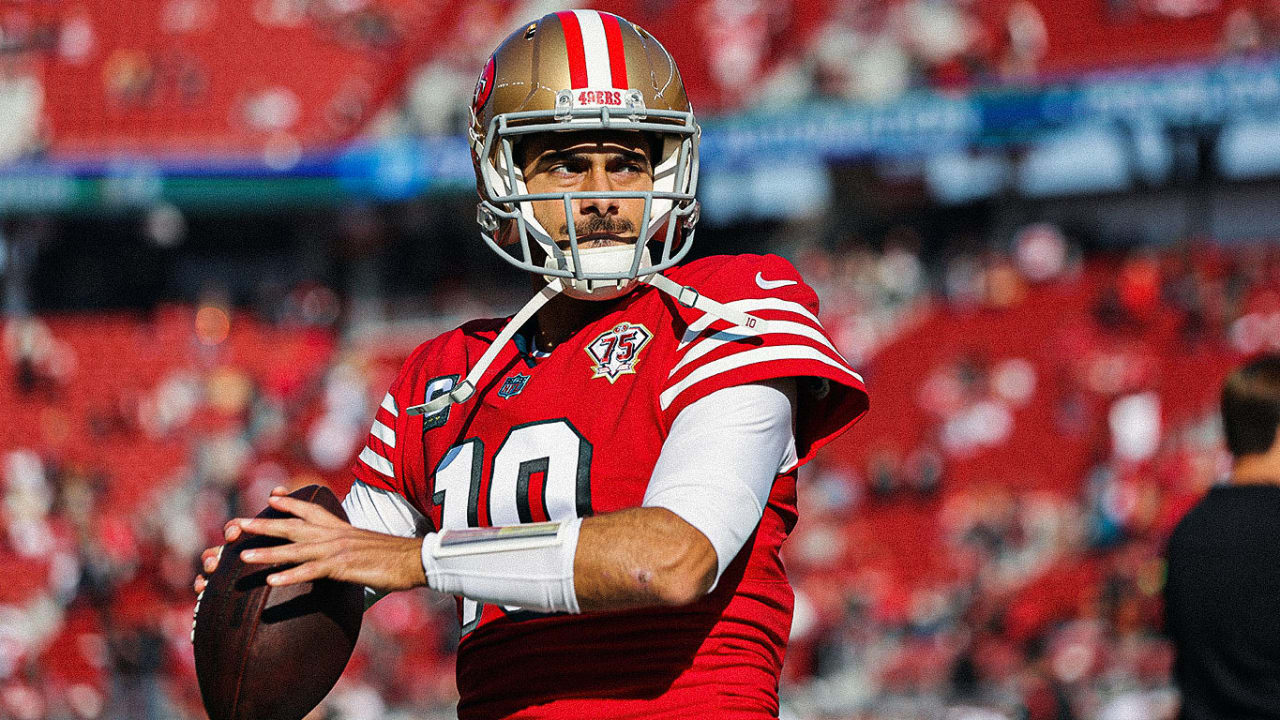 Jimmy Garoppolo will practice for the first time since Dec. 23rd – his last healthy outing since suffering a right thumb sprain. In the second quarter of the 49ers Week 16 loss against the Tennessee Titans, Garoppolo’s Grade 3 sprain of the ulnar collateral ligament hampered his performance in the rest of the game and ultimately kept him out of San Francisco’s matchup against the Houston Texans.

Per head coach Kyle Shanahan, the quarterback had an opportunity to test his right hand earlier in the week, making him “good enough to be limited” during the team’s first practice on Wednesday.

“We’ll put Jimmy in on what he feels comfortable with doing with where he’s at today,” Shanahan said of Wednesday’s practice reps. “Trey Lance will get the rest I’m sure. Trey will get the majority, but we’ll see how it is when (Jimmy’s) out there. Mainly just communicating with him through the practice. Everything today won’t be a full speed practice, so it’s not as challenging.”

Per the quarterback, his rehab and recovery haven’t been a cake walk, noting the pain of working through his injury. Heading into his potential return to the field, Garoppolo has been working on getting back to the fluidity of his throwing motion, which will be a key factor into his impending availability in the team’s must-win finale against the Los Angeles Rams.

Shanahan said he hasn’t decided on which quarterback will start against the Rams on Sunday, and is likely to take his decision to gametime.

Running back Elijah Mitchell will be held out of practice on Wednesday as the team continues to monitor his knee injury. Mitchell missed three games prior to his return on Sunday and the team will likely be strategic in his involvement heading into the weekend.

The same goes for left tackle ﻿Trent Williams﻿, who sustained an elbow injury in the 49ers Week 17 win over the Texans. Williams is not expected to practice on Wednesday, however, Shanahan isn’t too concerned the injury will impact his availability for Sunday’s tilt.

In other news, rookie corner Ambry Thomas was placed on the Reserve/COVID-19 list, adding to defensive backs Jimmie Ward﻿, Dontae Johnson and K’Waun Williams﻿. Per league rules, all four players have the potential to return to the field in advance of Sunday should they pass testing protocols. ﻿Deommodore Lenoir ﻿ was added to the list on Wednesday, removing his chances of playing on Sunday.

While the status of several key defensive players is still up in the air, the 49ers could see the return of a handful of others. Defensive lineman Maurice Hurst (calf), linebacker Dre Greenlaw (groin) and safety Talanoa Hufanga (knee) will return to practice on Wednesday in a limited fashion. In addition, the team has opened the practice windows for cornerback Emmanuel Moseley﻿, wide receiver Mohamed Sanu Sr. and safety Tavon Wilson on Wednesday.

Tags: his practice will