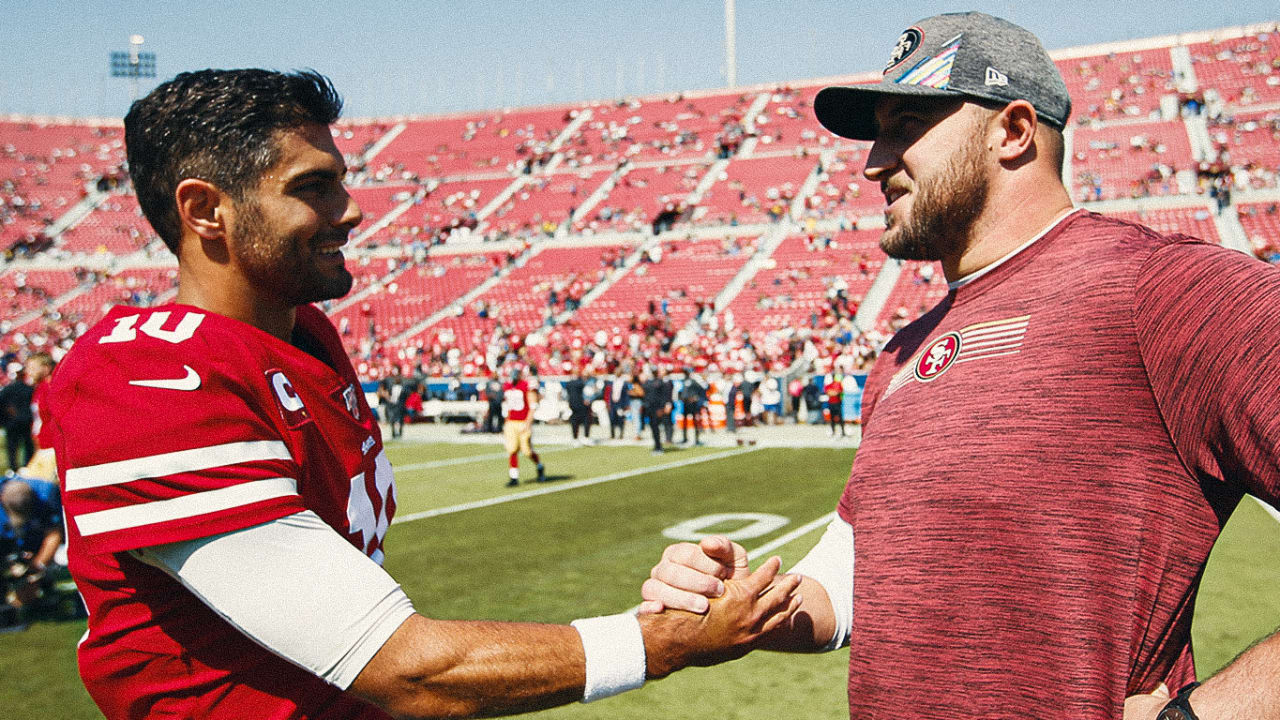 This week, Joe Staley has been making his media rounds after being inducted into the Senior Bowl Hall of Fame and stopped by as a guest on “NFL Total Access” to discuss his latest honor and give updates on his retirement.

As expected, the former left tackle was also asked about the state of the current San Francisco 49ers roster, specifically, the alluring competition under center between Jimmy Garoppolo and rookie quarterback Trey Lance﻿.

Staley spent three seasons protecting Garoppolo’s blind side and has witnessed the team’s success with the quarterback on the field. Contrarily, he has also seen Garoppolo’s struggles with remaining on the field.

With Garoppolo as the starter, the 49ers boast a 22-8 record (24-9 including the postseason). Without Garoppolo in the lineup, San Francisco is 7-26. Despite starting 30 games since joining the 49ers in 2017, Garoppolo has missed 23 due to various injuries.

“He’s been a winner when he’s been with the San Francisco 49ers,” Staley said of Garoppolo. “He hasn’t been available in a lot of games and I think that’s what the Niners did with drafting Trey Lance. It’s a little bit of an insurance policy. But Jimmy is going to give every opportunity to win that starting job for training camp.”

Garoppolo’s availability played a part in the 49ers decision to jump nine spots in the 2021 NFL Draft. San Francisco zeroed in on the North Dakota State product with the third-overall pick this past April.

While the 49ers believe Garoppolo still gives the team the best chance to win in 2021, they also welcome the competition between the two signal callers. Since Lance’s arrival, San Francisco has seen Garoppolo elevate his game during the 49ers offseason program.

Kyle Shanahan took note of the quarterback’s performance, saying Garoppolo “had his best spring” since joining the 49ers. While Staley may no longer be in-house, he believes the spirit of competition will prove beneficial for Garoppolo heading into 2021.

“I think it’s good for him because honestly, as a player myself, I felt entrenched as a left tackle,” Staley continued. “But when I would get guys that came in as rookies trying to vie for my job, it definitely pushed you a little bit more in training camp. The competition just breeds more success on the football field if you frame it the right way. And I know Jimmy will.”

With regards to Lance, you can turn on the tape and see why Shanahan believed the rookie was worth the investment. His physical abilities, arm talent and mental makeup are just a few of his traits that offensive coaches covet in a quarterback.

Staley, too, can see what makes the North Dakota State product a good fit in San Francisco. Closing out the final three of his 13-year NFL career in the 49ers new regime, the left tackle believes the rookie has the attributes to flourish in Shanahan’s system. And like the rest of the Faithful, Staley is just as intrigued with how the 49ers quarterback situation unfolds in 2021.