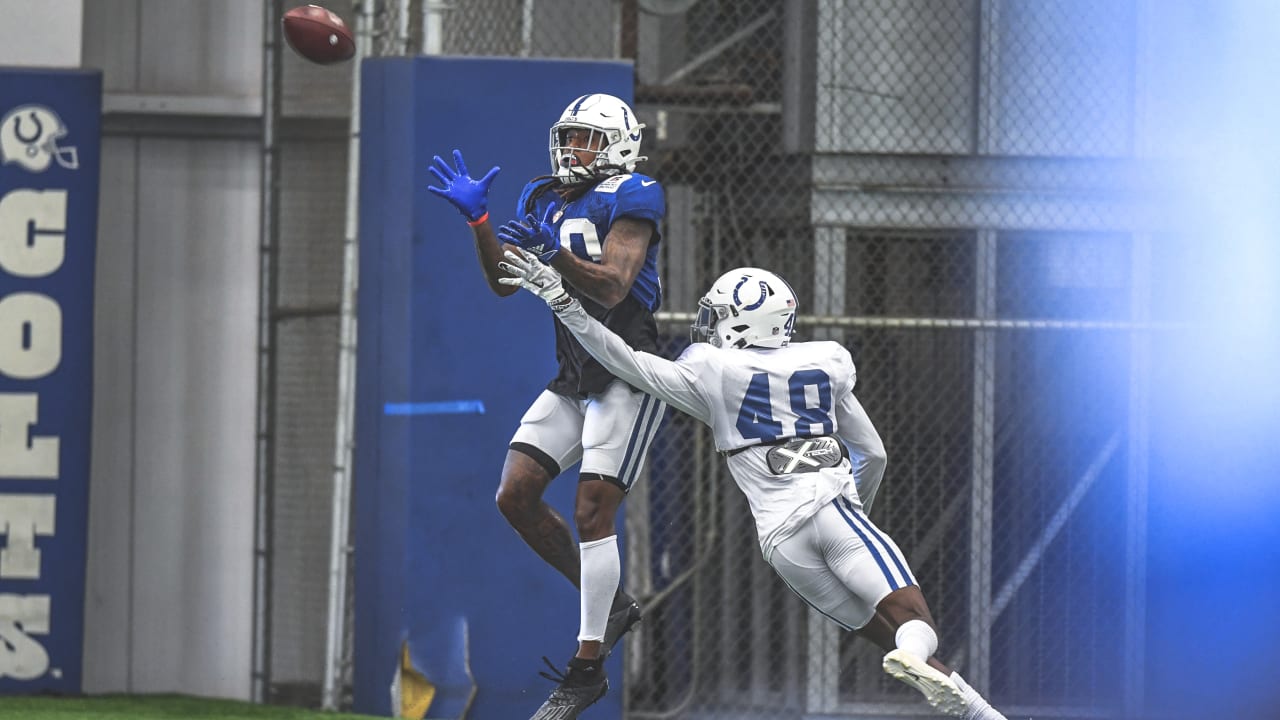 » The battle for the No. 3 quarterback job brought out some terrific throws from both Jacob Eason and Chad Kelly on Tuesday. Kelly on one play had plenty of time to scan the field and ultimately find rookie wide receiver DeMichael Harris for about 25 yards; later in a team drill, Kelly worked through his options and ultimately delivered a strike down the right sideline to wide receiver Daurice Fountain. The throw was placed just out of the reach of cornerback Travis Reed for a gain of about 25 yards.

» Eason had an impressive all-around play to Fountain during 7-on-7s, as the receiver had broken free in a zone between Reed and safety George Odum near the sideline and was able to make an impressive toe-tap catch to stay inbounds for another gain of about 25. On the very next play, Eason unleashed a bullet through a tiny window to wide receiver Chad Williams, right between the covering cornerback Tremon Smith and linebacker Zaire Franklin.

» A little side note: it’s just nice to see Fountain back and making plays on offense with a smile on his face. He was having such a terrific all-around camp last year when he suffered a gruesome season-ending ankle injury, and he’s had to work extremely hard to get back to this point. Kudos to Fountain for his hard work, determination and positive attitude throughout some understandably tough times over the last year.

» Another day, another Tyquan Lewis flash play. Lewis has seemingly had at least one big-time play each of the last three practices, and that continued today when he absolutely blew up a double team effort on the inside by the center, Eldrenkamp, and right tackle, Carter O’Donnell, to wrap up Taylor for a loss of about five yards.

» Linebacker Matthew Adams had a nice little pop on Doyle during a 7-on-7 drill, sending the veteran tight end to the turf. Doyle hung on to the pass, and then banged shoulder-to-shoulder with Adams on his way back to the huddle as if to acknowledge, “Yeah, nice hit.”

» Wilson was able to earn his second interception of Rivers in three days on Tuesday. This time, Rivers faked the handoff to Mack and tried to hit Doyle over the middle, but the pass sailed on him, and Wilson was able to make a diving catch to secure the pick. While the 30-year-old safety was just signed to the team recently, he certainly seems to already be making an impact both on and off the field as a saavy veteran.

» The Colts’ defense almost had another takeaway to end the day. Brissett found fullback Roosevelt Nix on a crossing route, and after bumping into one defender, Nix had the ball poked out by Franklin near midfield. Tackle Andrew Donnal had a heads-up play to dive on the loose ball and save the offense from a turnover, however.