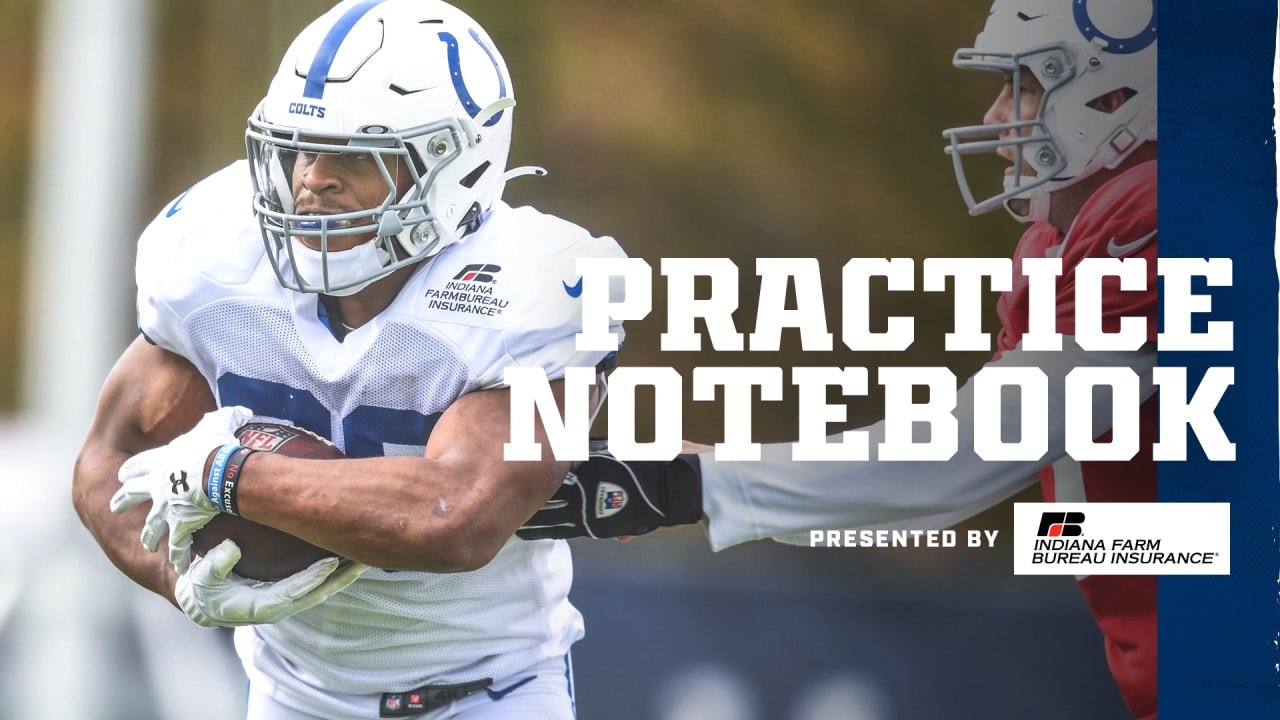 — A reminder that the Colts are conducting walkthroughs due to the short week, but a promising sign on offense nonetheless that top receiver T.Y. Hilton, who missed Sunday’s Week 9 loss to the Baltimore Ravens with a groin injury, has been estimated to be a full participant the first two “practices” this week.

Hilton said today he feels “very close” to a potential return, but is not yet sure whether that will come Thursday night.

“I did some good things last week, did some great things today,” he said. “It’s up to the coaches and the doctors.”

— Tight end Mo Alie-Cox, who has been battling a knee injury going on a few weeks now but still played Sunday against the Ravens, was able to go from being estimated as a non-participant on Monday to a limited participant on Tuesday.

— Tight end Jack Doyle, meanwhile, was estimated as a non-participant for a second straight day on Tuesday, as he tries to work his way back from a concussion. Head coach Frank Reich had already indicated earlier in the week it wasn’t going to be likely that Doyle would be available by Thursday night against the Titans.

The Colts entered the 2020 season with high hopes at the running back position, where they could feature their “1-1” punch in veteran Marlon Mack and 2020 second-round pick Jonathan Taylor.

Mack would be the starter, while Taylor would get plenty of prime opportunities to get sprinkled in throughout each ballgame, and then from there Reich could ride the hot hand on any given day.

But, as they’re known to do in the NFL, plans quickly changed. After a terrific start to the game, Mack would suffer a season-ending Achilles injury in the Colts’ 2020 season opener against the Jacksonville Jaguars, propelling the rookie Taylor into the starting role, where he’s remained ever since.

Taylor seemed to be showing clear improvement from Weeks 2 through 6, when he had 80 total carries for 345 yards — an average of 4.3 yards per attempt — and three touchdowns, while also adding 10 receptions for 90 yards.

But Taylor simply didn’t have his best of performances Week 8 against the Detroit Lions — he finished with 11 carries for 22 yards — and Reich would end up turning to third-year veteran Jordan Wilkins, who had 20 rushing attempts for 89 yards with a touchdown and a two-point conversion that day.

Then, on Sunday against the Baltimore Ravens, Taylor had a solid start, with five rushing attempts for 26 yards (5.2 avg.) and a touchdown in the first quarter, but would end up having the first fumble of his NFL career returned 65 yards for a touchdown late in the period; Taylor had just one more carry the rest of the ballgame in the Colts’ 24-10 loss.

Now halfway through his rookie year, some players might’ve lost a little bit of confidence after two straight games like that. But Taylor certainly is remaining confident and optimistic heading into the second half of the 2020 season, which kicks off Thursday night against the Titans.

“So far through my rookie season, it’s been a progress,” Taylor said. “Of course, coming in, I wasn’t expecting to have the role or be put in the position I’m put in right now being as though we dearly, dearly miss Marlon (Mack). But having to adjust into a role that I’m in right now, it’s been skewed, especially the circumstances to come in with no offseason reps beside virtual. It’s really learning on the fly and one of the biggest things is you have to study, you have to know everything that is going on because the team is counting on you – not only me, but the rest of the running back group as well and everyone else on the team in order to come in and know exactly what they need to do without having those offseason reps.”

Taylor said he continues leaning on his veteran teammates on a weekly basis.

“I think that’s one of the biggest areas where I’ve actually grown is that I’ve had a lot of older teammates, a lot of vets, every single day giving me little bits, pieces and nuggets of knowledge and information so that I don’t have to learn that on the fly,” he said. “It’s being given to me which I’m really grateful for. I definitely think that there is still a lot of improvement to go, but if I’m able to still lean on my teammates how I have been the first half of the season, I think the second half will be OK.”

Reich acknowledged Taylor is adjusting to a “different role” than he would’ve been used to in college at Wisconsin, where he was the team’s main running back no matter what for the better part of three seasons.

But Reich said the rookie has never wavered in buying into the best role for him and for the team at this point of the season.

“Jonathan is – as you guys know – the real deal not only as far as a player, but as far as a person,” Reich said. “It’s just part of the process of becoming a pro and I’m thankful for him. I’m thankful for not only the player he is, but the kind of teammate he is – that he still has that fire. I know he wants the ball 30 times a game like he got it in college, but he is willing to play the role that he is in right now and grow into it. I’m very confident it is going to work out for Jonathan in the long run.”