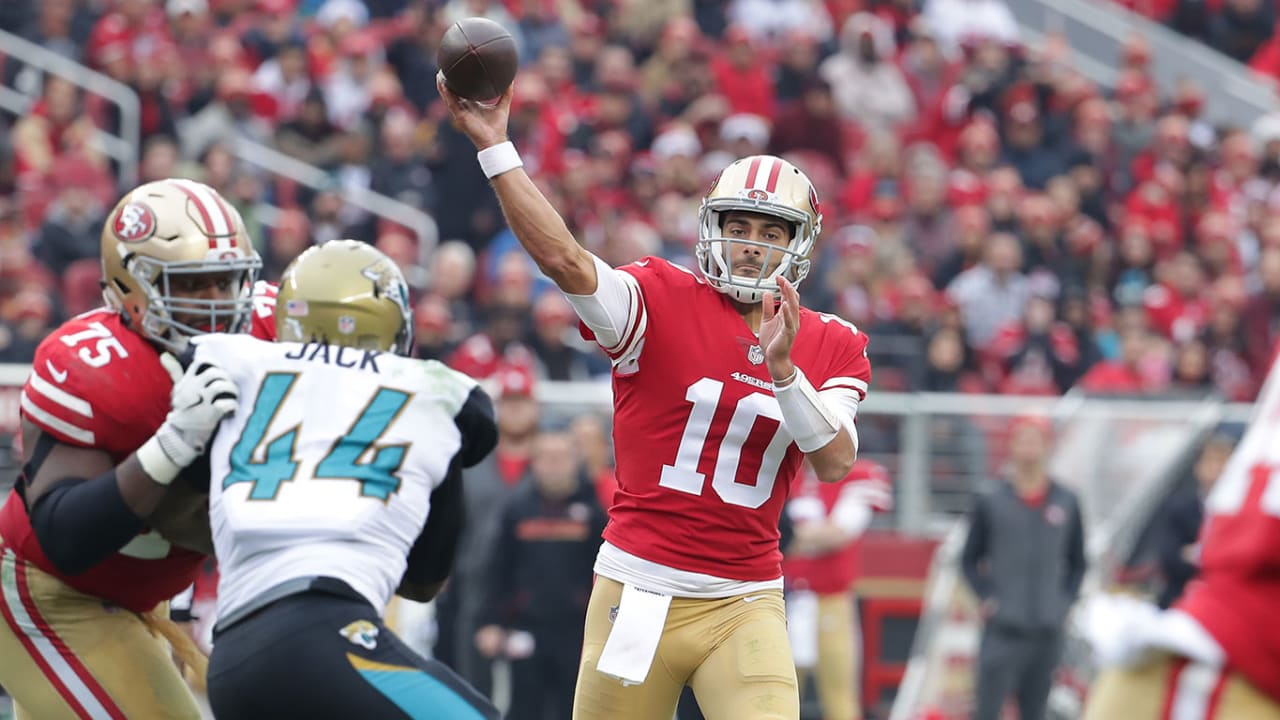 1st Down: Assessment of the Quarterback Position and Expectations for Sunday

﻿Jimmy Garoppolo﻿ has found his groove as of late and, optimistically, his recent success will continue to roll on as the 49ers look to build off of that momentum heading into the second half of the season. The quarterback has been decisive and efficient while playing a clean game of football, leading the 49ers to two wins over the last three weeks.

What ultimately stands out from Garoppolo and Co.’s last win was their ability to convert on money downs. Third and fourth downs have been a major area of concern to start the season but the team has appeared to turn a page. And the bulk of those plays coming by way of Garoppolo’s arm.

One of the biggest questions that still remains is when will 49ers fans finally get to see ﻿Trey Lance﻿ take charge of the offense. While I still expect Kyle Shanahan to draw up some packages for the rookie QB, if Garoppolo continues his strong play, Lance’s appearances could become fewer and far in between, barring garbage time play.

Lawrence, the No. 1 overall selection in the 2021 NFL Draft, is having a rookie season similar to that of many young quarterbacks – a mix of big, spectacular plays and rookie mistakes. He had turnover issues to start the season, improved dramatically on those and had a very encouraging three-game stretch against Cincinnati, Tennessee and Miami in which his passer rating was more than 90 in each game. His rating has been under 70 in each of the last three games, and some accuracy issues during that span have caused him to come under some criticism from Jaguars fans and observers. But the issue with Lawrence has been as much about drops from Jaguars receivers and an inability of those receivers to make plays deep down the field. That has caused teams to be able to defend the Jaguars too easily and has contributed to Lawrence’s struggles in recent games.

2nd Down: Biggest Area of Concern Heading into Sunday

While last week’s game against Los Angeles was influenced by the Rams having to play catch up for the entirety of the contest, San Francisco’s run defense hasn’t been their strongest suit this season. The 49ers have allowed a rusher at least 80 yards in five of their last nine games while giving up an average of over 122 yards per game, the 23rd-worst mark in the league. Even with the Rams posting just 52 net rushing yards, the 49ers were allowing over 5 yards per carry.

While there are questions surrounding running back James Robinson’s availability on Sunday, who did not practice early in the week with a heel/knee injury, he’s been one of the bright spots in Jacksonville’s offense. Robinson is averaging 5.4 yards per carry and has also been involved in the Jaguars passing game while totaling 699 yards from scrimmage. While his status is up in the air, limiting Jacksonville’s ground game will be a point of emphasis regardless who is getting the carries on Sunday.

The offense is unquestionably the Jaguars area of concern. They have yet to score more than 23 points in a game this season – and while the team has played some of its best football in recent weeks, the offense during that span has averaged 11 points per game. One reason for the recent downturn: a heel injury that kept running back James Robinson – the offense’s best player – out for three quarters in a loss to Seattle and the entire game in a victory over Buffalo. The aforementioned issues at receiver also have contributed to the offensive struggles. This is a team that can sometimes piece together extended drives – particularly if Robinson is healthy – but the inability to hit big plays in the passing game has made it difficult to break out offensively.

3rd Down: Area of Strength for Heading into Week 10

Despite coming off of a full-team effort on Monday night, there are still plenty of areas the 49ers can improve on. But one that most Faithful hope has turned the page for the better is San Francisco’s passing defense.

Although San Francisco’s defensive line is winning 41 percent of their pass rushes (17th in the league), the unit is in part responsible for San Francisco’s success at limiting opposing quarterbacks. Through 10 weeks, the 49ers have held passers to under 209 yards a game, the 6th-best mark in the league.

Injuries have forced the 49ers to rotate players throughout the year, beginning with the Week 1 loss of veteran corner ﻿Jason Verrett﻿. ﻿Josh Norman﻿, ﻿Emmanuel Moseley﻿, ﻿K’Waun Williams﻿, ﻿Jimmie Ward﻿ and ﻿Jaquiski Tartt﻿ among others have been in and out of rotation due to various ailments. But despite the carousel of starters, the secondary has still found success. Last week, they limited Matthew Stafford to a season-low 243 passing yards and a 64.7 quarterback rating on the day that featured two interceptions. With the hopeful return of key starters, the cohesion of the unit only continues to improve, which will optimistically bode well for San Francisco’s defense in the long run.

This is unquestionably the defense. After struggling early in the season, the defense has developed dramatically in the last three games – holding Seattle to seven second-half points, holding Buffalo to two field goals and holding Indianapolis to one offensive touchdown. The Bills and Colts entered their games against the Jaguars as hot as any offenses in the NFL, and there was nothing fluky about the Jaguars performances in those games. The defense is ranked 11th in the NFL against the run and has improved significantly in the last three games against the pass. The defensive line has gotten very good pressure the last three weeks, with defensive end/linebacker Josh Allen – the No. 7 overall selection in the 2019 NFL Draft – fulfilling his draft status and showing signs of being an All-Pro-level player.

4th Down: Matchup You’re Looking Forward to Most

San Francisco’s offensive line had two of their best outings over the last three weeks. The first, coming in Week 8 against the Chicago Bears, as the unit kept Garoppolo on his feet for the entirety of the contest while opening up a 145-net yard performance in the run game. The second, and most notable, came against the Rams, where the line allowed just one sack and one quarterback hit against the league’s top-ranked defensive unit featuring the likes of Aaron Donald, Leonard Floyd and newcomer Von Miller.

Sunday presents another challenge against a Jacksonville defense that has limited opponents to under 230 yards over their last two games. Their success, in part is thanks to Josh Allen, who’s strung together several dominant outings. So far this season, he’s registered 5.5 sacks, 12 quarterback hits and 41 tackles through nine games.

If San Francisco’s O-line can continue keeping their quarterback upright and find a rhythm in the run game, it will certainly aid the offense in picking up where it left off last week against a Jacksonville defense that’s allowing over 366 yards per game this season, ranked 20th in the league.

The defensive front was a major offseason focus for this team, and the improvement in the run defense from 30th in the NFL last season is a major reason the franchise overall feels as if it’s beginning to improve. And the defensive line has legitimately improved, with multiple players in addition to Allen – players such as Taven Bryan, Malcom Brown, Dawuane Smoot and Roy Robertson-Harris – starting to make an impact. But the 49ers will be a real test, with 49ers head coach Kyle Shanahan representing a challenge physically and mentally to a defense that rarely faces that style of run offense.