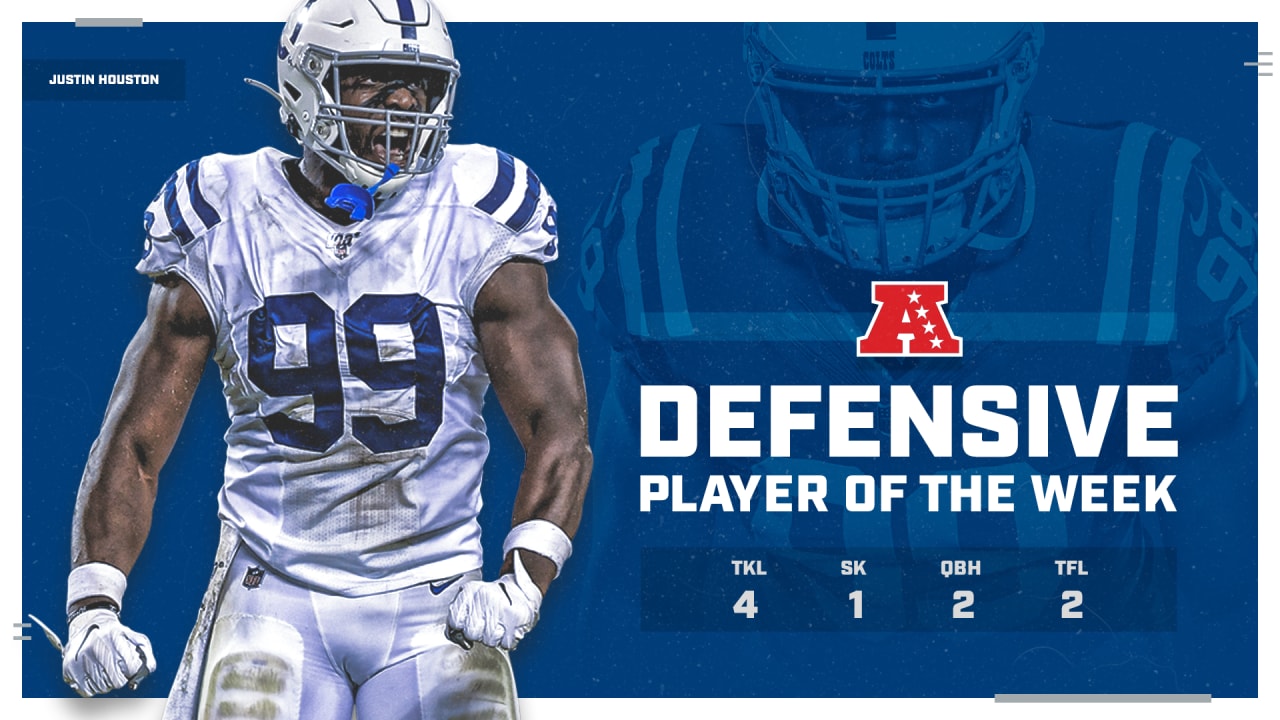 INDIANAPOLIS — Justin Houston couldn’t be happier about leaving Kansas City Sunday night with a win over his old team.

But his bye week just got even better.

The National Football League announced this morning that Houston has been named the AFC’s Defensive Player of the Week.

It’s the third AFC Defensive Player of the Week award for the veteran defensive end, who last earned the recognition back in Weeks 1 and 3 of the 2013 season.

Houston was a key part of the Colts’ huge 19-13 road victory over the Kansas City Chiefs on Sunday night, as he finished with four total tackles (two for a loss) with one sack, two quarterback hits and three hurries.

But it was Houston’s final play of the night that put a dagger in the Chiefs’ late comeback hopes. Down six, 16-10, Kansas City faced a 3rd and 28 from its own 7-yard line when quarterback Patrick Mahomes was able to find wide receiver Byron Pringle down the middle for a big gain.

Thankfully for the Colts, safety George Odum was there to make a huge tackle on Pringle at the 34-yard line, just short of the first-down marker.

So now, facing a 4th and 1 situation, the Chiefs elected to hand the ball off to running back Damien Williams. But that’s when Houston came charging in untouched off the edge to bring Williams down for a loss of one, forcing a critical turnover on downs.

The Colts would get a 29-yard Adam Vinatieri field goal seven plays later to put the game out of reach.

The win for the Colts (3-2) had a little extra meaning for Houston, who was selected by the Chiefs in the third round of the 2011 NFL Draft and had spent the first eight seasons of his career in Kansas City, racking up 78.5 career sacks. But in March, in a cost-cutting move, the team decided to release the pass rusher, who signed with Indy about two weeks later.

Colts head coach Frank Reich said he could sense just how happy Houston’s teammates were to get a big win for No. 99 on Sunday night. After all, by handing the Chiefs (4-1) their first loss of the season, and by limiting their high-powered offense to just 13 points, the Colts were responsible for snapping Kansas City’s NFL record streak of 22 straight games of scoring 26 or more points.

“They know the quality of player and person he is, and probably most of the guys — or at least a good portion of the guys and coaches — have had an experience of going back and playing against a team that you played for, so we all kind of know what that feels like,” Reich said of Houston. “And for Justin to have been such a significant part of the success that they’ve had at their place, now to come back in here with the win that was pretty special for him, and we’re all happy for him.”

Off in Week 6, Houston and the Colts next take on the Houston Texans (3-2) on Oct. 20 at Lucas Oil Stadium. Click here to get your tickets to this AFC South showdown.