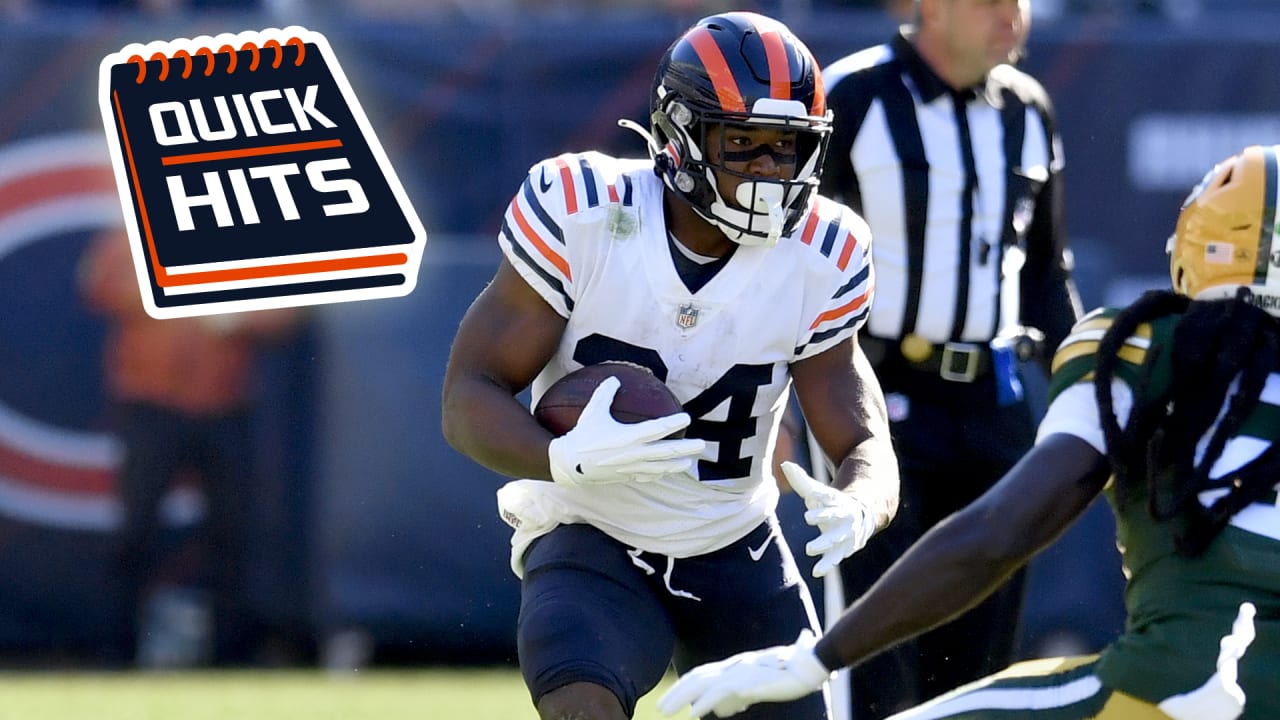 Against the Packers, Herbert had a 25-yard run and averaged 5.1 yards per carry. He scored his first NFL touchdown on a 1-yard run on the Bears’ opening possession of the game and later had an apparent 16-yard TD nullified by a holding penalty on ﻿Sam Mustipher﻿.

“I really liked the way that he ran the football,” said coach Matt Nagy. “It was just like last week; when he makes the one cut and sticks that left or right foot in the ground he gets vertical … We need him right now.”

“It’s not surprising,” added quarterback ﻿Justin Fields﻿. “We know how talented he is and we know what he brings to this offense. He’s a power back. He has great instincts on running the ball and juking moves. He’s a great player.”

Free play that wasn’t: The only turnover of the game came on the Bears’ second possession when Fields thought he had a free play and threw the ball deep into the end zone, where it was intercepted by safety Darnell Savage.

When a Packers defensive lineman appeared to jump offside, Mustipher snapped the ball as he’s instructed to do in that situation. But no flag was thrown.

“He came across the football, I thought it was a free play,” Mustipher said. “I snapped the football. That’s why Justin threw it up.”

“That’s a play we practice all the time,” added tight end ﻿Cole Kmet﻿. “When the guy jumps, Sam’s going to snap it. And we know when Sam snaps it, just take off and go and Justin’s going to take a shot downfield. We definitely thought we had them offsides. But obviously not there. Really unfortunate.”

The Bears led 7-0 at the time and had reached the Packers’ 47. An offside penalty on Green Bay would have resulted in third-and-two from the Green Bay 42.

“That play took a little bit of momentum from us because we were rolling,” said receiver ﻿Darnell Mooney﻿. “We don’t know if we would have scored on that drive or whatever, but we were rolling.”

Seeking consistency: The Bears offense looked impressive on its two touchdown drives, marching 80 yards in the first quarter and again in the second half. But on the unit’s other six possessions in the game, the Bears failed to advance past the Packers’ 30.

“Consistency; that’s it,” Fields said. “We’ve got to keep putting the points on them, especially with a quarterback like Aaron [Rodgers]. We’ve just got to capitalize on every possession we get. We’ve got to get points up. We’ve definitely got to get better.”

Grit and toughness: Playing through injuries, outside linebacker ﻿Khalil Mack﻿ and defensive tackle ﻿Akiem Hicks﻿ both recorded sacks of Rodgers. Mack did not practice all week due to a foot injury, while Hicks returned Friday on a limited basis for the first time since hurting his groin Oct. 3 in a win over the Lions.

Say what: After Rodgers’ 6-yard touchdown scramble late in Sunday’s game iced his 22nd win in 27 career starts against the Bears, he shouted to the Soldier Field stands, “I still own you!”

Asked for his reaction, Nagy said: “I just think for us we worry about what we do. I didn’t see any of that or anything like that. For me, my biggest thing right now is whatever we can do to get better and win every game, including Green Bay, we need to do it.”

Tags: had he when

News, notes and nuggets from the Chicago Bears’…