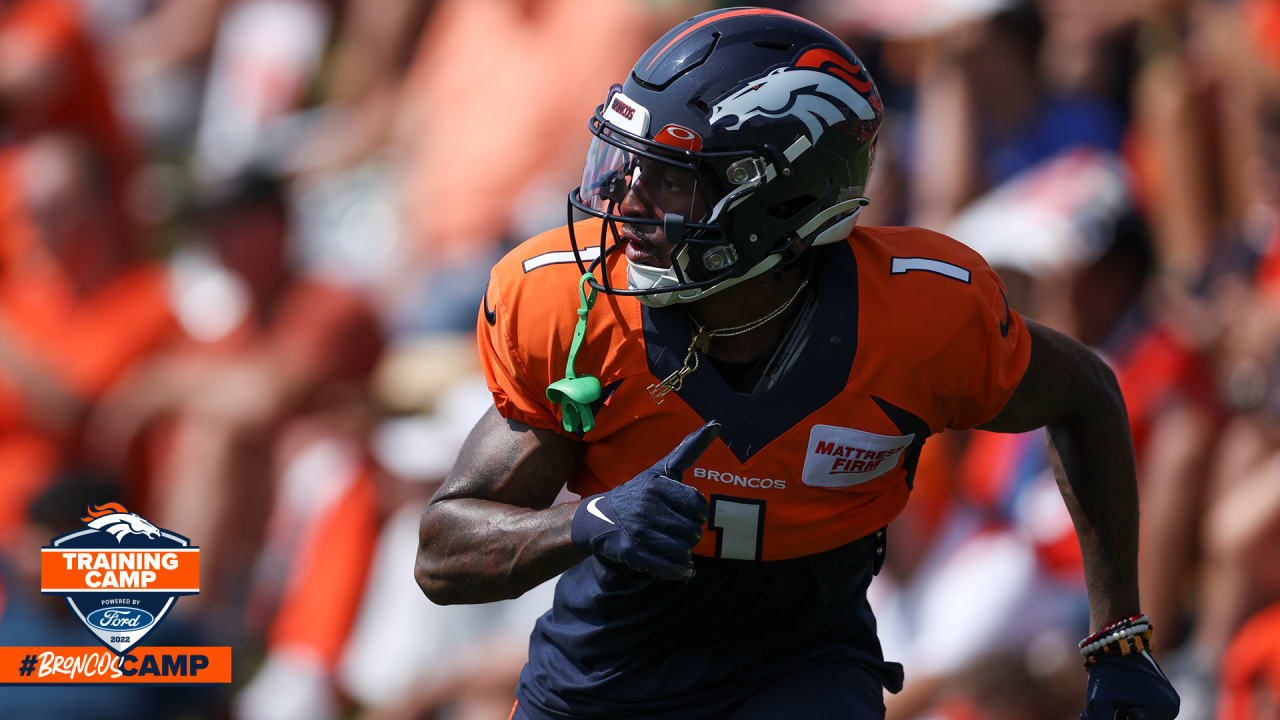 ENGLEWOOD, Colo. — For the first time in nearly 11 months, KJ Hamler donned pads and jogged onto a football field on Monday.

The third-year wide receiver, on the heels of a brutal ACL and hip injury he suffered last season in Week 3 against the Jets, took the next step in his path toward a return.

It hasn’t been an easy journey.

Though Hamler’s timeline for a return is of importance for the Broncos — Hamler said he would be ready for Week 1 but is unsure of his preseason plans — it paled in comparison to the strength he showed in recent months. In a nearly 15-minute long press conference, Hamler spoke candidly about the difficulties he’s faced since his injury and since losing his grandmother late last year.

“It’s been a tough journey, to be honest,” Hamler said. “There was such much stuff I was dealing with and being piled up on top of each other. At one point, just dealing with the ACL and then some more things [with] family situations. The love of my life passed — my grandmother — so that was the toughest thing. That was on my back for a while. I wish I never did it by myself. I wish I would have asked for help, because it was at one point in my life—and I’m going to just be honest with you all because I’m more vulnerable and more confident in myself by just saying it — at one point, I didn’t want to be here. I didn’t want to be in this world. There was one point where I didn’t want to be heard from anymore because I lost my granny, and that really hurt me. God gave me the strength to just get out of that hole because he knew I was strong enough to get through [it]. I didn’t feel like I was at the time. Just getting out of that hole was very hard, very tough. Just having all of these things going on and piling on top of each other, it was a hard process. Just to see where I am at from where I started and where I’m at now, [it’s] been a big change. I’m proud of myself and I know my grandmother is proud.”

Hamler said he suffered from depression, and he tried to fight through that pain alone. On Monday, he repeatedly emphasized that it was OK to ask for help.

“I was just in a cocoon, wrapped up,” Hamler said. “I just kept everything to myself. I feel like, as a man, we always say to be tough or just block everything out. [People say,] ‘You have to be a man; you have to be tough.’ That’s just not the prime example of a masculine man. Sometimes, you have to let it out. Sometimes you need help, and I’m just starting to learn that now. At the end of the day, I talked more. I was in therapy. I checked into therapy. I talk to my guys more, talked to my mom, talked to my dad and all the people that care about me here because I don’t have any family out here. [I’m] just trying my best to be a better version of myself.”

And while Hamler was at times isolated from his teammates last year as he rehabbed his injury, he said football played a major factor in helping him heal.

“Most everybody, especially on the team, I tell them I love them every day,” Hamler said. “You’ll never know when your last day is, and I started to appreciate that more as I got older. I feel like when we’re younger and we’re kids, we don’t realize how much your dad or your mom wants you to call and check up on them and say, ‘I love you. I miss you. That’s all I wanted to say.’ That means a lot. I take every day, every step [as] I’m blessed, because I can get out of bed and walk on two feet. Some people can’t do that. I’m just very blessed right now that I’m even out here in front of y’all, talking to y’all and just being out here just to play ball. Football brought me back to life, and I’m grateful.”

Hamler said he’s now “a lot better” and “a lot happier” than he was last year, and he emphasized that he’s “climbed out of that hole.” But as he moves forward in his recovery, he said he’ll be there for teammates who may face a similar challenge while injured.

“I feel like you need somebody at that time,” Hamler said. “You don’t need to always be alone. You don’t need to always isolate yourself. I kind of learned the hard way, because that’s what I’ve always done. I’ve always got through things by myself. I wish I wouldn’t have. I wish I wouldn’t have. But God gave me the strength just to reach out and start branching out and just reaching out to people just to help. It’s OK to ask for help sometimes. So yeah, I’ll for sure be that person.”