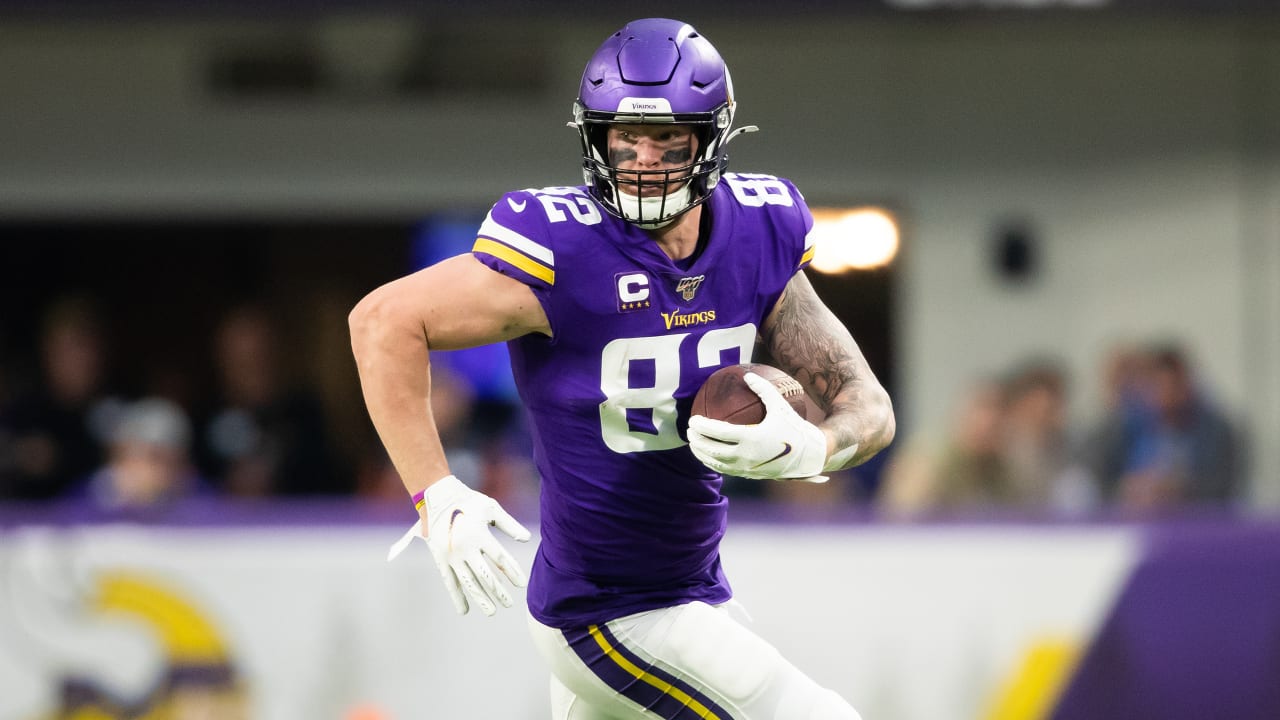 Rudolph has recorded 425 career receptions, 4,154 yards and 47 touchdowns, moving up the franchise leaderboard in all three categories. The catches and touchdowns rank fifth in Vikings history, and the yards are 10th.

Perhaps the most impressive and least likely number Rudolph stands to hit during Kickoff Weekend is his 82nd consecutive start, which will match his No. 82 jersey that he selected over 86 when he arrived in Minnesota after wearing No. 9 at Notre Dame.

“I wore 9 my entire life, so I didn’t really have a number in the 80s that drew to me,” Rudolph recently recalled. “I’ve always been a fan of Jason Witten. I knew he wore 82, and I felt like 82 was a little bit more of an athletic tight end number as opposed to 86. I went with the lower of the two numbers, and the rest is history.”

Aside from equaling a number that Rudolph has worn well, the streak is significant and highly appreciated for multiple reasons.

An uncontrollable play occurred at Dallas in 2013. Rudolph ended the play with a touchdown and a broken foot after Cowboys safety Barry Church missed a tackle and landed on Rudolph’s foot.

Secondly, Rudolph credits his comprehensive plan of taking care of his body.

“I was banged up early in my career, kind of late in college and early in the NFL, battling some soft tissue injuries, thinking I was doing all of the right things to stay on the field, and I wasn’t,” Rudolph said. “I kind of changed the way I trained, changed the way I take care of my body. I’ve gotten myself into a routine in the offseason, but also from Monday to Saturday to be able to go and play every week.

“Thirdly, you have to be tough. You’re never going to play 82 games completely healthy,” Rudolph added. “You have to play through some things. It’s just the nature of our game.”

After missing seven games in 2014 while recovering from surgery on his hips, Rudolph worked his way back into the lineup. Unfortunately, he got caught in a pile at Detroit in December and missed Minnesota’s game at Miami in Week 16. The following week, the best the Vikings could aim for was a 7-9 mark with a win over Chicago.

“They didn’t shut me down and put me on IR, so I wanted to do everything I could to make sure I was ready to play on Sunday,” Rudolph said. “I remember trying to battle that week and getting ready to go. It was a big win for us to end the year on a high note and go into the offseason with some momentum.”

Minnesota prevailed that day, building momentum for an 11-5 mark in 2015 and NFC North crown in Head Coach Mike Zimmer’s second season at the helm.

Much harder to foresee was the fact that Rudolph, who missed 15 games from 2013-14, was beginning a streak that continued for the next five seasons and 81 consecutive regular-season starts. It is the longest current continuous chain by an NFL tight end. Kansas City’s Travis Kelce is entering 2020 ranked second (32 consecutive games), followed by Cincinnati’s C.J. Uzomah (29).

Rudolph’s run has exceeded Steve Jordan’s mark of 52 by a Vikings tight end (Jordan missed one game in 1989 between streaks of 52 and 51 games), and the 10-year pro has tied linebacker Roy Winston for the 24th-longest consecutive starts streak by a Vikings player at any position.

The most substantial threat to Rudolph’s streak occurred in Week 14 of the 2017 season at Carolina. He suffered a high-ankle sprain and began the next week in a walking boot.

Listed as “doubtful” to play against his hometown Cincinnati Bengals on the Friday injury report, Rudolph showed up at Winter Park the following day to run for Vikings Vice President of Sports Medicine Eric Sugarman and former coaches Pat Shurmur and Clancy Barone.

“I remember being in the training room at Winter Park [on Friday] and just begging ‘Sugs’ because we still had 48 hours before the game, and I hadn’t done anything to that point to prove to them that I was going to be able to play,” Rudolph recalled. “I just knew I still had 48 hours to try to get myself ready to play. … We had to win those last three games to potentially have home-field advantage throughout the playoffs. It was a big stretch for us, and I thought that it was important that I was out on the field each week.”

Rudolph displayed determination and his nose for the end zone, lobbying to go in for a particular play on the goal line that resulted in a 1-yard touchdown catch. He followed by hobbling his way through the “Ickey Shuffle” in homage to the former Bengals running back.