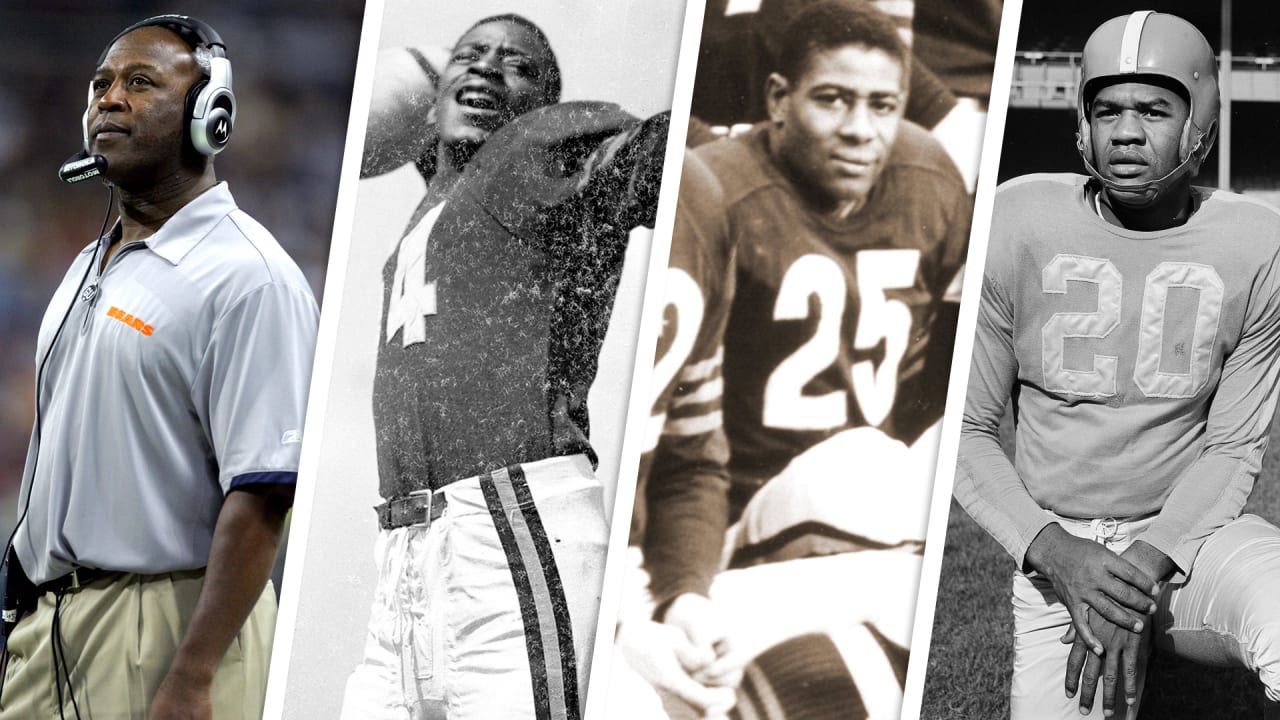 Coincidentally, Smith began his NFL coaching career on Dungy’s staff with the Tampa Bay Buccaneers as linebackers coach from 1996-2000. Smith then spent three seasons as St. Louis Rams defensive coordinator from 2001-03 before becoming the first Black head coach in Bears history in 2004.

Willie Thrower had the perfect name to play quarterback, but that’s not why it’s inscribed in NFL history books.

As a member of the Bears, Thrower became the first Black quarterback in NFL history on Oct. 18, 1953 when he replaced an ineffective George Blanda in a loss to the San Francisco 49ers at Wrigley Field, completing 3 of 8 passes for 27 yards.

Thrower played in only one more game for the Bears in 1953 before being released. But even though his stint was short, it certainly was impactful. Thrower was a pioneer, helping to pave a path that many others followed. Warren Moon mentioned Thrower in his Hall of Fame acceptance speech, thanking him for providing inspiration.

Thrower was born March 22, 1930 in New Kensington, Pa., just outside Pittsburgh. A running back at Valley High School, he switched to quarterback at Michigan State and was part of the Spartans’ national championship team as a senior in 1952.

Although he was just 5-11 and 170 pounds, Thrower had huge hands and a monster arm. In college he was called upon during kickoff drills in practice to heave the ball downfield because he could throw the ball so far with accuracy.

Thrower died of a heart attack Feb. 20, 2002 at the age of 71. In 2006, a statue of Thrower was unveiled at his high school to celebrate his accomplishments.

While the statue helps convey his story, even many of the NFL’s most ardent fans are unfamiliar with the barrier that Thrower broke. In the Chicago Tribune’s story about the Bears-49ers game in 1953, writer George Strickland mentions that Thrower made his NFL debut but said nothing about him becoming the first African-American quarterback in NFL history.

A 2006 article in the “Valley News Dispatch” revealed how Thrower would get frustrated throughout his life with those who doubted his claim that he was the NFL’s first Black quarterback.

“Basically, this is not somebody who broke records, somebody who did not break a passing record or yards rushing in a game,” his son, Melvin, told the newspaper. “This is a person who broke a barrier—someone who broke down a color barrier. I think if he would have stayed in the NFL for a couple more years, he wouldn’t have been as overlooked. Everyone knows the Jackie Robinson story; nobody knows the Willie Thrower story.”

That distinction occurred in 1949 when the Bears chose Indiana halfback/quarterback George Taliaferro in the 13th round (129th overall). The Gary, Ind., native never played for the Bears, however, opting instead to join the Los Angeles Dons of the rival All-America Football Conference (AAFC).

Three years after Taliaferro was drafted, Eddie Macon became the first Black player in Bears history in 1952. A second-round pick from Pacific, Macon played two seasons in Chicago before he decided to rejoin his former college coach in the Canadian Football League.

In a 1990s interview, Macon recalled that most fans, teammates and opponents accepted him, with one exception.

“I had no problems with the fans,” Macon said. “The team that I really had problems with was the Detroit Lions. They beat me in the face, twisted my legs. When I got in a pile, I tried to come out of that pile because I knew what they were going to try to do.”

Macon also faced discrimination off the field. When the Bears played preseason games in the south, Black players were not welcome in the same hotels as their white teammates. As a result, he stayed with African-American families who lived in the area.

While Macon deplored the racism and didn’t appreciate being separated from his teammates, he enjoyed meeting the families he stayed with, saying: “They did everything to make me feel comfortable.”

Macon smiled when asked about the role he played in Bears history.

When the Bears traveled to Oakland to face the Raiders in 2011, Macon—who lived in the Bay Area—was invited to visit the team hotel, where he met Smith and a handful of players, including Devin Hester and Charles Tillman.

Macon passed away April 19, 2017 at the age of 90. But he—like Smith, Thrower and Taliaferro—will be forever chiseled into Bears history.

Tags: his thrower was