In between meetings, practices and walk-throughs, Cory Littleton dashes home for lunch breaks.

The Los Angeles Rams inside linebacker — the team’s leading tackler — lives five minutes from the team’s practice facility. That’s just close enough to sneak in a few extra minutes with his longtime girlfriend Blime Macias and their two young kids, Nailah and C.J., who will soon be waking up from their naps.

“I know where he’s going but I always kind of turn a blind eye,” Rams linebackers coach Joe Barry said, smiling. “I’m just like, ‘Make it back in time’ and he has for three years and I don’t even worry about it because he’s got so much pride he would never put himself in a situation to miss something or be late.”

Littleton has a reputation around the team for absorbing everything, while not saying much. Head nods a lot. Limited-word answers are the norm.

Littleton rarely talks about his accomplishments, which have grown aplenty since the Rams picked him up as an undrafted free agent out of the University of Washington in 2016. But ask the 25-year-old what motivated him four seasons ago just to make the 53-man roster, and he isn’t shy in offering an explanation.

“I had a baby on the way, so I thought a 53-man roster would help me take care of her a lot better,” Littleton said, referring to 2 1/2-year-old Nailah.

What has continued to motivate him to become a playmaking linebacker?

“I always said, I’m going to buy my baby girl a pony,” Littleton said, chuckling. “I’m going to make enough money for you to get a pony.”

The pony, Macias says, is more of a metaphor than anything. She doesn’t expect that Littleton will bring one home for the kids any time soon.

“He always wanted to be able to have the ability to do anything for them,” said Macias, noting that Littleton talks a lot at home, and knows all the words to the kids’ favorite cartoons, “Puppy Dog Pals,” “Mickey Mouse Clubhouse” and “Paw Patrol,” among others.

Littleton earned his stay with the Rams in 2016 as a special-teams standout and continued to do so a season later, when he blocked two punts — one that was returned for a touchdown. That season, he also earned playing time on defense and started four games, coming up with a signature interception in a Week 16 win over the Tennessee Titans to help the Rams clinch their first division title since 2003.

Last season, Littleton took over as a starter at inside linebacker and was selected to the Pro Bowl on special teams.

“He’s just a great football player that just has a knack for making plays, being around the ball at the right time,” McVay said. “Certain guys are like that — Cory’s been one of those players — and really, with every opportunity that he’s been given, he’s maximized it.”

Over the last three seasons, Littleton has intercepted six passes. Dating to last season, Littleton leads the Rams with 183 tackles, and has five interceptions, which ranks him among the top 11 defensive players in the league.

Through the Rams 4-3 start, Littleton has two interceptions, a forced fumble and two fumble recoveries. He intercepted a pass from Cam Newton in a season-opening victory over the Carolina Panthers and then intercepted Matt Ryan pass last week in a rout of the Atlanta Falcons.

“He’s having another sensational year,” Philips said. “I think he was overlooked last year. … He’s a guy that makes big plays and he makes a lot of plays. He’s in on most of the tackles.”

Littleton is playing this season on a second-round tender, and is scheduled to earn $3.1 million, a significant pay increase from his last three seasons combined, when he earned $2 million, with incentives.

But despite developing into a defensive standout, it remains uncertain if the Rams will re-sign him.

The Rams have not placed great value on the inside linebacker position recently, trading Alec Ogletree and releasing Mark Barron, who both carried oversized contracts. 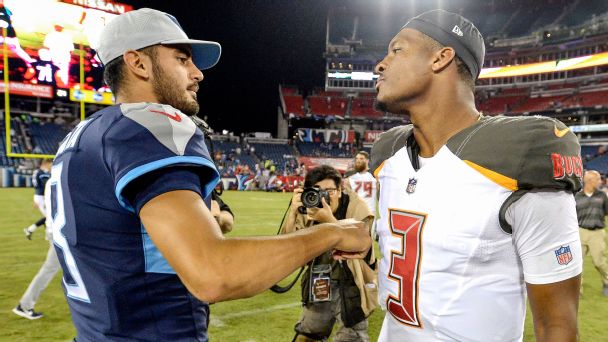 • Mariota-Winston at a crossroads
• Champion Chiefs still wondering
• What do the 49ers have in Jimmy G?
• Bisi Johnson filling big role for Vikings
• Never forget the Madden Curse

Littleton will not command record-breaking money, but there’s little doubt that he will be able to cash in.

“Watch his film,” Barry said. “His film doesn’t lie. He’s got a pretty remarkable résumé the past 2 1/2 years of making plays, routinely, week in and week out.”

Littleton knows change is on the horizon, whether that’s an increased bank account, a move or perhaps both.

“I would love to be here with the Rams. All these dudes in the locker room, it’s been home,” Littleton said. “But if I have to go somewhere else, then that’s what it is.”

In true Littleton form, he resorts to his quiet self and provides no words.

Instead, he outstretches his arms.