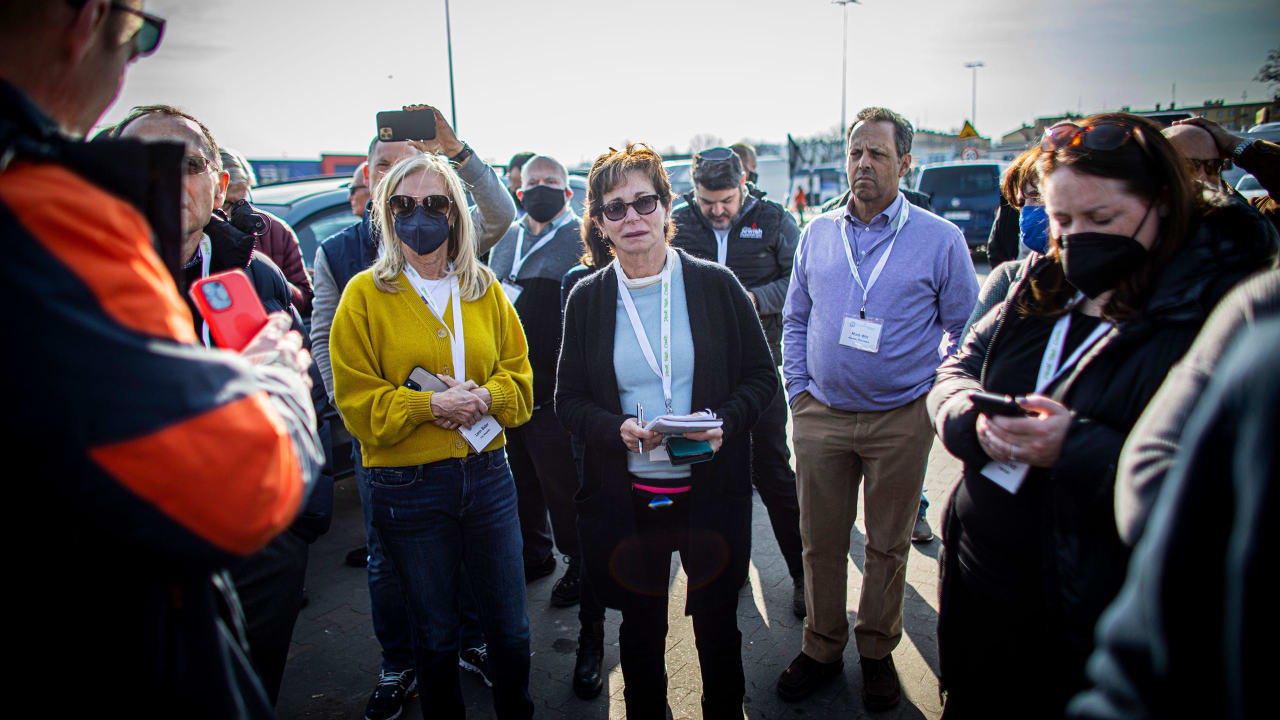 He noted an important stop in Medyka, Poland, a city that directly borders Ukraine. Wilf saw firsthand thousands of refugees, most of them women and children (men between the ages of 18 and 60 are not allowed to leave Ukraine).

“Coming across the border, you have all kinds of tents there right outside the border – to welcome them, to give them food and medical care, and to point them in the next direction,” Wilf said. “It was from every humanitarian organization you can imagine, including our partners we have on the ground there.”

The partner organizations to which Wilf referred include Jewish Agency for Israel, which in large part helps arrange travel and accommodations for those relocating to Israel; World ORT, which focuses on the young people and education; and the American Joint Distribution Center.

All three organizations are consistently at work in communities around the world, crisis or not. Organizations like the JDC provide an existing infrastructure to enable emergency support so quickly.

“We’ve been in these parts of the world for a long time, so we have hundreds of volunteers, professionals, experience in dealing with all kinds of trauma. It’s very hard to mobilize on a dime, in a quick way, and the fact that we have this experience allows us to respond,” Wilf explained. “We know it’s a small part of the overall effort, and we know the number of people we’re talking about [who are impacted] is in the millions, so we’re just trying to do our part where we can.”

The Jewish Federations of North America and humanitarian partners are currently working with refugees on the borders of countries surrounding Ukraine to make sure they have immediate needs – including but not limited to food, clothing, housing and mental health resources – tended to upon their departure.

“Seeing that was very humbling,” Wilf said of his time in Medyka. “Just to see the tremendous fatigue, exhaustion, and the trauma of it.

“These are families that have all of their possessions reduced to a shopping cart or a suitcase – and probably no home to go back to,” he added. “It’s very emotional and sad to see, and we have to do our part to respond.”

The crisis facing so many people because of the invasion hits especially close to home for Wilf, whose parents were both Holocaust survivors from Nazi-occupied Poland.

It isn’t lost on Wilf that the mission trip visited areas very near his parents’ hometowns.

“Eighty years ago, they didn’t have anyone to protect them, and they were basically refugees with no place to call home,” Wilf said. “That’s the trauma they experienced, and now we’re in a different seat where we have the privilege to give back and be part of the response to be able to effectively help those very countries where those things happened years ago.

“There was a lot of emotion on a personal level. This is a part of the world that has had that kind of history,” Wilf said. “Certainly from my personal standpoint, the Jewish community and Jewish people were helpless and hopeless in those days, with no one to look after them.

“Now to be part of the enormous response that’s going to be needed from the whole world … it’s quite a turn of history, and it’s a privilege to be able to help,” he continued. “No one wants to see other people suffer and see difficulties of this magnitude, and it’s our duty to respond if you can.”

Wilf encourages anyone who’s able to consider supporting Ukrainian refugees, whether through financial donations of any size, donation of essential goods or even through volunteering.

Most important, it’s imperative at times like this to come together as a society and lend a hand to those who need it.

“The reality is, this emergency – no matter where the political or military solution or progress comes – this is going to be a difficult crisis situation for some time to come,” Wilf said.

To learn more about Jewish Federations of North America and its efforts in Ukraine, or to donate, click here.