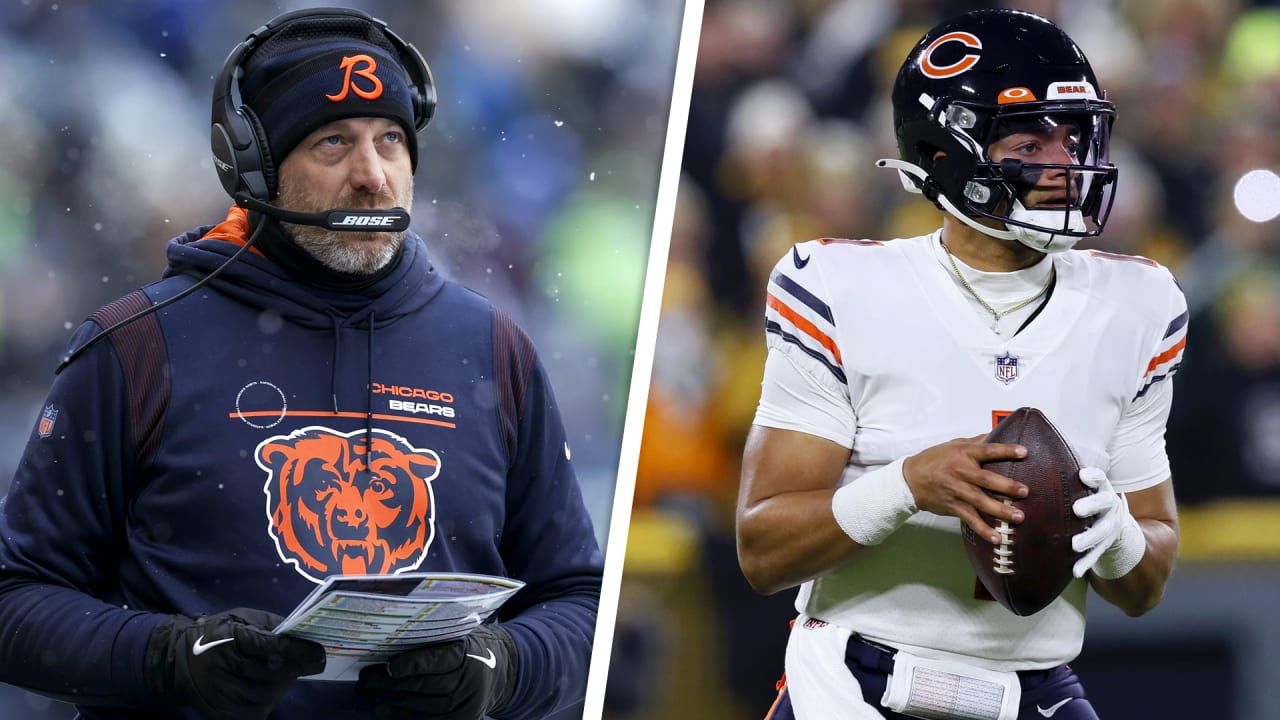 After compiling a 20-2 record in two seasons as a starter at Ohio State, Fields has lost seven straight games to fall to 2-8 as a rookie this year. Quarterbacking the Bears to a win over the Vikings would be a great way for Fields to cap a disappointing season.

“He’s put a lot of time and effort into this year, into developing and becoming a better quarterback,” Nagy said. “What this will enable him to do is finish on a high note and do everything he can to have a great week of practice mentally, physically, be there for his teammates, which I think says a lot for these guys.

“Justin’s a part of that. And even though physically he hasn’t been able to [play], he’s still a part of it with us as a team. To be able to come out here and hopefully get him healthy to where he can help us win a game, I think it would be great for him to do that. And again, that’s all we can ask for from him.”

(2) Nagy has been pleased with the growth he’s seen from Sean Desai in his first year as Bears defensive coordinator.

After spending eight seasons with the Bears—six as a defensive quality control assistant from 2013-18 and two as safeties coach in 2019-20—Desai was promoted last January to replace the retiring Chuck Pagano.

“The good thing with Sean is going into it, at the NFL level, he never experienced calling plays, and I thought right from the very beginning he’s done a great job of adjusting and adapting to the NFL game,” Nagy said. “The thing I like about Sean is he is extremely calm, and he does a great job of making sure that the guys feel that. There’s no panic. He’s super smart. He does a great job of scheming with those coaches and preparing. He’s evolved this year. It’s been neat to see.”

The Bears defense will enter the final weekend of the regular season ranked fifth in the NFL in total yards, allowing an average of 315.6 yards per game. In Sunday’s win over the Giants, the defense did not permit a touchdown for the first time this season; yielded a season-low three points, 151 total yards and minus-12 net passing yards; registered a safety and produced four takeaways and four sacks.

“You see it in a lot of games where the defense has come out and schematically done a great job,” Nagy said. “The guys play hard. [Desai’s] coaches are doing a great job with him. It’s really neat to see. I think when you have a young guy, first-time coordinator who continues to grow, that’s all you can really ask for.”

(3) Nagy believes that turnover ratio is one of the key factors that has kept the Bears from having a winning season since his first year in 2018.

“What’s the turnover ratio? Do you take the football away on defense? And do you respect the football on offense?” Nagy said. “You can have fun today and look at a good stat and check out the turnover margins in the NFL right now, and I’ll bet you there’s some playoff teams in the top 10. That matters.”

The research that Nagy suggested shows that seven of the league’s top eight teams in turnover ratio have either clinched playoff berths or can do so with a Week 18 win: the Packers (plus-16), Colts (plus-16), Cowboys (plus-13), Cardinals (plus-11), Patriots (plus-10), Bills (plus-8) and Buccaneers (plus-8). The only team with a turnover margin of at least plus-eight that has been eliminated from the playoffs is the Bears’ Week 18 opponent, the Vikings (plus-9).

“It’s contagious,” Nagy said. “[Sunday], you saw what happens. We end up getting some turnovers, some takeaways. You get sacks, you get a safety. Sometimes it goes that way. You look at the Cincinnati Bengals game at the beginning of the season, we had four takeaways. And then there’s some times you go through a drought. That’s normal. That happens.

“When you go through a drought on defense and you don’t get takeaways, offensively, you’ve got to respect the football and you’ve got to score touchdowns. When you can get those three phases to have complementary football in the turnover margin category, you’ll have a higher percentage chance of winning.”