The Broncos reside in the AFC West and that means they don’t get to think about winning the division until they can deal with Kansas City Chiefs‘ quarterback and annual-MVP candidate Patrick Mahomes.

At 25, Mahomes is THE franchise quarterback in the division, but he’s not the only one. The Los Angeles Chargers have Justin Herbert, who just won offensive rookie of the year after setting first-year records for passing yards (4,336), passing touchdowns (31) and completions (396) and he won’t turn 23 for another three weeks. The Las Vegas Raiders have Derek Carr and he just finished his third consecutive 4,000-yard passing season with a 67% completion rate.

Bottom line: When you live in the AFC West, you have to stop the pass, and that’s where Denver’s problems at cornerback get magnified. The Broncos have already released A.J. Bouye and have no cornerbacks under contract for 2021 who started at least 10 games last season and are not returning from injury.

So how do the Broncos fix their greatest need? Free agency? Good luck. The Cardinals’ Patrick Peterson and Rams’ Troy Hill lead the list of potential free agents, but there are currently just six cornerbacks scheduled to be unrestricted free agents who are under 30 years old and played in at least 15 games for at least 800 snaps last season — the Browns’ Terrance Mitchell, Washington’s Ronald Darby and the Chargers’ Michael Davis among them. Most of the rest are in the buyer-beware zone — well over 30 or coming off injuries or bit players in their defenses.

Of the under-30 set who didn’t quite meet the 15-game, 800-snap marks, the Titans’ Desmond King, the Steelers’ Mike Hilton and the Bengals’ William Jackson may be among the best available.

The good news is that the draft can provide answers. ESPN’s Mel Kiper Jr. sees a fairly deep group of cornerbacks with talent at the top that could fall to the Broncos.

“I have 31 corners with grades inside the first five or six rounds,” Kiper said. “… It’s just a matter of what you like and where you fit some of the guys who were [COVID-19] opt-outs.”

So, riding shotgun with Mel, here’s how the cornerback board has started to stack as pro days approach:

Kiper says: “The Broncos are at [No.] 9, I just don’t know how far you want to go up for a corner. Caleb Farley would be a pick worthy of 9 if he would have played this year. He opted out, great year in 2019 … great speed, great length, great cover guy. This would have been a year, had he played, if he could have shown he tackled better and showed people that, he would have been really, really highly regarded. But he’s that top guy. Patrick Surtain is so technically sound, but maybe not as gifted as Farley. I think those two are are the corners in that top 15 area.”

The way I see it: Surtain is more well-rounded in terms of technique and is a sure wrap-up tackler when asked to participate in the run game — a no-exceptions rule for cornerbacks in Vic Fangio’s defense. Farley intrigues people because he is the potential over production prospect. He was one of the first high-profile players to opt out for the season and is a former quarterback and wide receiver with just two collegiate seasons at defensive back. Horn — at least before the pro days happen — Robinson and Joseph have been risers through the 2020 season. Kiper has Robinson as his No. 8 cornerback, but some teams are ready to take a long look at him at the bottom of Round 1, at least before all of the workout results are in. Joseph played one season at LSU and one season at Kentucky. He has showed top-tier instincts and a toughness in run defense. Horn has size and battles for the ball, but has drawn flags at times and that may cause some defensive backs coaches to pause.

What Kiper says: “After that first group there are some players I like, Greg Newsome out of the Northwestern, Keith Taylor from Washington. Taylor had a good Senior Bowl week, maybe he’s now a [second-rounder]. But I think some of the boards will reflect what teams think of the opt-out guys — if some teams are stricter in those evaluations than others — count them more — you could find some real so-called bargains down the board. I haven’t been as critical as some NFL teams I’ve talked to, but it will have an impact on some of the evaluations.” 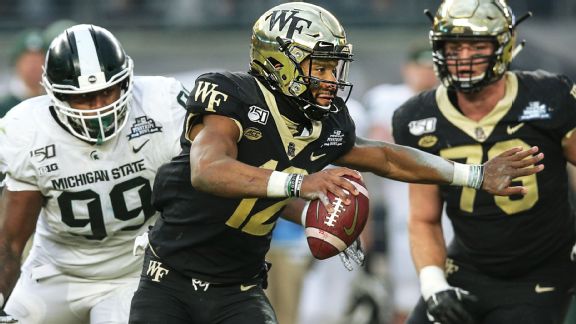 • The case for the Steelers drafting a QB
• Bucs’ free-agency priority: re-sign their own
• Broncos can address CB need in draft
• Could the 2021 NFL offseason match 1999?

The way I see it: Some teams will pause on Samuel because of his size (5-foot-9 5/8, 184 pounds), but with most defenses in the league playing in nickel as their “base” defense, there is a place for him. Many teams see Molden, too, initially as a nickel corner. Opinions vary widely on Wade as some evaluators need convincing he will not give as much ground to receivers off the line of scrimmage as he did at times this past season. Newsome will be a name to watch given his ability to line up on the perimeter immediately, but he didn’t play more than nine games in any of his three seasons with the Wildcats.

What Kiper says: “You look down into Day 2 and Day 3 [of the draft], you can get a Benjamin St-Juste out of Minnesota, really tall, really long. Thomas, from Michigan could be a third-rounder. … Paulson Adebo from Stanford, was an opt-out and kind of an enigma. Tre Brown, outstanding cover man, sticks his nose in there, he’ll tackle, breaks on the ball well.”

The way I see it: Look for tacklers with recognition skills in coverage for Fangio — it’s why Essang Bassey made the roster as an undrafted rookie at cornerback this past season. That’s also why a player such as Melifonwu is one to keep an eye on. Take a look at the video from the Senior Bowl practices and you see a physical player who got better and better as the week wore on and even showed enough toughness to cover tight ends when needed.