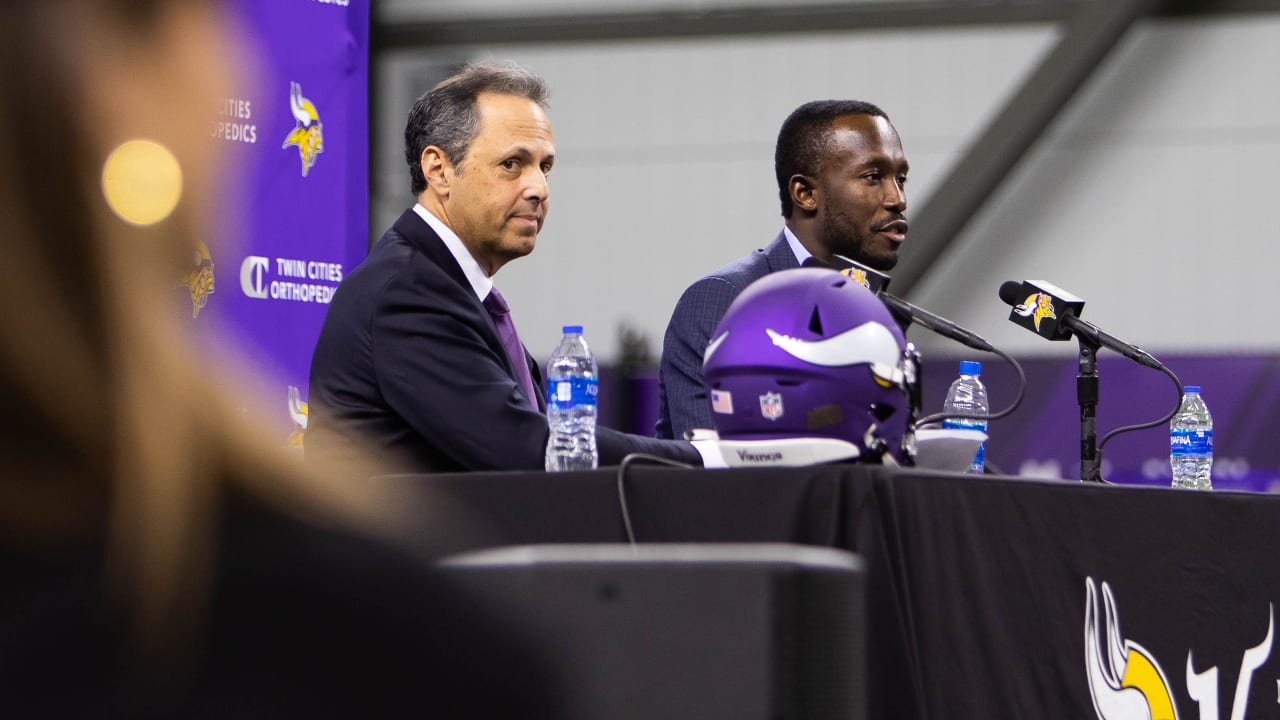 Get to know new Vikings General Manager Kwesi Adofo-Mensah from the beginning of his journey to Minnesota, starting with his first virtual interview. The episode provides an inside peek at Adofo-Mensah’s initial video interview with Vikings Owners Mark and Zygi Wilf, Chief Operating Officer Andrew Miller, Vikings Co-Directors of Player Personnel Ryan Monnens and Jamaal Stephenson, and others.

He connected with the Wilfs over a shared upbringing in New Jersey and East Coast familiarity, flashing an authentic, comfortable smile that well-complements Vikings Purple.

“I could talk about Jersey all day,” Adofo-Mensah said during the Jan. 17 call.

And if you’re curious about Adofo-Mensah’s snack of choice when in Philadelphia? He’ll take the Philly soft pretzel over a cheesesteak most days.

The interviews, of course, asked more hard-hitting questions that helped Adofo-Mensah stand out among a pool of candidates and led to his ultimate hiring on Jan. 26.

“I think the main things were leadership, dynamic energy, collaboration – and an ability to, honestly, elevate the people we have in the building,” Stephenson said of the impression Adofo-Mensah made on his new colleagues.

Produced by Vikings Entertainment Network, “Introducing” also takes you through Adofo-Mensah’s first all-staff meeting at Twin Cities Orthopedics Performance Center, during which he’s introduced to the organization and explains his philosophy and goals.

“I was in that exact seat not that long ago,” he told Vikings staff members. “All I did was work hard, listen, push myself. Honestly, be a good person. Because you find out during these interview processes, you’re interviewing every day of your life.”

Adofo-Mensah believes that things in life happen as they’re meant to be, and his calm demeanor reflects that mentality.

“If you just put passion and good energy out into the world, things kind of end up in a good place,” he said.

Minnesota feels like that good place for Adofo-Mensah, who is helping kick off a new era of Vikings football.

And for him, it all feels sort of full circle.

Adofo-Mensah shared upon his hire his affinity for Vikings Legend Randall Cunningham, “The Ultimate Weapon.”

“I always kind of saw in Randall something that I saw in myself – this person who’s striving against convention and doing this great thing,” Adofo-Mensah said. “I just connected with him in a lot of different ways.”

To now be stepping into a general manager role for the team Cunningham once quarterbacked? It’s a special – and sometimes surreal – scenario for Adofo-Mensah.

Follow along as Adofo-Mensah returns from the NFL Scouting Combine to find a custom painting of Cunningham leading Minnesota against Chicago, created by Vikings Senior Graphic Designer Taylar Sievert.

“Finishing touches,” a smiling Adofo-Mensah said of the addition to his office wall. “Now we’ve gotta get to work and get this free agency and draft ready.”