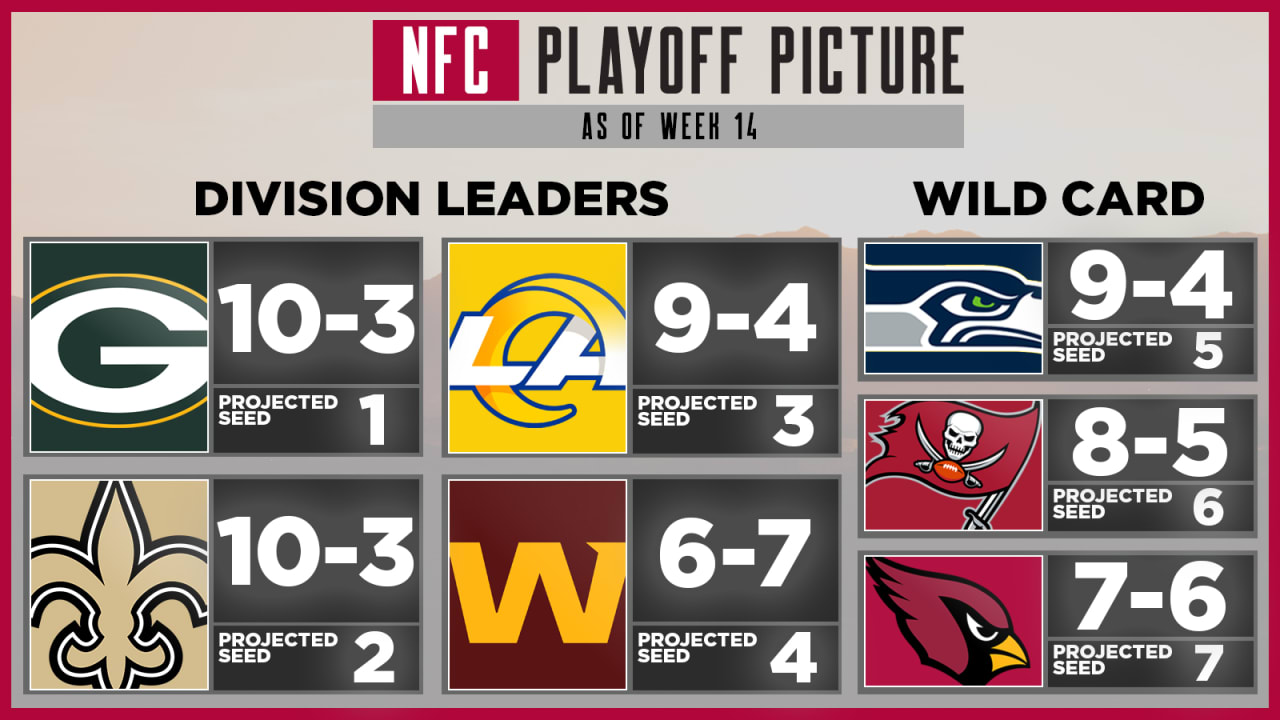 The Cardinals knocked off the Giants on Sunday to reclaim the final NFC wild card spot with three games remaining. The Vikings fell a game behind with a loss to the Buccaneers, while the Bears are also a game back after defeating the Texans.

Here is a look at the NFC playoff picture heading into Week 15:

1. Green Bay Packers (10-3): Green Bay beat the Lions on Sunday to pass the Saints for the top seed in the conference. The Packers own the tiebreaker after beating New Orleans head-to-head earlier this season.

2. New Orleans Saints (10-3): The Saints were shocked by the Eagles, who got a boost from rookie quarterback Jalen Hurts in his first career start. The loss snapped New Orleans’ nine-game winning streak.

3. Los Angeles Rams (9-4): The Rams are coming on strong as they dismantled the Patriots on “Thursday Night Football.” Los Angeles stays ahead of Seattle in the NFC West standings by virtue of the head-to-head tiebreaker.

4. Washington Football Team (6-7): Washington has won four consecutive games to take over the top spot in the NFC East. It knocked off the 49ers on Sunday to surpass the Giants in the standings.

5. Seattle Seahawks (9-4): The Seahawks got back on track with a blowout of the Jets on Sunday. They face Washington, the Rams and the 49ers down the stretch.

6. Tampa Bay Buccaneers (8-5): The Buccaneers beat the Vikings on Sunday to keep their spot in the playoffs. Tampa Bay travels to face the Falcons in Week 15.

7. Arizona Cardinals (7-6): The Cardinals routed the Giants to return to the No. 7 spot after a one-week absence. They host the Eagles in Week 15.

What’s on the line for the Cardinals in Week 15: The Cardinals have a winnable game at home against the Eagles on Sunday, and taking care of business would keep them in a wild card spot. The Vikings and Bears play each other this week, so one of those teams will stay hot on the Cardinals’ heels while the other will be dealt a loss. If the Cardinals lose to Philadelphia, they will fall behind the winner of the Vikings-Bears matchup via tiebreaker. If Tampa Bay loses to the Falcons, the Cardinals could jump up to the No. 6 seed in the NFC with a victory because they would hold the tiebreaker via a better conference record.