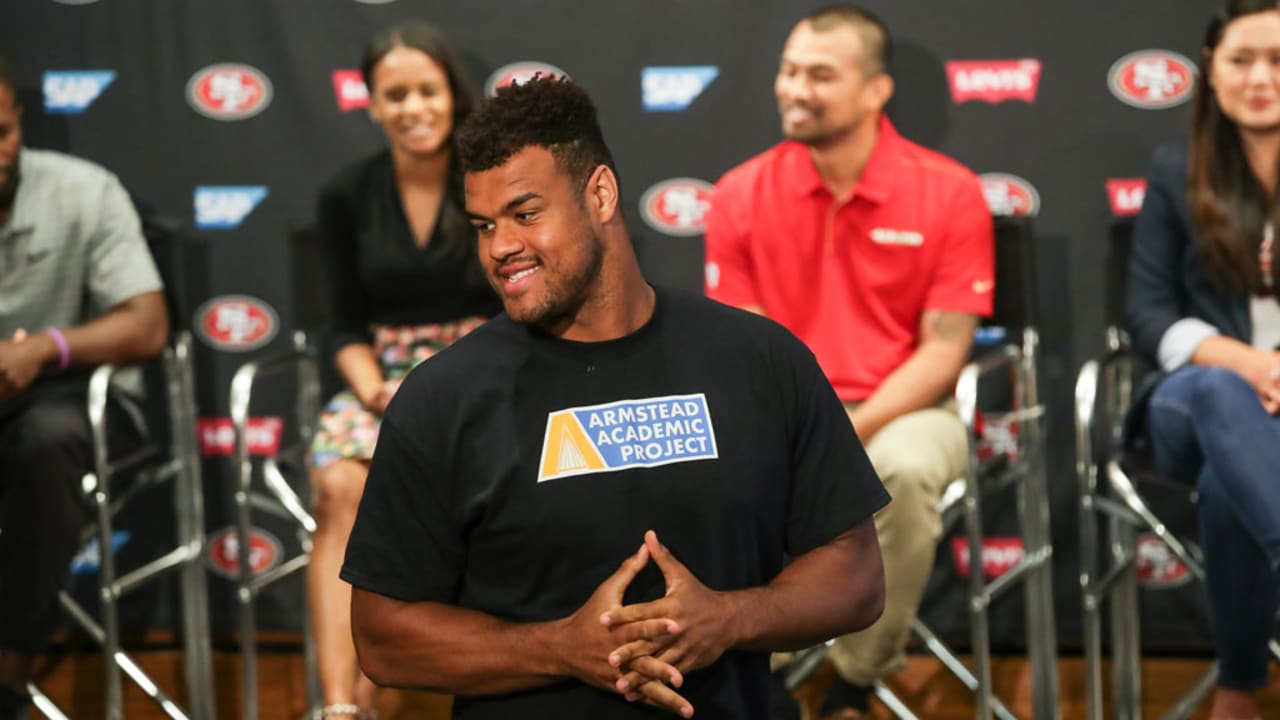 Congratulations are in order for ﻿Arik Armstead﻿. The 49ers defensive lineman was named the NFL Players Association Week 10 Community MVP, which recognizes players who have demonstrated a commitment to making a positive impact in their community. The weekly Community MVP winners will also become eligible for the NFLPA Alan Page Community Award, which is the highest honor that the NFLPA can bestow upon a player.​

Originally selected 17th overall in the 2015 NFL Draft, Armstead has become a cornerstone of the 49ers defensive line. But Armstead has made it clear he wants to make just as big of an impact in the community as he does on the field. A native of Sacramento, Calif., Armstead has made it his mission to serve the youth in his community by reducing barriers to opportunity. His foundation, the Armstead Academic Project, works to ensure that every student, no matter their socioeconomic status, has direct access to a quality education through a positive learning environment and resources needed in order to thrive and be successful. In just two years, the Armstead Academic Project has raised over $200,000 to support community programs, including nearly $30,000 through his Tackle for Students program last season.

After schools transitioned to virtual learning this spring due to the COVID-19 pandemic, Armstead launched his “Storytime with Arik Armstead” program to promote literacy and motivate students to read. Since May, Armstead has impacted over 440 youth from first to fourth grade, visited 21 virtual classrooms in more than 15 school districts from Sacramento to Doha, Qatar, and covered topics including equality, black history and sustainability. Seeing that the effects of the pandemic were only increasing the disparities in the education system, Armstead donated $50,000 and personally delivered 350 Chromebooks, one-year of pre-paid internet service and education kits to multi-student families through Sacramento’s Mercy Housing.

In addition to his work in education equity, this year, Armstead has begun a number of press conferences by discussing an issue that deserves an additional spotlight. So far, he has shed light on the topics of education inequality and the public-school system, funding for school districts of color, literacy rates, racism and implicit bias, homogenous corporate leadership and voting. Armstead enlisted the help of his teammates in an effort to continue these conversations by launching the Subject to Change video series. These roundtable discussions allowed players to discuss their personal experiences with racial disparity and actionable solutions to these problems in episodes “Race and Police Brutality in America” and “From Protest to Progress…Actionable Steps to Take in the Bay Area.”

49ers Announce Partnership with The Department of…