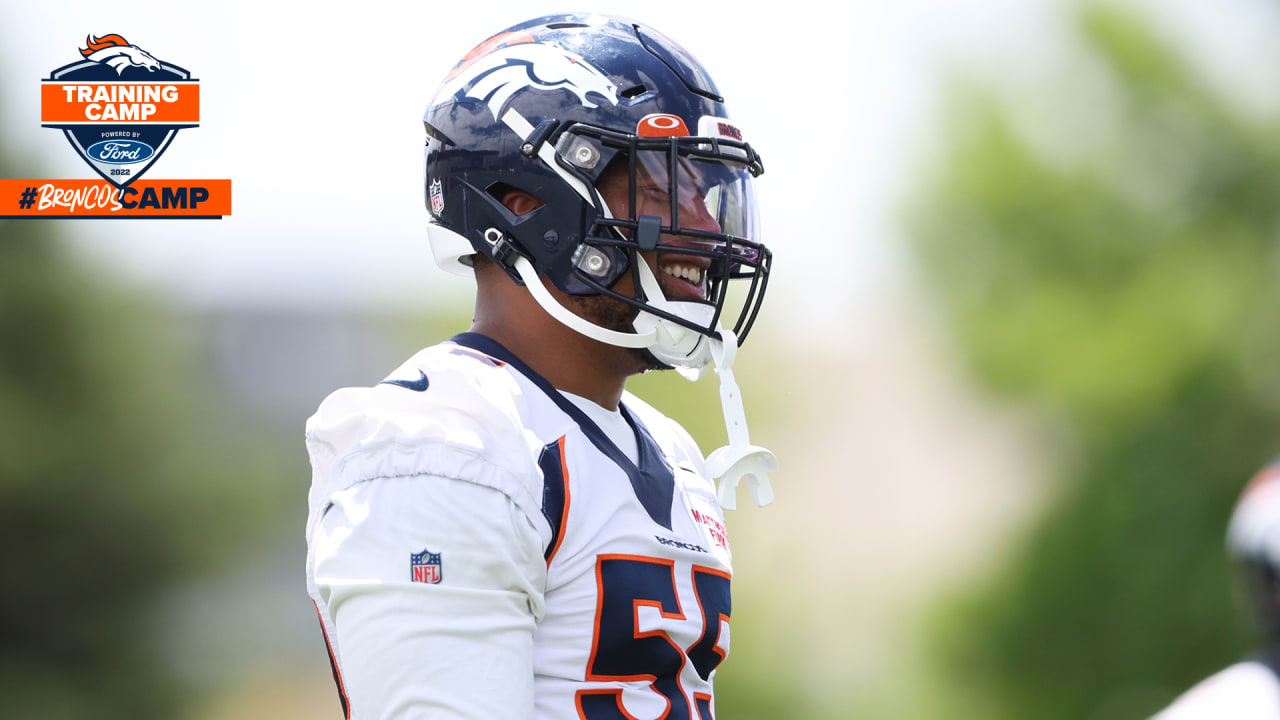 ENGLEWOOD, Colo. — If Bradley Chubb’s offseason is any indication, the 2020 Pro Bowler may soon return to his previous heights.

Ahead of training camp, both General Manager George Paton and Head Coach Nathaniel Hackett spoke highly of the 2018 fifth-overall pick and said his current play reminds them of his previous success.

“I’ve only been here a year and a half, but he’s had an incredible offseason,” Paton said Tuesday. “We’ve talked about it before. It’s the first offseason he hasn’t had to rehab and hasn’t had a surgery. We’re seeing the Bradley that I thought we were going to get when I got here. He’s playing with reckless abandon. He’s looked as good as the year when he had 12 sacks, as far as I’m concerned. We’ll see what happens when we get the pads on. We’re excited about Bradley Chubb. We want him here a long time.”

Hackett coached in Green Bay in 2019 when the Packers faced a healthy Chubb on the heels of his franchise rookie record-setting 12-sack season, and he doesn’t see a difference in play.

“It’s funny looking back to when we played Denver in 2019 and he was rolling,” Hackett said. “Since I’ve been here — I don’t know what’s happened [in the years since] — but it’s not fun to try and block him.”

Hackett said Chubb’s play has made it difficult on the offense, but he noted that the outside linebacker is “making us better.”

Chubb underwent an offseason ankle injury in 2021 and another one early in the season as he finished without a sack in seven games last year. Those surgeries came on the heels of tearing his ACL early in the 2019 season.

Chubb enters the 2022 season on the final year of his rookie contract, but Paton said the team would keep those conversations “in-house.” Paton spoke this spring about how he hopes that Chubb remains with the Broncos for years to come.

For now, the focus remains on Chubb’s play, which could become even more important as Randy Gregory starts training camp on the Physically Unable to Perform list.

If Gregory misses time during training camp, second-round rookie Nik Bonitto could be a beneficiary and receive extra snaps.

The 64th-overall pick earned second-team All-Big 12 honors in 2021 and posted 15 combined sacks over his final two seasons, and he could be an early impact player for Denver.

“Bonitto really finished strong,” Paton said. “He was hard to block towards the end of the offseason program. We talked about how he has incredible get off and incredible bend. He has a great pass-rush arsenal. He’s slippery and he played the run well.”

“Dulcich, obviously, had a little hamstring setback, but he showed in the short-term what he can do and what he can add,” Paton said. “He’s got tremendous speed, ball skills, great worker and highly intelligent.”

Both players could be critical to the Broncos’ hopes in 2022.

“We’re excited for both of them,” Paton said. “Where they contribute, we’ll see. We have a camp to see how it goes, but [I’m] really fired up for both of those players.”

Tags: chubb he his