FOXBOROUGH, Mass. — In some of quarterback Cam Newton‘s best years with the Carolina Panthers, the offense featured a power running game and bigger, physical receivers who were more likely to run over defenders than run past them.

The New England Patriots, with Newton leading the offense in 2020, could potentially be built in the same mold.

The hot-button question as Saturday’s roster cut-down deadline (4 p.m. ET ) looms — and coming off a 2019 season in which lack of speed at receiver was a notable Achilles’ heel — is if they want to be built similarly.

“Competition at that position has been good,” coach Bill Belichick said of the Patriots’ receiving corps. “As always, that’s the type of position where you can really see an individual highlight play, a spectacular catch, or a play that may not be as good, a dropped ball, and those plays are a lot more visible and really easily identifiable relative to an interior line play or that type of thing.

“It’s not just those highlight plays that everybody sees, but really the evaluation of the player’s consistency to win his route or block the player he’s supposed to block in the running game and so forth. There are a lot of things at that position that are subtle to the naked eye and it really comes down to that play-after-play consistency.”

When it comes to that, Belichick knows what he has in veteran Julian Edelman, who enters his 12th year with the team. Edelman is the top receiver — more shifty and feisty than a burner — and Belichick noted Wednesday that Edelman’s punt-return duties have been scaled back, which is “probably the right thing,” limiting his exposure to injury.

The Patriots are also fully invested in 2019 first-round pick N’Keal Harry, who has slimmed down in his second season and is moving better. But the 6-foot-4, 225-pound Harry is still less likely to blow past a defender, and more likely to deliver a crushing block or win a 50-50 competitive catch-type situation.

“N’Keal has worked really, really hard to get his body right and get his mind right,” receivers coach Mick Lombardi said. “Hopefully we can see it come out on the practice field and throughout the season.”

How the pieces come together at receiver around Edelman (who plays inside and outside) and Harry (purely outside) is one of the many compelling storylines surrounding the Patriots.

If the Patriots want to avoid a scenario similar to last season, when defenses didn’t need to consistently respect the deep part of the field because of a lack of speed, free-agent signing Damiere Byrd projects as a top candidate for the No. 3 role. 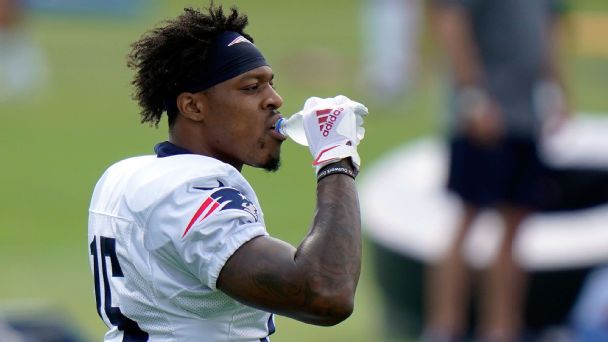 The 5-foot-9, 180-pound Byrd runs well, as evidenced over 14 training camp practices when he consistently found himself behind the coverage of cornerback J.C. Jackson and others. Byrd didn’t always come up with the deep ball, but the opportunities were certainly there.

Byrd, who is more of an outside receiver, also adds value as a punt returner. So he should be part of the overall mix.

That also helps explain Wednesday’s news in which the Patriots informed receiver Mohamed Sanu of their intention to release him. While some might have viewed it as a surprise — especially given the second-round pick the team traded to acquire him last October — things seemed to be trending in that direction in camp. A big part of it was his fit with the pieces ahead of him.

If the Patriots paired Sanu with Edelman and Harry, they would have likely been the slowest receiving trio in the NFL. So really, Sanu was a No. 4 option at best.

Sanu didn’t run as well as Byrd, didn’t have a role on special teams, was more of a pure inside receiver and was scheduled to earn a base salary of $6.5 million.

That combination threatened his place on the roster, and provides the strongest evidence that while the Patriots might see some value in duplicating the power approach of what the Panthers seemed to do best with Newton — relying on bigger, physical receivers — they’re also committed to finding more speed and dynamic playmakers.

Whether they have those options in-house is in question.

The issue with Olszewski, who is more limited to an outside receiver spot, has been drops. Same with practice-squad receiver Devin Ross, an inside-outside receiver who opened eyes early in training camp with well-run routes and build-up speed before tailing off a bit.

Olszewski and Ross might have been on Belichick’s mind Wednesday when he referenced consistency. Jakobi Meyers (valuable as an inside option) would be in that mix, too, as he’s been wearing a noncontact red jersey because of a shoulder ailment that had him on the sidelines for about a week in camp.

“I think we have a bunch of guys competing very hard. Working their tails off. Coach Lombardi is doing a great job getting us prepared,” Edelman said. “That’s what this part of the season is about, laying down your fundamentals, laying down your bricks for the beginning of this year, that are going to kind of carry you throughout the whole year.”

As for what receivers the Patriots carry into the season, removing Sanu from the roster was an initial step. There is intrigue with what comes next.