Quick-hit thoughts/notes around the New England Patriots and NFL:

1. Edelman’s preservation: Coach Bill Belichick’s acknowledgment that limiting Julian Edelman‘s work as a punt returner is “probably the right thing to do” highlights one of the Patriots’ challenges with one of their most important players.

How can they preserve Edelman, 34, to get him through the entire season?

He played 87% of the offensive snaps in 2019, totaled 100 receptions for 1,117 yards and six touchdowns, then had two surgeries in the offseason — one on his knee, the other on his shoulder.

It didn’t take long this training camp to see he was still managing the after-effects of an offseason of rehabilitation. Edelman was given a maintenance day on the second practice, then was in and out of practice thereafter. That’s been an adjustment for Edelman, who said, “This is my 12th year and it’s the first time I’ve really done this.”

Considering the Patriots have more questions than decisive answers at receiver, it sets up a potential troubling scenario: If Edelman can’t match last season’s 87% playing-time clip, or Father Time begins to slow him down, who else can they rely on?

2. Cam’s captaincy: Cam Newton being named a captain was unprecedented in Belichick’s 21 years as Patriots coach. Never before has a veteran signed with the team two months prior and elevated to that status so quickly. Junior Seau joined the Patriots in 2006 and had to wait until 2007 to be a captain. Ditto for Randy Moss, who arrived in 2007 and elevated to captain in 2008. The most recent comparable is tight end Alge Crumpler, who signed with the team in 2010 and didn’t make the initial captain’s list but was added during the season. And in 2003, safety Rodney Harrison had all offseason with the team, and the surprise cut of safety Lawyer Milloy right before the season, before he was named captain.

Matthew Berry and Stephania Bell discuss Cam Newton’s health and progress after he was named the Patriots’ starting QB.

3. Stidham’s slide: Newton’s ascendancy coincided with Jarrett Stidham slipping down the depth chart, to the point that if Newton suffered an injury, it might be veteran Brian Hoyer getting the call. Stidham can make all the throws, and might have the best natural arm of the group, but he never generated momentum in camp. His visit to a Boston hospital after the fourth practice of camp, where tests on his leg were negative, changed the trajectory of the quarterback snapshot. For 3-4 months this offseason, Stidham was viewed as the possible heir apparent to Tom Brady, but one could make a case there are actually more questions now about him possibly elevating to that spot than before camp began. 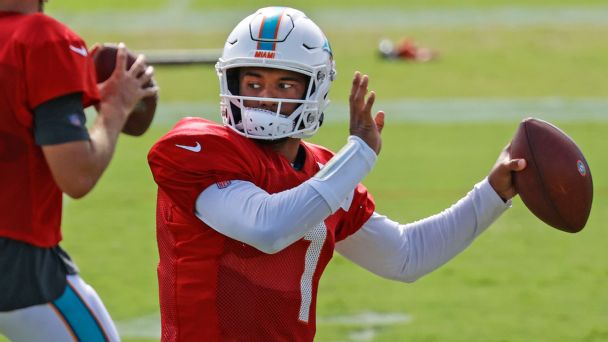 • How all 32 first-round picks have looked
• Chiefs’ Schwartz becoming cooking star
• How will Cowboys’ McCarthy use Zeke?
• What Adrian Peterson means to Lions
• ESPN+: Roster projections for 32 teams

4. Sanu follow-up: There is no sugarcoating the Patriots’ painful decision to trade a 2020 second-round pick (55th overall) to the Falcons last October for veteran receiver Mohamed Sanu. This one hurts. Sanu’s arrival provided hope for the 2019 season and a depleted receiving corps that seemed to get Brady down at times. So, in that sense, the aggressiveness can be applauded. But Sanu’s lack of quickness in camp, and his limitations as a pure inside receiver with no special teams value and a $6.5 million base salary, ultimately highlights a bigger issue for Belichick to consider: Why does it continue to be so challenging for the team to develop younger receivers to fill those voids? One potential silver lining is that after relying so much on route-running precision in a Brady-led attack, Newton’s ability to create plays might lessen that burden on receivers and possibly aid in their early-career growth.

5a. Rohrwasser decision: No team likes to whiff on any draft pick, and the Patriots might have done just that by selecting kicker Justin Rohrwasser in the fifth round, No. 159 overall. Unlike 2006, when the Patriots picked kicker Stephen Gostkowski in the fourth round (No. 118) and it was clear early on that he would win the job, it hasn’t been the same with Rohrwasser (who is likely to land on the practice squad if not claimed on waivers). The Patriots can easily be knocked for the pick after the team waived him on Saturday, but I’m less inclined to do so because it overstates the value of a fifth-round pick. Once you get to that point in the draft, there isn’t much difference (if at all) from fifth-, sixth- and seventh-rounders, and undrafted players. A case in point, on Friday the Tampa Bay Buccaneers waived kicker Matt Gay, who they selected in the fifth round last year.

5b. Why not Gostkowski?: One popular question was why the Patriots wouldn’t entertain bringing back Gostkowski. To me, that was more about Gostkowski than the Patriots, as he moved his family to Tennessee, and thus signing with the Titans was a better fit.

6. Motivated Eluemunor: When it comes to blunt, honest answers in training camp, it’s hard to top fourth-year Patriots offensive tackle Jermaine Eluemunor. Ironically, like Rohrwasser, he was selected 159th overall (in the 2017 draft by the Ravens) and didn’t meet initial expectations (hence his trade to New England). Eluemunor has been one of the notable stories of camp in seizing the right tackle job vacated when Marcus Cannon opted out of the season — whether it’s more about him or a lack of competition remains to be seen — but he isn’t accepting any congratulations because that’s what got him into trouble in the first place. “I feel like my first three years in NFL I was under the impression that I finally made it,” he said. “That’s one thing you can never do in the NFL is get comfortable, because things can change in the flip of a hand.”

7. Cam heats up late: Belichick’s Patriots teams have earned a reputation for getting better as the season progresses, and in that sense, Newton fits nicely as his quarterback. As the chart shows, Newton’s winning percentage has increased each month over the first 10 years of his career. According to ESPN’s Stats & Information, Newton’s 22-10 record in December is tied for fifth-best in the NFL since 2011 (minimum 15 starts).

8. Early-season injuries: One week away from the Patriots’ season opener against Miami (1 p.m. ET, CBS), one storyline that I’m not sure has gained enough attention is the importance of how coaches manage snaps at certain positions to limit injuries. With players not having a chance to play a preseason game to get acclimated to contact and game-type conditioning, it would hardly be shocking if the early-season injury rate is higher than the norm. Coaches are often thinking short-term, but those who favor a longer-term view might ultimately experience the greatest reward. This is especially true with players returning from offseason surgeries, such as running back Sony Michel (foot).

9. Popovich ties: Cole Popovich, now in his sixth season on the Patriots coaching staff and first helping to lead the offensive line after Dante Scarnecchia’s retirement, has often been asked if he is related to San Antonio Spurs coach Gregg Popovich. Up until about a year ago, his answer was no, but he recently discovered they are indeed related. Cole Popovich lost his dad at an early age, and after re-establishing connections with that side of the family over the past year or so, he learned of the connection (they’ve never met). As for Cole Popovich’s ties to Belichick, he played football at Fresno State under Pat Hill, Belichick’s old offensive line coach with the Cleveland Browns in the 1990s.