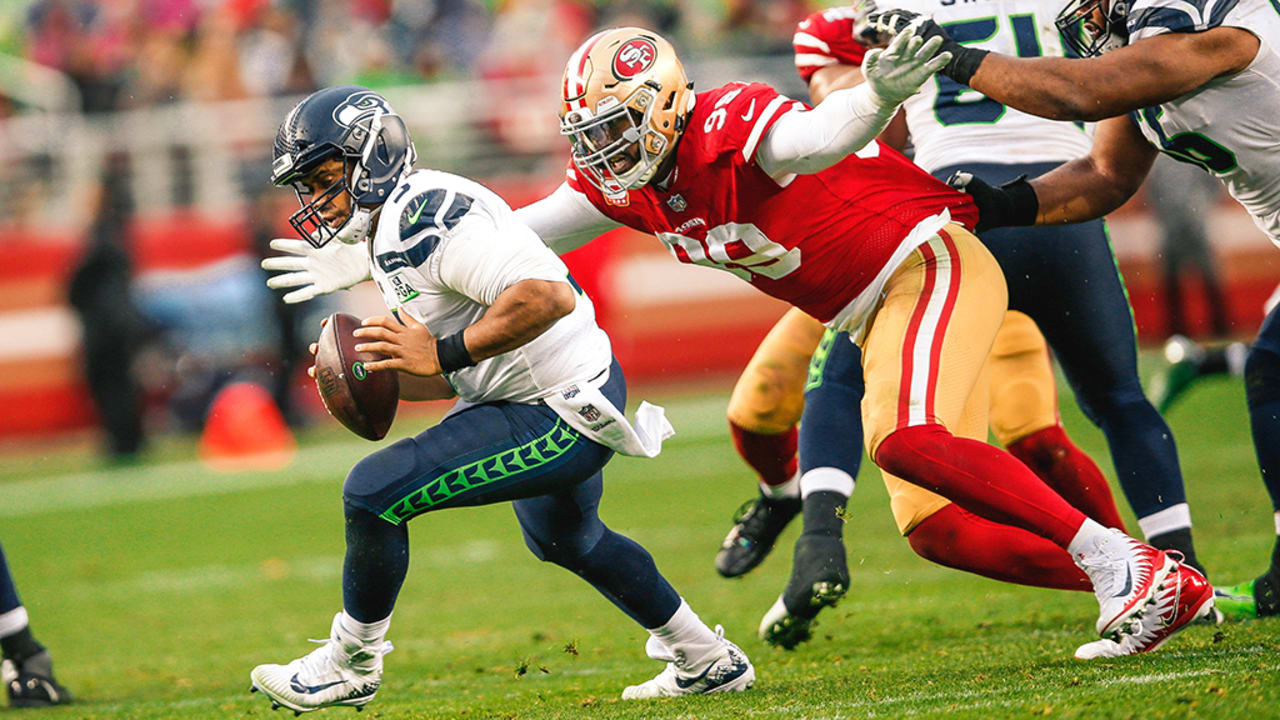 The undefeated San Francisco 49ers host the Seattle Seahawks for a top-tier primetime matchup on “Monday Night Football.” This Week 10 contest could potentially hold major positional implications in the NFC West division as both teams enter into the second half of the season.

This week, 49ers.com is joined by The Athletic’s David Lombardi. Lombardi has written for The Athletic since 2017. He covers a wide array of sports, specializing on the 49ers. He previously worked three years at ESPN, where he focused on college football. You can follow David on Twitter and Instagram.

1. Most important Seahawks player to contain?

My first answer would hands down be the same as David’s (see below). But a close second is Seattle’s lead running back. The Seahawks are averaging 131.7 rushing yards per game, seventh-best in the league. Meanwhile, Carson alone has put up 941 scrimmage yards and five touchdowns through nine games. Carson and Seattle’s strength in the run game is a “weakness” (and I use that term loosely) for San Francisco.

Three of the last four 49ers fmatchups have opened up with the opposition shoving the run down San Francisco’s throat. Opening drives by Los Angeles, Washington and Arizona were dominated by the run and each led to scoring opportunities. So yes, the 49ers top-ranked defense is human after all. I’m certain Seattle will follow the same approach and pound the rock on Monday against San Francisco’s 14th-ranked run defense, and all eyes will be on Fred Warner and rookie Dre Greenlaw, who is taking over for veteran linebacker Kwon Alexander, to stop the run.

Without question, quarterback Russell Wilson. The Seahawks aren’t quite a one-trick pony — Chris Carson can run the ball, and Seattle has a talented bunch of receivers — but this team only succeeds if Wilson succeeds. The defense simply isn’t good this year, and the offense needs Wilson’s frantic scrambling abilities to overcome its own deficiencies, namely an offensive line that hasn’t been great in terms of pass-blocking.

But Wilson is a magician, and the 49ers must contain him to the pocket as much as possible. If the 49ers can generally keep Wilson in the pocket and maintain the integrity of their defensive structure, they can keep the prolific pass rush coming. Entering this game, the 49ers adjusted sack rate of 12 percent is the highest since Football Outsiders started measuring the stat in 1996 (the 2000 Ravens finished at 11.9 percent). The 49ers defense must play the game on those terms. Their terms.

2. What is a key stat that may help dictate Monday’s win?

What a difference a year makes. Through eight games, San Francisco has recorded 16 takeaways on the season, tied with Seattle with the fourth-most in the league. A big turnaround from 2018’s league-low of seven. On the contrary, the 49ers have given the ball up 12 times compared to the Seahawks nine. It’s worth noting Chris Carson has struggled with ball security this season, fumbling five times, losing four. If San Francisco can hold on to the ball and force turnovers for Seattle, it will surely help build their momentum on Monday night.

We’ll keep this one simple: The Seahawks are allowing 25.6 points per game, which is exactly double what the 49ers are giving up (12.8 points per game). This is not the Seattle defense of yesteryear. This 2019 Seahawks defense is not good, and the advanced metrics go as far ranking them the No. 27 unit in the league. So in a game with so much focus on the battle between the Seahawks offense and the 49ers defense — a true top-3 matchup — perhaps it’s ironic that the other pairing may determine the outcome. The 49ers simply grade out much better offensively than Seattle does defensively, so that’s the margin that Kyle Shanahan’s team must capitalize on.

3. Position group that must perform well

I’m going to go back to David’s previous point. There’s a reason why Russell Wilson is having an MVP-caliber season: he’s tough to defend. Wilson has put up 22 touchdowns to just one interception for an NFL-best passer rating of 118.2. He’s decisive. He’s accurate. But also, he’s extremely mobile. Seattle’s quarterback can beat you with his arm… and his legs. Wilson is an expert at scrambling if he can’t find an open receiver.

That’s why it is up to San Francisco’s defensive line to stand by its mantra: to “wreak havoc.” Seattle has allowed 22 sacks through nine games. However, Wilson performs well under pressure and will be tested against the league’s top-ranked defense. It will be a huge day in San Francisco if DeForest Buckner and Co. can harass Wilson on Monday night and force the quarterback into rare, yet unfortunate situations.

We likely won’t be sure of George Kittle’s status until Monday. But even if he plays, that knee and that ankle may still be in at least a bit of pain. That puts a real onus on the 49ers wide receivers in this game. We know that Kittle is the centerpiece of this passing attack, and that the 49ers traded for Emmanuel Sanders to complement their big tight end. Well, Sanders and the rest of the 49ers wideouts may have to take matters into their own hands in case Kittle is out or limited on Monday. And even if Kittle is full-go, Shanahan’s offense counts on dynamic performance across the entire formation — in the pass-catching and blocking departments — for full efficiency. The 49ers may need that to best the Seahawks if Wilson has a big game.

While a lot of eyes will key in on San Francisco’s top-ranked defense against Seattle’s elite offense, it’s the 49ers imposing rushing attack that could be Monday’s game changer. San Francisco ranks second in the league with 171.1 rushing yards per game. Meanwhile, Seattle’s run defense sits in the middle of the NFL, giving up an average of 102.7 yards per game (13th-best). With Kittle’s availability in question, and the return of Kyle Juszczyk, it could make for a big day for another San Francisco weapon in the form of dual-threat running back, Tevin Coleman.

The 49ers will win this game by multiple scores, with 34-20 being my call. I see this being a statement game for a rested 49ers defense, which will be relieved to not play on a Thursday night. And Seattle’s defense simply isn’t good enough to keep up with Shanahan’s offense, so this won’t be as close as many are predicting it will be.