INGLEWOOD, Calif. — In the closing moments of Super Bowl LVI, Los Angeles Rams defensive tackle Aaron Donald burst off the line and darted past Cincinnati Bengals left guard Quinton Spain with no less than the Lombardi Trophy at stake.

This was the moment Donald had been dreaming of for most of his 30 years on the planet and, finally, he had his opportunity to reach out and grab the final piece of his football puzzle. Getting ahold of Burrow to force an errant incompletion and end the Bengals’ last, desperate drive meant the Rams and Donald were world champions.

That Donald, long regarded as the best defensive player in football, made the play was no surprise. The questions that followed and persist are: How long will Donald continue to conjure such dominance?

NBC’s Rodney Harrison broached the topic during the Super Bowl pregame show, noting that Donald told him: “There’s a strong possibility” he could retire if the Rams win the Super Bowl.

All signs have continued to point in the direction of Donald returning. General manager Les Snead told reporters this week a Donald retirement is “not a concern” at this moment. Clearly, it’s at least been on Donald’s mind but a lucrative contract extension would allay concerns of an imminent retirement.

“I’m just in the moment right now,” Donald said repeatedly after his championship-sealing hit on Burrow.

Whatever uncertainty Donald’s pre-Super Bowl words have sown, there’s one thing which should not be in doubt: he’s garnered the right to do whatever he wants on whatever timeline he chooses.

In the days and weeks since the Rams were crowned world champions, Donald has expressed a desire to return for at least a ninth season. However, that has often come with conditions surrounding the team’s ability to bring back pending free agents such as edge rusher Von Miller and receiver Odell Beckham Jr. so the Rams can “run it back.”

Undoubtedly, a Donald retirement this offseason would come as a surprise. Legends at the peak of their powers such as Barry Sanders and Calvin Johnson have retired around the same age as Donald but were stuck in football purgatory with the Detroit Lions, not coming off Super Bowl titles. Others, such as John Elway and Peyton Manning, have walked away after winning Lombardi trophies but weren’t in their football primes.

Were Donald to leave now he would, as he has many times in his career, fall into a unique category — a player departing at the top of his game on a championship team. It would be a lot to leave behind.

Still, is it not possible that Donald has poured himself so wholly into the game for so long that he’s accomplished everything a player in his position can achieve? That he, as a shoo-in first ballot Hall of Famer, is at least starting to wonder what might be on the other side for him and his growing family? After reaching the NFL mountaintop, it’s only natural he would begin pondering when to call it a career, whether that’s this year, next year or five years from now.

In eight NFL seasons, Donald has won the Defensive Rookie of the Year award, earned seven first team All-Pro honors (all in a row, making him the first NFL defender in history to accomplish that), eight Pro Bowl nods, three NFL Defensive Player of the Year trophies and was named to the NFL All-Decade team for the 2010s.

In league history, only Donald and Lawrence Taylor have ever been Defensive Rookie of the Year, NFL Defensive Player of the Year multiple times, named All-Pro five-plus times and won a Super Bowl.

Suffice to say, Donald is one of the best to ever do it.

“He’s done everything you could possibly do,” Miller said after the Super Bowl. 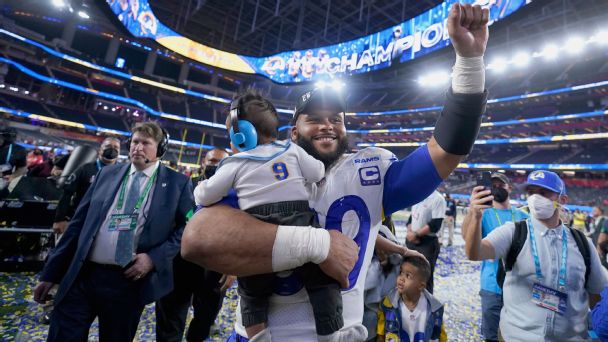 There has been speculation bringing up retirement could be a ploy to get that aforementioned pay raise. Donald is currently the NFL’s fifth-highest paid defensive player in terms of average annual value (around $22 million) and there are others in line to get deals that surpass him as soon as this offseason.

But the threat of retirement seems to be a silly method for Donald to gain leverage. After all, he’s already the best defensive player in football, one of the greatest of all time and just won a Super Bowl. Players of that caliber don’t (or shouldn’t) need to make retirement threats to be paid.

“I always set myself on high goals and standards, but I’ve surpassed anything I ever thought that I wanted to do,” Donald said after the Super Bowl. “I thought coming in I wanted to be an All-Pro and a Pro Bowler, but to sit here and say I had a lot of individual success, I would have never thought in a million years full circle that I would be sitting here right now with the success I’ve had in the short amount of time in this league.”

And if Donald does what many expect and returns under a reworked contract worth many millions more, it won’t be because of what he might have said about a retirement before the Super Bowl.

It will be for the same reason he’s gotten every dollar, accolade and championship from playing football: Because he earned it.