Then, Bateman showed why he was a first-round pick by hitting Humphrey with an impressive move and even more impressive trash talk. After catching the ball, Bateman ran out of bounds and tapped the Pro Bowl cornerback on the backside.

“I’ve got a little wiggle too,” Bateman told him.

Bateman’s don’t-back-down attitude in addition to his polish already has generated hope that he’ll become the first bona fide No. 1 receiver ever drafted by the Ravens, and it’s only been two months since Baltimore selected him No. 27 overall.

Throughout the spring, Bateman backed up the scouting report about being an exceptional route-runner with how smoothly and succinctly he maneuvered all over the field. No one got open more consistently for quarterback Lamar Jackson than Bateman. 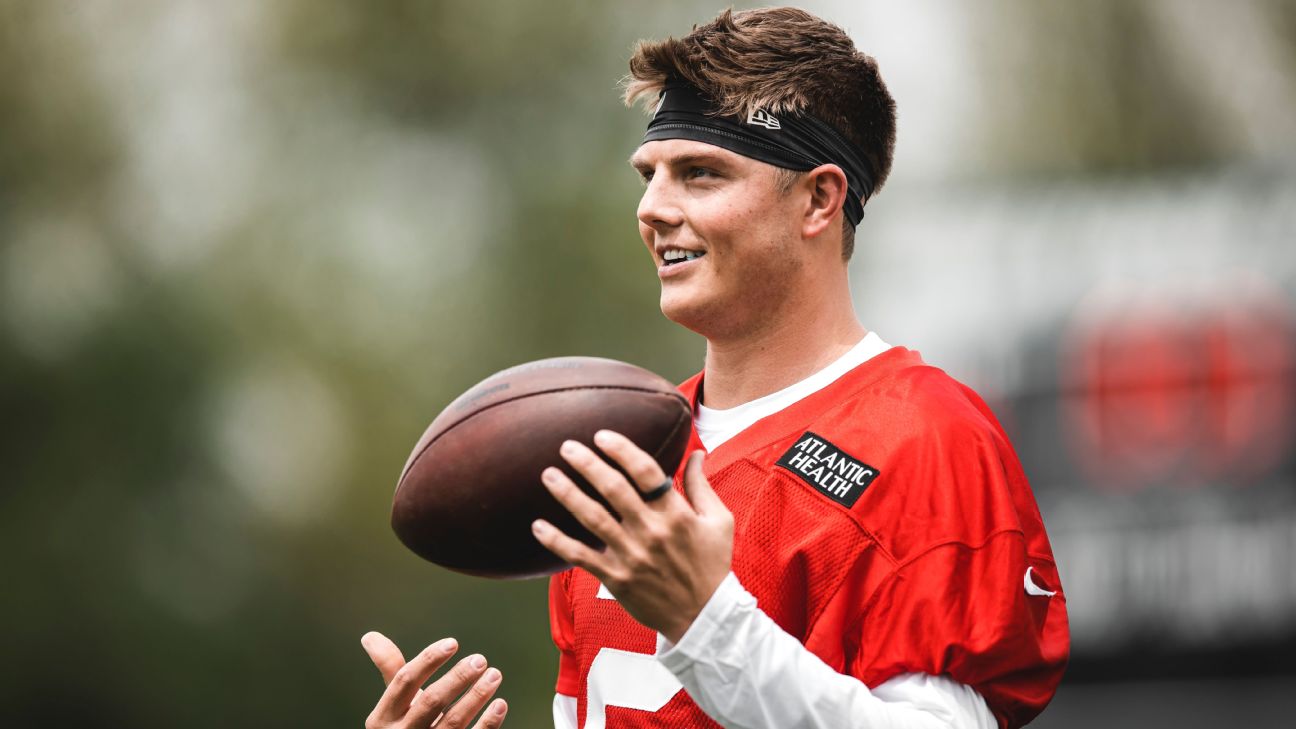 “To see that out of Bateman, it showed me the confidence he has,” Humphrey said. “After guarding him throughout OTAs and minicamp the other day, I’ve seen some serious flashes. I told [Ravens GM Eric] DeCosta: ‘Hey, man. I think we got a pretty good one in Bateman.’”

DeCosta has been obsessive in trying to end the Baltimore’s wide receiver drought. Since the Ravens’ inaugural 1996 season, Baltimore and the Washington Football Team are the only teams not to draft a Pro Bowl wide receiver, according to ESPN Stats & Information. The Ravens have also had just one 1,000-yard season by a drafted receiver over the last 25 years, which ranks as the fewest in the NFL.

In DeCosta’s three drafts as GM, the Ravens have taken six wide receivers, including two in the first round (Bateman and Marquise “Hollywood” Brown). DeCosta joked on the team’s podcast recently that he wants to be known as “the GM that finally gets a good receiver in the draft for the Ravens.”

What jumps off the tape with Bateman is how pro-ready he is. The Ravens have drafted faster receivers. They’ve drafted bigger. But it looks like Bateman comes to Baltimore with the most savvy.

He’ll use a stab move off the line to gain separation and create a clear throwing window for the quarterback. He’ll use a stutter-step to freeze the defensive back before running a fade. He’ll constantly help his quarterback by working his way back to the ball.

“He runs just about every route at a professional level,” Ravens wide receiver Sammy Watkins said. “I think he’s a very special wide receiver; he just has to put it together.”

In 2019, Bateman was considered one of the top wide receivers in college football after producing 1,219 yards receiving and averaging 20.3 yards per catch, the highest by a Big Ten player in 18 years. The summer before last season, Bateman was infected by COVID-19 and lost 10 pounds. He returned to play five games in 2020, when he put up respectable but less explosive numbers (13.1 yards per reception).

What you need to know about the Baltimore Ravens:

Though his stock may have dropped with other teams, the Ravens loved the nuances of Bateman’s game. He knows to bend his routes away from the safety help to get open and repeatedly takes the angle away from tacklers after the catch to gain extra yards.

“There are things he can clean up about his game, but what you love is the temperament and the work ethic that he’s showing right now,” said Joe Hortiz, the Ravens’ director of player personnel who attended Bateman’s pro day. “He is polished as an athlete and feel. But there’s still upside, physically – levels that he can take his game to. So, I think there’s still room for growth.”

Bateman is already ahead of the game compared to Baltimore’s previous two first-round wide receivers. In 2015, Breshad Perriman was raw and struggled to line up correctly. In 2019, Brown didn’t participate in any spring workouts as a rookie because he was still recovering from offseason foot surgery.

There were times when Bateman didn’t practice the past couple of months (muscle soreness and stomach virus). But, when he was on the field, Bateman practiced with such decisiveness that he appeared larger than his listed size (6-foot-1, 193 pounds).

Bateman should rank among the Ravens’ top three wide receivers this season, along with Brown and Watkins. If Bateman continues to progress in training camp and the preseason, it’ll be interesting to see where he ends up on Jackson’s list of favorite targets.