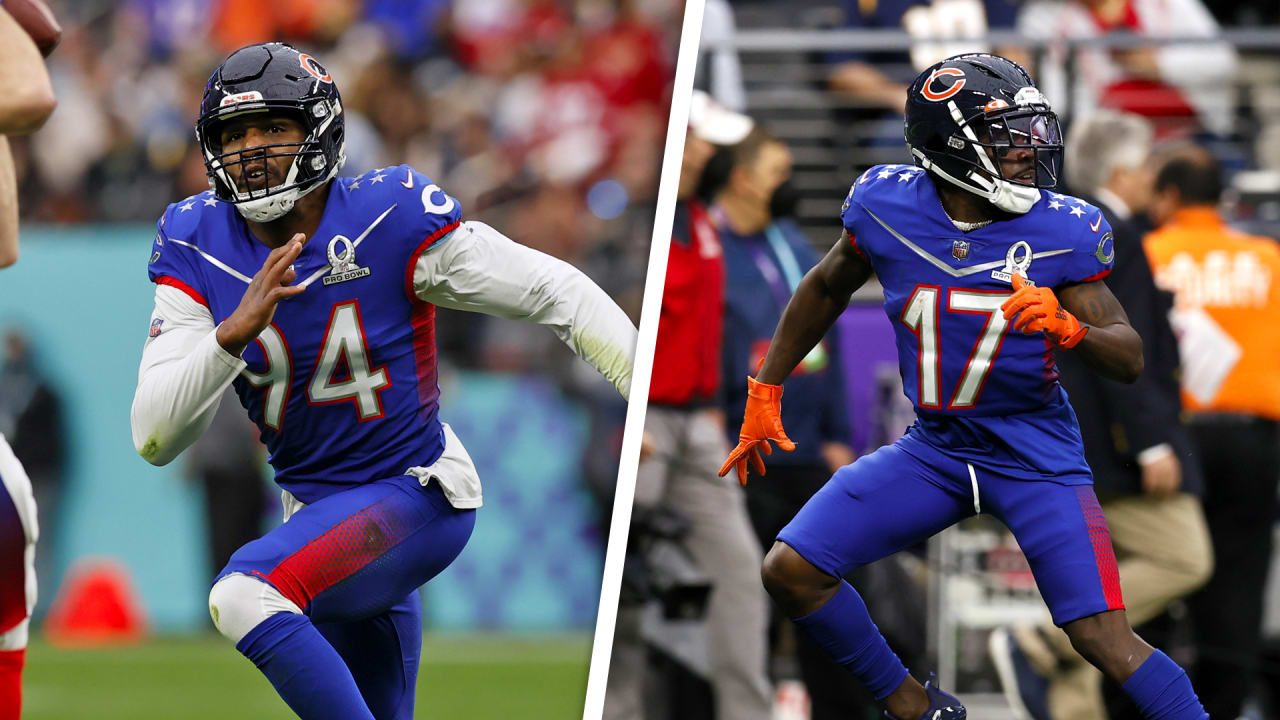 Quinn registered at least a half sack in 14 of 16 games played, including 12.0 in the final eight contests—a total that would have led the Bears in every season since 2007, except for 2018 when Khalil Mack amassed 12.5 sacks.

Quinn returned to the Pro Bowl this season for the first time since making back-to-back appearances in 2013-14 when he played for the St. Louis Rams. He estimated that about 20 relatives joined him this week for the festivities in Las Vegas.

“It’s my third [Pro Bowl], but No. 2 and 3 were far apart,” Quinn said, “so I’m trying to enjoy the moment for everything it brings and enjoy it the best I can with my family. Only a select few get to make it here, and when your family gets to enjoy it with you, it makes it all worthwhile.”

Grant was voted to the first Pro Bowl of his six-year NFL career. Obtained in an Oct. 5 trade with the Dolphins, he appeared in 11 games with the Bears. Grant ranked third in the NFL in punt returns with an 11.9-yard average with one touchdown on 26 returns and 11th in kickoff returns with a 23.4-yard average on 23 returns. He also contributed on offense, catching nine passes for 139 yards and two TDs.

“I honestly love it,” Grant said of his Pro Bowl experience. “It’s a complete honor. You’ve got stars who have been here seven years straight and just being able to be recognized with them speaks volumes and it shows that your hard work pays off.”

Grant was pleasantly surprised that so many Bears fans attended Pro Bowl practices.

“There are a lot of Bears fans,” he said. “They pop up out of nowhere and are like, ‘Jakeem, come over here, we’re Bears fans!’ No disrespect to the other fans, but when they’re calling my name, I go straight to the Bears fans.”

Grant enjoyed interacting and bonding with the other Pro Bowlers. He also liked reminding the Packers coaching staff—who coached the NFC squad—about his performance against them Dec. 12 in Green Bay. In a Sunday night contest at Lambeau Field, Grant scored touchdowns on a Bears-record 97-yard punt return and a 46-yard reception.

“With the Packers being the coaching staff, just talking trash to them about how they’re mad at me about what I did during the game, that’s also great,” Grant said.

In the actual Pro Bowl game itself Sunday at Allegiant Stadium, the AFC beat the NFC 41-35. Quinn recorded two tackles and one pass breakup, while Grant caught two passes for 15 yards and lost nine yards on a reverse. Kickoffs were eliminated as part of special Pro Bowl rules, and neither team punted in Sunday’s contest.