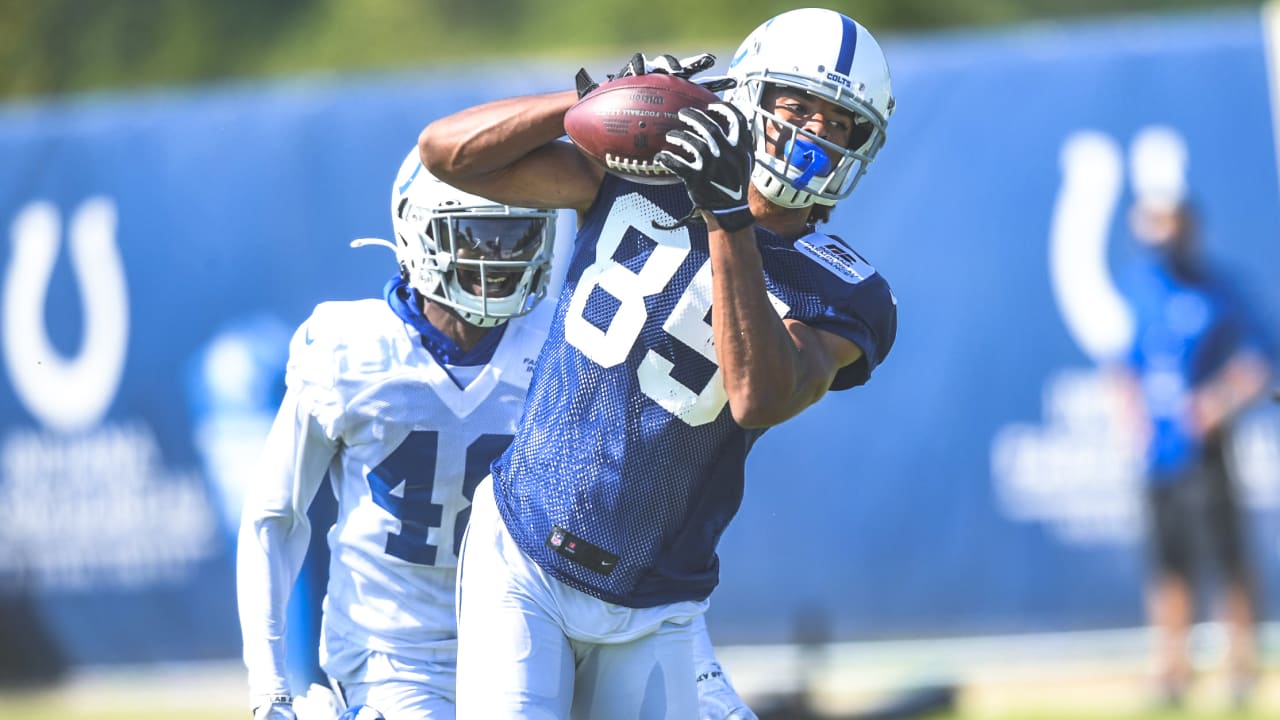 » After five straight practice sessions in full pads, the Colts today were in helmets and shells — a little bit lighter pace before Monday’s first of two practices being held this week at Lucas Oil Stadium (both of which are closed to the public – get details on live streaming the practice pre-show here). Head coach Frank Reich said he expects tomorrow’s practice to have some “aggressive thud” periods, which will feature a little bit more physicality than the team’s first few padded practices, but still no “live” periods, where there is actual tackling.

» Right tackle Braden Smith on Sunday participated in his first practice of camp after working his way back from a foot injury; Smith, who had a somewhat-limited role Sunday, did take part in some team drills. Also returning Sunday was running back Bruce Anderson III, who sat out Saturday’s practice.

» Center Joey Hunt and cornerback Andre Chachere, two free agent signings announced by the team just before Sunday’s practice, were out on the field for their first action in Indy. The team also announced it had placed tackle Andrew Donnal on injured reserve, and waived-injured tight end Ian Bunting.

» With Doyle, Burton and Grimble not participating, with Andrew Vollert, who was claimed off waivers by the team Friday and is on the exempt list until Monday, and with Bunting waived-injured just before the start of practice, the Colts had just two tight ends — Mo Alie-Cox and Farrod Green — available on Sunday. Alie-Cox and Green certainly got their fair share of reps in, both on offense and on special teams.

» Alie-Cox, in fact, had two especially notable plays on Sunday. On the very first play of 11-on-11 action, quarterback Philip Rivers perhaps led the big tight end just a little too much on a quick crossing route, but Alie-Cox was able to haul in the pass one-handed for about a five-yard gain on first down. Then, later on during a two-minute, move-the-ball drill, Alie-Cox had a diving catch along the sideline to help get the Rivers-led offense into field goal position with time running out.

» Defensive tackle DeForest Buckner was back working into the team drills during 11-on-11s Sunday. Buckner had sat out a couple days last week with a hand injury and returned Saturday, but in more of a limited role doing just individual/positional drills.

» Quarterback Jacoby Brissett had a few really nice throws on the day, including a big play to rookie wide receiver Michael Pittman Jr. down the right side, and then finding running back Nyheim Hines, who went untouched into the end zone, for a touchdown during a red zone drill. He also had a long touchdown pass to rookie wide receiver Dezmon Patmon on the final play of the day, which we’ll get back to a little later.

» Denico Autry and Tyquan Lewis are two of the Colts’ more versatile defensive linemen, but both had been pretty much anchored down at defensive end and defensive tackle, respectively, throughout the first week or so of camp. But both Autry and Lewis were seen moving all around the line on Sunday, giving defensive coordinator Matt Eberflus all sorts of options and packages at his disposal.

» Speaking of versatility up front, defensive end Ben Banogu showed off his athleticism out in open space when he was tasked with playing in coverage in the box on one particular play and knocking down a Chad Kelly pass attempt.

» Sunday’s practice ended with an aforementioned move-the-ball drill for both the first and second units. The offense started with the ball around their own 30-yard line and had about 1:30 to at least get into field goal range. The Rivers-led offense was able to do just that — get into field goal range — with the aforementioned pass play to Alie-Cox, as well as a chunk pass play to Green in the middle of the field, among other plays. With longsnapper Luke Rhodes as well as emergency snapper Trey Burton not participating in Sunday’s practice, however, the team did not attempt any last-second field goals.

» The second-team offense was able to get into the end zone on its move-the-ball drill thanks to a 40-yard touchdown pass from Brissett to the rookie Patmon, who ran by cornerback Travis Reed on the go route down the sideline and hauled in the well-placed, high-lofted pass from Brissett.