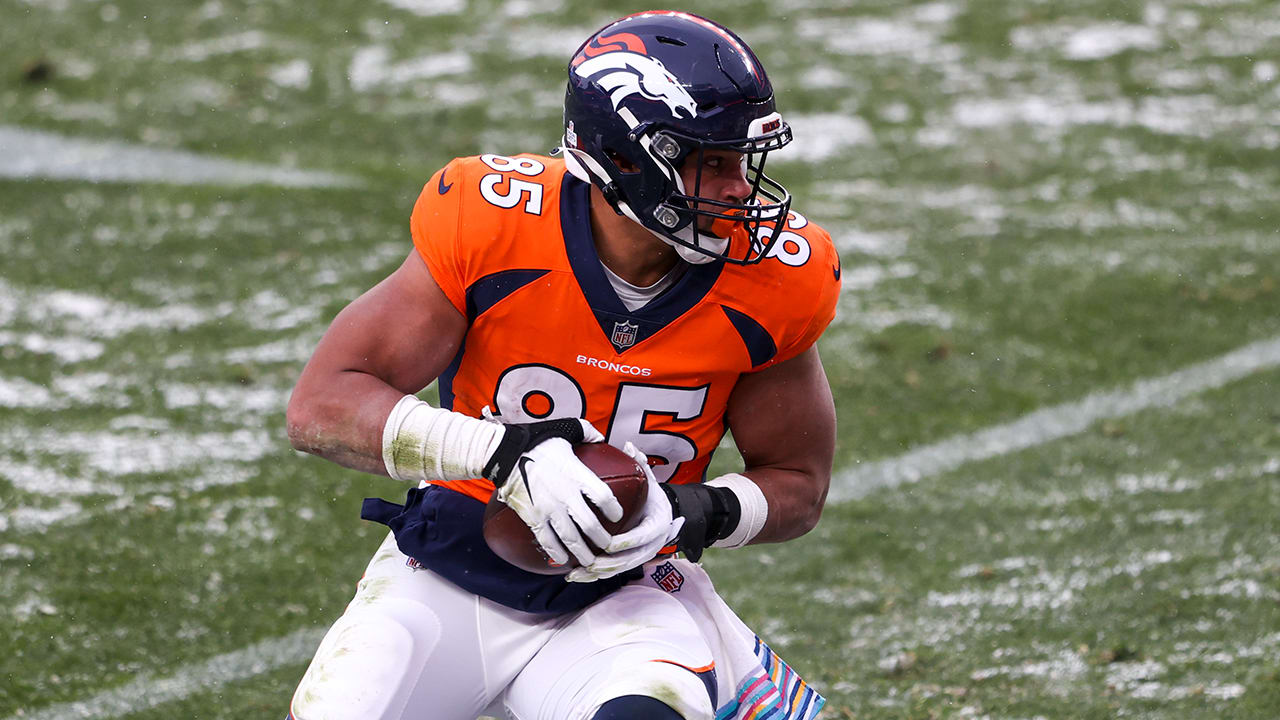 ENGLEWOOD, Colo. — Another talented Bronco has been lost for the year.

Rookie tight Albert Okwuegbunam suffered an ACL injury against the Falcons on Sunday and will miss the rest of the season, Head Coach Vic Fangio announced Monday.

“Albert did get an ACL injury and he will miss the rest of the season,” Fangio said. “The fortunate thing of it is it’s just the ACL and the ACL only. Many times when you get an ACL, it involves some other ligaments. His rehab and repair should go clean and he should be back as good as new next season.”

Okwuegbunam suffered the injury while making a 7-yard catch on a third-and-6 in the third quarter. He quickly grabbed his knee and was attended to by trainers. Okwuegbunam went back to the locker room and was ruled out of the game shortly after suffering the injury.

Okwuegbunam joins wide receiver Courtland Sutton, outside linebacker Von Miller, defensive lineman Jurrell Casey and nose tackle Mike Purcell among those who have suffered season-ending injuries. The Broncos have placed a slew of other players on IR with shorter-term injuries.

“It’s hard to pinpoint any one or two things as to why it’s happened,” Fangio said of the injuries. “Obviously you look at it thoroughly. Is it the training? The guys didn’t train here all offseason and we didn’t see them until training camp. Was that part of it? I don’t know. The shortened preseason? No preseason games? I don’t know. I think in each and every case, it’s something different. I don’t think you’re able to pinpoint one or two things right now.”

Okwuegbunam totaled 11 catches for 121 yards and a touchdown in his four games this season. Six of his catches went for first downs, and he played a pivotal role in the Broncos’ comeback against the Chargers. In the fourth quarter, Okwuegbunam caught a touchdown pass and drew a pair of pass-interference calls on the team’s final drive.

Noah Fant and Nick Vannett are the Broncos’ only tight ends who remain on the active roster. Fant suffered an ankle injury on Sunday, but he returned to the game. Fangio said he was optimistic that Fant and right tackle Demar Dotson would be able to play in Week 10 against the Raiders but that it’s “too early to tell.” Dotson (groin) did not return to the game after halftime.

The Broncos may also receive reinforcements from their Reserve/COVID-19 list, as Fangio believes both Shelby Harris and Graham Glasgow should return to practice on Wednesday.

“That’s the plan,” Fangio said of Glasgow. “He started training here yesterday, which is part of the protocol. They have to go through, I think it’s a three-day training acclimation period before they’re allowed to go back to the full football activities with the team. He started that yesterday, and I think we’re hopeful that Wednesday he’ll be back out there.”

Glasgow has missed the team’s last two games, while Harris was held out of the Broncos’ Week 9 loss to the Falcons.