Smiling ear to ear, Morris positioned himself 10 yards away from a line of defensive backs who cut across the field as their coordinator played the role of a human pitching machine, firing strikes in their direction so they could work on their hands.

Morris, a 19-year NFL coaching veteran who turns 45 next month, has experience coaching both sides of the ball and most recently served 11 games last season as the Atlanta Falcons interim head coach (Falcons went 4-7 under Morris after an 0-5 start).

“He never has bad days,” McVay said about Morris, who he worked with at two previous coaching stops in Tampa Bay and Washington. “He’s consistently pouring into these guys.”

Indeed, Morris admitted, his mood seems to trend happy. “It’s going to be hard to find me with a bad day,” he said.

That attitude has rubbed off on the Rams’ defensive players, with whom Morris has quickly ingratiated himself. “He motivates,” three-time NFL Defensive Player of the Year Aaron Donald said. “But at the same time make you laugh.”

Through more than three weeks of training camp, Morris has shown himself to be a hands-on coordinator who will take on any task, including working as an assistant to position coaches during individual drills, and he can also take a potentially mundane defensive meeting and turn it into something a bit more memorable.

“He’s a great coach, really knows how to connect to the players and he knows how to make humor out of situations when you mess up or something like that or you’re mad at yourself,” said defensive lineman Sebastian Joseph-Day, who has flashed throughout training camp as he prepares to start for a third season. “He finds ways to tell you that you messed up but make you laugh about it so you don’t beat yourself up about it.”

“His jokes are real funny,” said safety Jordan Fuller, who will take over as the defensive signal caller as a second-year pro. “Usually it’s him picking on somebody, but it’s fun, that’s what we do around the guys and all that so he’s fun to be around.”

As for any direct examples of Morris’ humor, his players won’t divulge the details.

“It might be censored,” joked outside linebacker Leonard Floyd, who had 10.5 sacks last season, when asked for an example of Morris’ jokes. “You know what I’m saying? I can’t really say it.”

All kidding aside, Morris inherits a unit that boasts Donald and All-Pro cornerback Jalen Ramsey, and includes several players who are coming off breakout seasons including Floyd and Williams.

It’s also a group that put up Super Bowl-caliber numbers despite a 10-6 finish and loss to the Green Bay Packers in a divisional playoff game. The Rams’ defense ranked first overall in efficiency, yards allowed per game (281.9) and points allowed per game (18.5).

Morris will keep the 3-4 scheme that Staley ran, but will add some of his own twists.

“He got his own flavor,” Ramsey said. “He may call plays a little bit differently than plays were called last year, but for the most part, we’re going to continue doing things that I’m sure he felt like we did well and change some of the things that we may not have done well.”

Morris may be challenged to keep the unit among the best in the league. Gone from last season is defensive lineman Michael Brockers, safety John Johnson III, cornerback Troy Hill and outside linebacker Samson Ebukam, as well as key reserve rusher Morgan Fox. 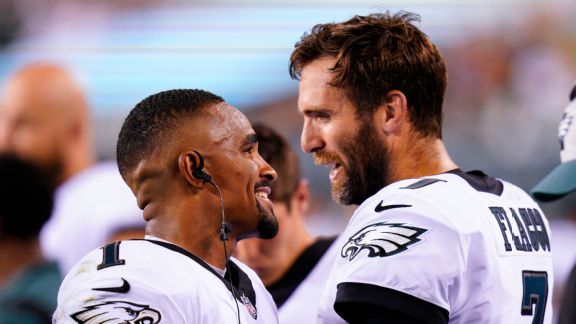 The Rams will turn to sixth-year defensive lineman A’Shawn Robinson to step in for Brockers, to third-year pro Taylor Rapp to take over for Johnson and to third-year cornerback David Long to prove his development in the secondary. Outside linebackers Justin Hollins and Ogbonnia Okoronkwo are working in on the edge.

How the Rams’ 2021 defense is progressing under Morris will remain mostly a mystery until the season opener against the Chicago Bears on Sept. 12 on Sunday Night Football. For a fourth year, McVay is not playing starters in preseason matchups and instead the Rams are depending on competition from three joint practices, including one against the Dallas Cowboys and two against the Las Vegas Raiders, to measure progress against opponents.

Morris said he felt confident with what he saw against the Cowboys, though it wasn’t without some areas that need improvement.

What Morris has consistently liked is the mentality of the unit.

He has a saying that “stats are for losers,” and instead wants the focus to be on making memorable plays.

“We got to go out there and we got to make those splash plays and those plays that make a difference in the game,” Morris explained. “We like to call them MAD plays, ‘Make A Difference’ plays, right? So, if you go out and you establish that culture and you established those things, you’ll be the best defense.”

And that’s no joke.