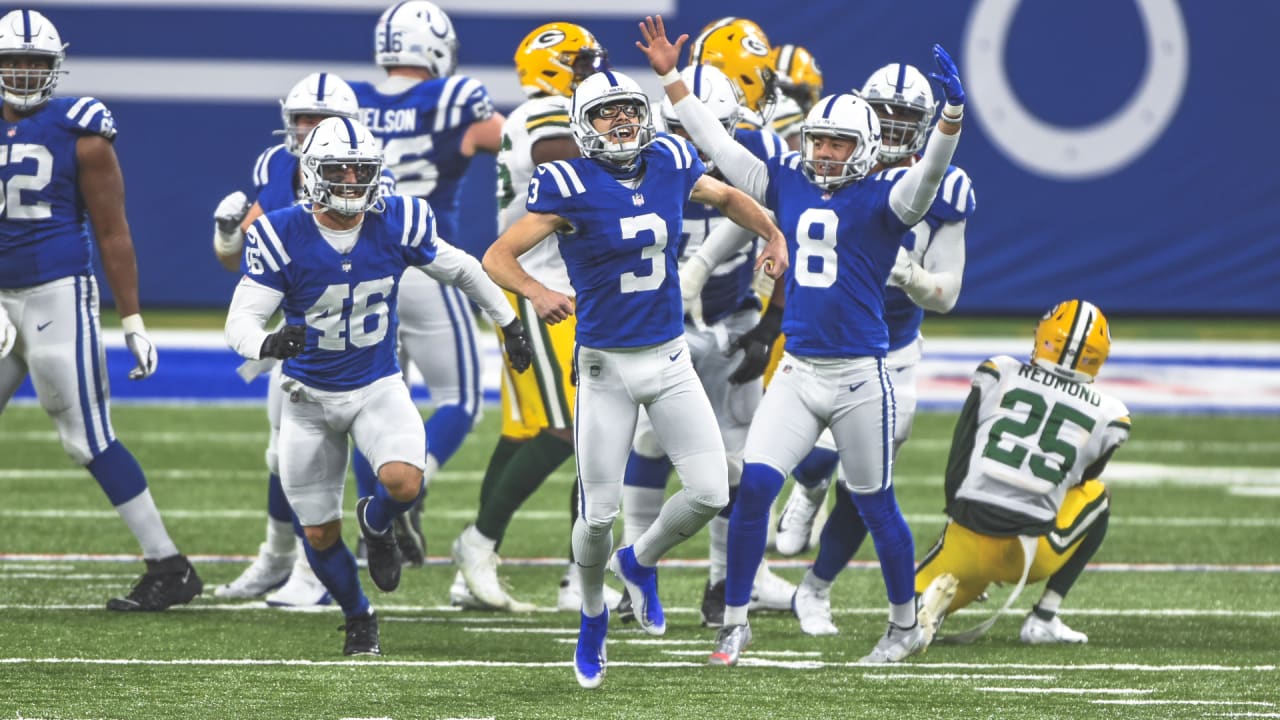 The beast in the early goings of Sunday’s game for the Colts (7-3) was their inability to capitalize on some uncharacteristic mistakes by the Packers (7-3), while Green Bay was able to do quite the opposite whenever Indianapolis would cough up the football.

In fact, the Packers went into halftime with a 14-point lead, 28-14; at that point in the ballgame, Green Bay had scored 14 points off two Indy turnovers, while the Colts were unable to get any points off two Packers turnovers over that same span.

But, as they’ve proven in several games already this season, the Colts came out of the halftime break ready to turn the tide.

By the end of the third quarter, Indianapolis had pulled within three points, 28-25, and was driving for an eventual game-tying field goal. The Colts held the Packers to two three-and-outs on offense in the third quarter on Sunday, while the Indy offense had nine first downs, 125 total net yards and saw rookie running back Jonathan Taylor explode for seven carries for 56 yards in that period alone.

“I mean, 14 points isn’t that much, to be honest with you, and there is plenty of time,” Reich said of the Colts’ attitude coming out of the second half on Sunday. “To be able to come out and run the ball the way we did, I just think builds momentum. I just think even though we ended up having to kick a field goal (on the opening drive of the third quarter), it just establishes a physical presence that we need and that we want.”

The fourth quarter of Sunday’s game — particularly the final two minutes or so — was about as crazy a ride as you’ll get in the NFL.

The Colts tied the game at 28 on a 32-yard Blankenship field goal with 11:17 left in regulation. Defensive end Cassius Marsh, just elevated to the active roster from the practice squad on Saturday, would then force a fumble on the ensuing Green Bay kickoff return, which was recovered by safety Tavon Wilson at the Packers’ 28. Four plays later, Blankenship would nail a 43-yard field goal to give the Colts their first lead of the game, 31-28, with 9:01 left in the fourth quarter.

Facing 4th and 1 from the Indianapolis 34 on the ensuing drive, Packers quarterback Aaron Rodgers, who at 36 (and turning 37 next week) is still playing like an MVP candidate, was rushed into an incomplete pass attempt to running back Jamaal Williams; turnover on downs with 3:06 to go and the Colts leading, 31-28.

Then came one of the most ridiculous endings to a regulation that you’ll see.

The Colts got to their own 49-yard line when wide receiver Zach Pascal was flagged for illegal motion. On 3rd down, Rivers found running back Jordan Wilkins for a gain of 15, setting up 4th and 4 from the Green Bay 36; get this conversion, and the game, one would hope, is essentially over.

Rivers delivered, finding running back Nyheim Hines for a gain of 13 yards and a first down.

The next play? Holding on right guard Mark Glowinski. Two plays later: holding on left guard Quenton Nelson and right tackle Chaz Green, in for an injured Braden Smith. Two plays later, Rivers is rocked as he tries to throw by star Packers pass rusher Za’Darius Smith, and the ball was scooped up by Christian Kirkley, who returns it 71 yards for a go-ahead touchdown with 1:47 left.

But wait a minute: after review, the officials say Rivers’ arm was moving forward with possession of the ball, so it’s changed to an incomplete pass. On 4th and 26 from the Green Bay 39-yard line — remember, the Colts faced 1st and 10 from the 23 just five plays earlier — Rigoberto Sanchez’s punt was downed at the Packers’ 6-yard line.

Trailing 31-28, the Packers had 1:25, 94 yards ahead of them and one timeout to, at the very least, get into field goal range to force overtime. After missing on two straight pass attempts to Allen Lazard to open the drive, however, Rodgers somehow was able to connect on a deep ball right down the middle of the field to Valdes-Scantling, who was brought down at the Indianapolis 47-yard line after a gain of 47. Timeout Packers.

Rodgers then connected with Davante Adams for 14 yards. Spike. Then Rodgers to Adams again, this time for 18 yards to the Indianapolis 15-yard line. Spike. Then a seven-yard completion to tight end Robert Tonyan. On 3rd and 3 from the 8-yard line, though, Rodgers’ pass attempt to Adams sailed incomplete, though Mason Crosby was able to send the game to overtime with a chip shot 26-yard field goal.

The Colts were disappointed, but not discouraged. They were called for seven penalties in all in the fourth quarter, four of which, all offensive holding calls, were accepted (two additional holding calls were also declined).

“You have to reset,” Rivers said. “You have to quickly reset because you feel like, ‘Aw, we let the game get away’, but wait a minute, it’s 31-all and we’re kicking off and we have an overtime period.”

The Packers won the coin toss in overtime and elected to receive. A touchdown on their opening drive and the game is over.

On first down, Rogers connected with running back Aaron Jones for a gain of eight yards. But on 2nd and 2 from the Green Bay 30, that’s when Blackmon made the play — again.

Early in the fourth quarter of the Colts’ eventual Week 4 win over the Chicago Bears, it was Blackmon picking off Nick Foles to seal the victory. Two weeks later, Blackmon picked quarterback Joe Burrow late in the fourth quarter to foil a possible Cincinnati Bengals comeback win. And on Sunday against the Packers, Blackmon — who is still less than a year removed from a torn ACL suffered in his final collegiate game at Utah — read the screen play to Valdes-Scantling all the way, split a combo block by Lazard and Tonyan and reached out and knocked the ball out of the receiver’s grip, which was recovered by a diving Buckner at the Green Bay 29-yard line.