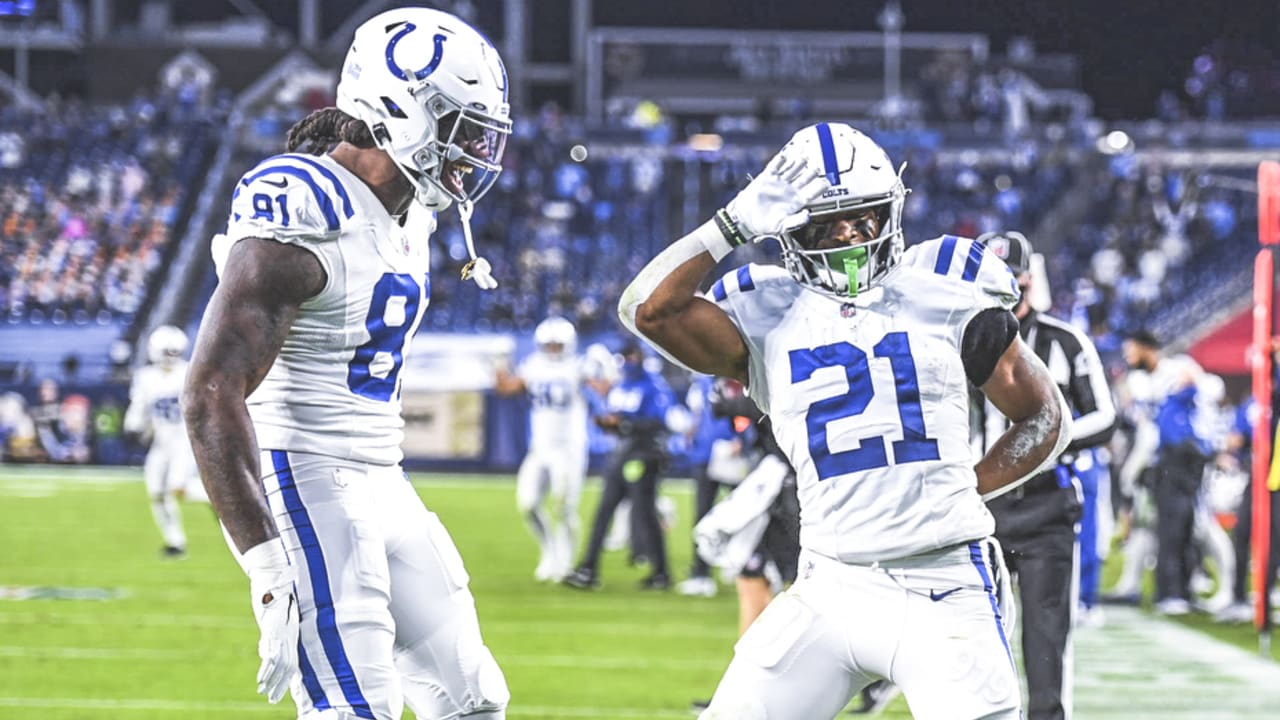 The Colts and Titans (6-3) have made close, physical battles pretty much a biannual occurrence since Reich and Tennessee head coach Mike Vrabel took over their respective teams in 2018, but Thursday’s game, particularly in the first half, was perhaps one of the more entertaining matchups in the series’ recent history.

A look at the boxscore over the first two quarters would likely lead one to believe that Indianapolis headed into halftime with a decent lead. In the first half, the Colts had 251 total net yards to the Titans’ 156; quarterback Philip Rivers had 209 passing yards, a touchdown and a 105.3 quarterback rating; and, while he had 10 rushing attempts for 51 yards to that point, the Indy defense was mostly able to contain All-Pro running back Derrick Henry.

The Colts tied the game at 10 midway through the second quarter with a Nyheim Hines 13-yard touchdown reception from Rivers. On the ensuing Titans drive, on 2nd and 10 from the Tennessee 39-yard line, defensive tackle DeForest Buckner was called for an offsides penalty. Two plays later, defensive tackle/end Denico Autry was also flagged for an offsides penalty, giving the Titans a first down near midfield.

The Titans pushed the ball into the red zone a few plays later when quarterback Ryan Tannehill, on 2nd and 11 from the 18, launched a pass into the end zone intended for wide receiver Cameron Batson, which fell incomplete. But cornerback Rock Ya-Sin was flagged for defensive pass interference, setting Tennessee up with 1st and Goal from the 1-yard line.

After the defense stuffed Henry for a loss of one, Tannehill was unable to connect with his top receiver, A.J. Brown, on second down; but a roughing the passer penalty on defensive tackle/end Tyquan Lewis set the Titans up with 1st and Goal from the 1 again. They’d cash in this time, as tight end Jonnu Smith ran it in from one yard out to give Tennessee a 17-10 lead with 2:58 left in the second quarter.

Of the four Colts defensive penalties on that drive, three of them gave the Titans a first down.

Rivers and the Indy offense, meanwhile, did find some success throughout moving the ball throughout the first two quarters, but oftentimes found themselves in high-pressure situations on third and fourth down.

After the Titans marched right down the field for a touchdown on their opening drive, the Colts took a more deliberate approach. Five plays into Indy’s first drive, on 4th and 1 from the Indy 45, Jonathan Taylor moved the chains with a two-yard run. Six plays after that, Reich elected to go for it again on fourth down, this time with one yard to go from the Tennessee 29-yard line.

But this time, with defensive end Jadeveon Clowney in his face, Jordan Wilkins was unable to go anywhere, and he was stopped for no gain by cornerback Malcolm Butler. Turnover on downs; early opportunity squandered.

Despite these issues on both sides of the ball, however, the Colts were encouraged with their chances heading into halftime.

“The mood was great,” Reich said. “We just kind of came in and said, ‘This is what we expected — a tight game.’ Just going back and forth. Felt like we were able to do some things, but we needed to lock in and finish it off.”

But the second half started to look eerily like the first two quarters for the Colts’ offense. On their first drive of the third quarter, Indy once again faced multiple fourth downs, and Reich kept his foot on the gas. 4th and 2 from the Tennessee 25? Rivers connects with Zach Pascal for a gain of nine. 4th and 1 from the Tennessee 7? Taylor gets two yards to move the chains.

Then, finally, after a four-yard touchdown toss from Rivers to Pascal was overturned, as a replay indicated the receiver was down just short of the goal line, the Colts faced 4th and Goal from the 1-yard line. Wilkins, again, got the handoff, and, again, he was stuffed for no gain. Another turnover on downs with no points to show after a long drive.

Leave it to the Colts’ defense and special teams units — as they’ve done at other junctures throughout the first half of the season — to be the catalyst from there.

With Henry briefly out of the game, the Titans faced a 3rd and 1 from their own 20-yard line on their first drive of the second half; Autry would make up for his earlier penalty by bringing down Tannehill for a sack — his fourth in the last three games — and a loss of 10 yards, forcing a punt.

That punt, by the way, would be shanked for just 17 yards to the Tennessee 27. The Colts took advantage of this crucial mistake, as Hines found the end zone from two yards out — this time via the run — four plays later to give the Colts a 20-17 lead with 2:55 left in the third quarter.

Then it was the Colts’ special teams’ turn.

After a three-and-out by the Titans’ offense on their ensuing drive, linebacker E.J. Speed brought the heat from the interior and blocked Trevor Daniel’s punt, which was scooped up by cornerback T.J. Carrie and returned six yards for a touchdown. All of a sudden, with 1:52 left in the third quarter, the Colts were in full control, leading by 10, 27-17.

The play by Speed and Carrie represented the Colts’ first blocked punt and return for touchdown since 2010.

“We had a blitz-screen lined up to where I could knife inside the seam and it came open. Once it came open, it was time to make a play,” Speed said. “I made the play, we scored, and it changed the game.”