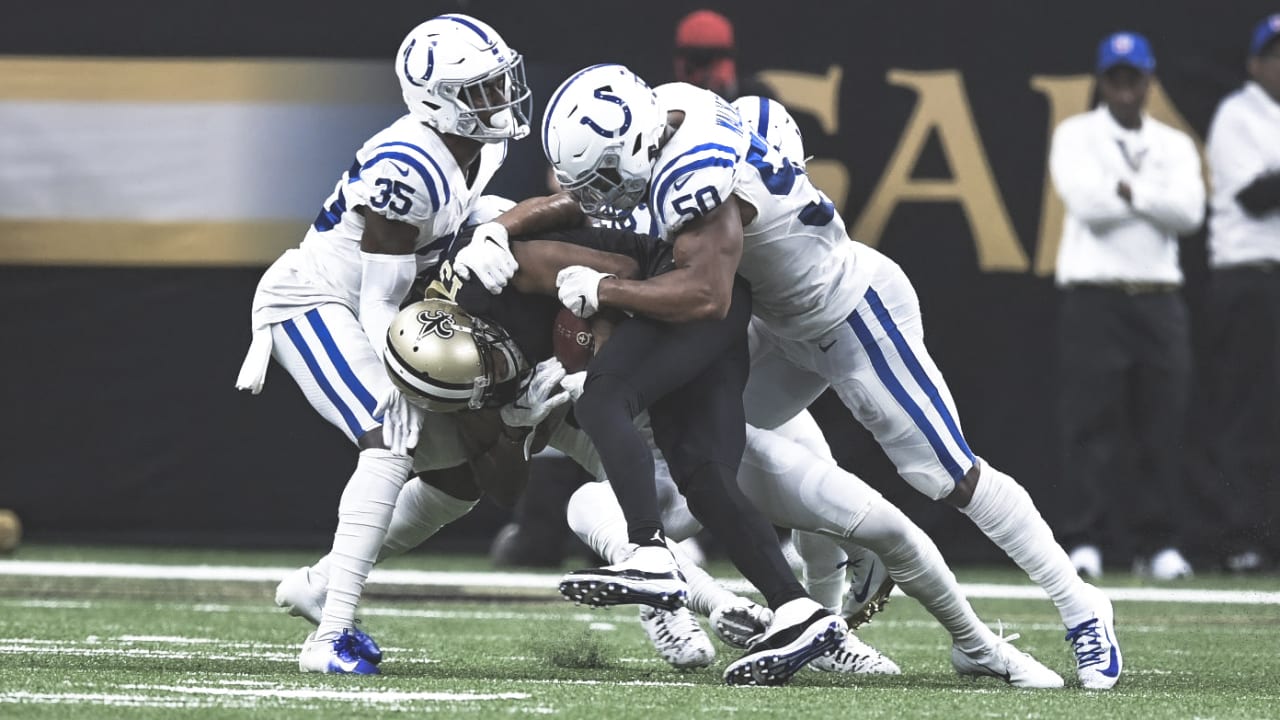 NEW ORLEANS — Any loss to the New Orleans Saints on Monday night would’ve officially ended the Indianapolis Colts’ playoff hopes for the 2019 season.

But the way the team ended up suffering that loss, on the road in blowout fashion in front of a national audience, makes Indy’s flight home that much more disappointing.

The Colts fell to the Saints 34-7 in their Week 15 contest on Monday Night Football, as the hosts put on a show and dominated in all three phases in front of a lively crowd at the Mercedes-Benz Superdome.

At 6-8, the Colts are officially eliminated from playoff contention.

“Obviously a very disappointing performance, to say the least,” Colts head coach Frank Reich said. “We’ve had some disappointing losses this year — obviously we haven’t had one like this. Every loss has been a one-score game, and in this one we got our butts beat bad in all three phases. That’s hard to swallow.”

Offensively, the Colts could never find any sort of rhythm — and if it wasn’t for a late one-yard touchdown run by Jordan Wilkins, Indy could’ve been facing its first shutout loss of the season. The team had just 205 total net yards of offense on the night, including just 46 on the ground, while quarterback Jacoby Brissett completed 18-of-34 passes (53 percent) for 165 yards with no touchdowns or interceptions.

Defensively, Indy could do little to stop an all-around record-breaking performance from Saints quarterback Drew Brees, whose 96.7 percent completion percentage set a single-game NFL record with a minimum of 20 passing attempts.

Brees, in all, completed 29-of-30 passes for 307 yards and four touchdowns, as the Purdue product passed Colts legend Peyton Manning (539) for the most career passing touchdowns in NFL history (541).

And on special teams, the Colts struggled from the gates, as their first punt of the day was partially blocked and set the Saints (11-3) up with prime field position for their first offensive drive at the Indianapolis 33-yard line. Making matters worse was a holding penalty called on Indy’s protection team on punter Rigoberto Sanchez’s first attempted kick that would’ve resulted in a downed punt inside the New Orleans 5-yard line.

Any way you look at it, the Colts — who have lost four in a row and six out of their last seven games after starting the season with a 5-2 record — simply didn’t get the job done on Monday night.

“We knew we were coming into a hostile environment against a good team, and we didn’t get that done today,” Reich said. “And that starts with me as the head coach. I’ve got to get the guys prepared better, we’ve gotta coach better. So make no mistake about it, first and foremost, that is on me.

“It’s hard,” Reich continued. “I mean, these losses are tough, the way they’ve mounted up. There’s no excuses for it.”

With the playoffs officially not in the cards the rest of the way, the Colts have two more opportunities to put an end to their recent struggles, beginning on Sunday at home against the Carolina Panthers (5-9).

From this point on, pride is on the line for this Colts team.

“(It’s) for each other, you know?” Brissett said when asked what the team has to play for the rest of the way. “And to play in the NFL, to be part of a team, be a part of a great organization and be able to go out there and prove yourself. And we get that opportunity next week. You know, a lot of people wish they were in our shoes, to be honest with you, and we’ve just gotta go back to work.”