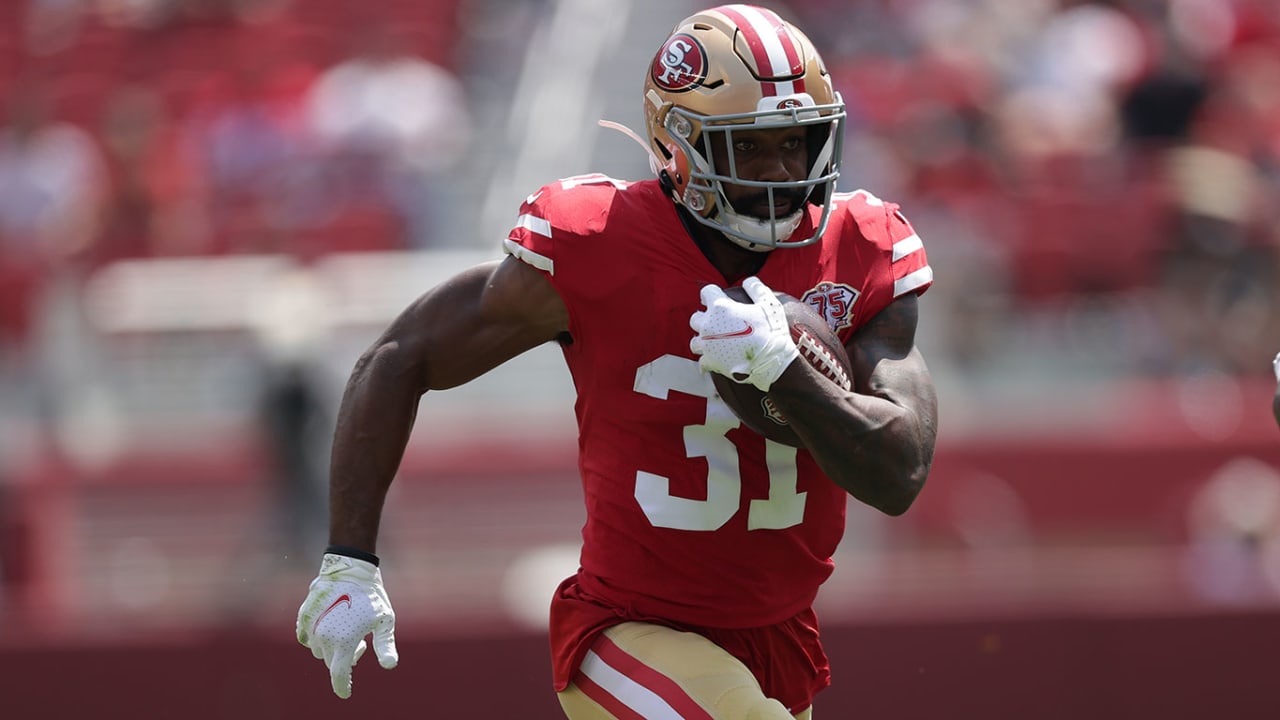 The 49ers hope to put last season’s injury-ruined season behind them and enter 2021 with many intriguing fantasy options. The team went all in at quarterback during the offseason, bringing back Jimmy Garoppolo and trading up to draft Trey Lance﻿. While it remains unclear when the switch will happen, Lance’s rushing ability in this system would make him an easy top-10 fantasy QB the moment he takes over. The rookie ran for 1,100 yards and 14 touchdowns as a 19-year-old in college and will benefit from San Francisco’s offensive line and Kyle Shanahan’s play calling. Even with the uncertain timeline (and currently dealing with a chipped finger), Lance is rightfully still being drafted as a top-15 quarterback in high stakes fantasy leagues right now. His upside is through the roof.

Regardless of who’s playing QB (Lance would be a threat to steal goal-line touchdowns but would also freely open holes), San Francisco’s running backs should have big seasons if health cooperates. Raheem Mostert has totaled 1,500+ yards and scored 16 touchdowns over his last 17 games (playoffs included), as durability is his only concern. Rookie Trey Sermon has a bit of an injury history himself, but he impressed throughout summer and enters as the team’s clear No. 2 back on a team that might run the ball 500 times. Sermon is familiar with an outside zone scheme and could be a fantasy “league winner” should he take over as the 49ers feature back down the stretch. JaMycal Hasty is third on the RB depth chart and worth a late round fantasy flier in deeper leagues.

George Kittle has a strong argument as the best real life tight end and is drafted universally as a top-three fantasy one. He maintains San Francisco’s theme with health being the biggest question mark entering 2021. Tight end is by far the thinnest position in fantasy and getting elite production there could be key to 2021 success.

Brandon Aiyuk greatly impressed last year, when he somehow saw the second-most targets inside the five-yard line (behind only Green Bay Packers Davante Adams) despite missing four games and being a rookie. He racked up 45 catches for 568 yards and four touchdowns over his final six healthy games while catching passes mostly from Nick Mullens﻿. Aiyuk should also benefit once Lance’s stronger arm takes over. I have Aiyuk as a top-15 fantasy wide receiver entering 2021.

Deebo Samuel somehow had more yards after the catch than receiving yards last season and is yet another 49ers player whose main concern is health. He’s being drafted as a top-35 fantasy WR, but there’s potential for more. Trent Sherfield has emerged as SF’s most likely WR3 and is a deep sleeper in fantasy leagues, especially with all the durability concerns on the roster.

Nick Bosa (who recorded 15+ more pressures than any rookie ever) and Dee Ford return to a San Francisco defensive line that looks absolutely loaded. With the 49ers more than TD favorites to open the year in Detroit and projected to have the easiest schedule in the league by a wide margin this season, they have a strong argument to be drafted as the first fantasy defense off the board. San Francisco also has a strong case to be among the few Super Bowl favorites entering 2021.

Dalton Del Don has been with Yahoo Sports since 2013, covering fantasy football, baseball and basketball. He appears on multiple podcasts each week and currently resides in the Bay Area, where he is an avid fan of the Golden State Warriors and 49ers.

For more insight from around the league from Del Don visit here.