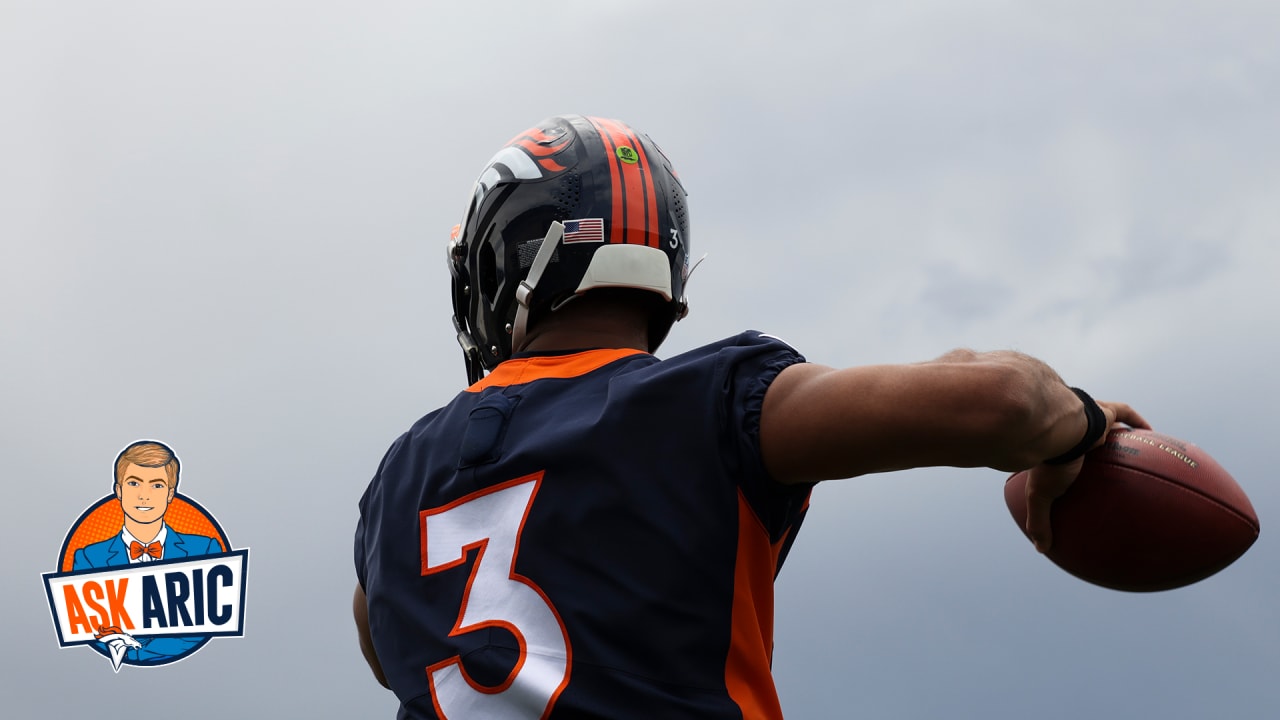 After watching voluntary veteran minicamp, rookie minicamp and a pair of OTA practices, we’re starting to get a better sense for this Broncos team.

In this edition of “Ask Aric,” I’ll answer questions about where the team stands at this point of the offseason, which undrafted players to watch, how Russell Wilson has operated as a passer and more.

To submit a question for a future mailbag, click here or send me a tweet at @AricDiLalla.

I was wondering how our O-line is acclimating to the zone-blocking scheme as we drafted primarily for, I believe a bit of a different skill set and these guys will apparently be on the move more and using some different skills. – Tom A.

Tom, that’s a fair question, as the Broncos’ newly implemented outside zone blocking scheme is different than the one they’ve used in recent years. It’s tough on a front office whenever a team changes schemes, because the intricacies of what you’re looking for in a player can change. That said, the Broncos should be in good shape. Many of their linemen have the desired athleticism for the system — think of Quinn Meinerz’s ability to move in space or Garett Bolles pulling against the Dolphins a few years back — and for certain players, this system may actually be better suited for their strengths.

“He’s a guy that you can do downhill stuff with like they have done in the past — the inside zone — but he can run off the ball,” Head Coach Nathaniel Hackett said of Lloyd Cushenberry III this week. “That’s something that you want to take advantage of. He can reach his shade, which he has shown consistently up to this point, and I can’t wait to get pads on so I can see even more.”

[Which side of the ball] do you feel is “ahead” of the other in terms of execution or playbook knowledge? – Brandon W.

Brandon, I still feel like it’s a little bit early to give you a solid answer. We’re only able to watch one OTA a week, which means it’s a very limited sample size. During last week’s open practice, the offense was electric and had the edge as the Broncos worked on red-zone drills. This week, the defense — led by Pat Surtain II’s interception — seemed to have the upper hand. In general, I’d expect the defense to be a bit further along. They’re playing in a similar system to last year’s, and nearly every projected starter is a returning player. The offense, meanwhile, is learning a new system with a new quarterback — and it seems to be a year-to-year trend across that league that offenses take a little bit longer to master. We’ve heard Tim Patrick and Javonte Williams both mention the complexity of the system — and the extra work it has required to find success. That said, I’d stress that it’s not particularly worth worrying about the performance of either unit. This time of year — particularly as new schemes and verbiage are introduced — the focus is on learning. When training camp arrives and we see the team perform every day, we’ll get a better sense of where the two units stand.

Who’s your tryout/non-draft pick to sneak onto the 53 prediction? – Jayne S.

Outside linebacker Christopher Allen is the trendy pick. In 2020, he led the SEC in tackles for loss and added six sacks as a second-team All-SEC player at Alabama. Allen’s path may be tricky, though. He must return from a foot injury that ended his 2021 season in Alabama’s first game, and he must also earn a roster spot at one of the Broncos’ deepest position groups. He’s part of a group that includes Bradley Chubb, Randy Gregory, Nik Bonitto, Malik Reed, Baron Browning and Jonathon Cooper — and teams can keep as few as four inside linebackers. I’d expect the Broncos would keep more than that, but it’s going to be a struggle for everyone to find a spot. So, then, I’ll take a flyer on East Carolina’s Ja’Quan McMillian. The Broncos’ starters are set with Pat Surtain II, Ronald Darby and K’Waun Williams, but there are likely three spots up for grabs at a position where teams tend to keep six players. Damarri Mathis will get one of those spots, I’d assume, and I’d think Michael Ojemudia will also earn a spot. McMillian, a slot cornerback, should battle Essang Bassey to earn a role as a reserve nickel cornerback behind Williams.

Will the Hackett offense utilize the fullback? – Jon C.

This offensive system traditionally uses a fullback, which led me to ask Hackett at the NFL Annual Meeting in March about what he looks for in that position. He singled out the idea of finding a player that can fulfill a variety of roles, including lining up in the backfield, splitting out wide or lining up as a tight end. Fullback/tight end Andrew Beck seems to fit that role, and Hackett mentioned him as a potential option. No matter who ultimately fills that spot — we’ve heard the team’s tight ends have also taken reps as fullbacks — I’d expect the Broncos to employ a fullback a decent amount. As Hackett said in March, it “cuts the defense in half” and adds an extra blocker that can help the offensive line.

What have you seen from special teams that excites you? Has anyone taken the lead for returner on KO and PR, or is it too early to tell? – @Orange_Crush512

We’ll see how it plays out when the games arrive, but I think it’s clear there’s a different level of energy surrounding the Broncos’ special teams unit than in years past. A siren noise precedes each special teams period, and Special Teams Coordinator Dwayne Stukes has set the expectation for what he expects from his unit. There will be no convincing players to be on special teams units, and he isn’t going to hand out the title of a core special teamer to just anyone. Stukes wants players who _want _to play special teams, and there seems to be an intensity to the drills we’ve seen that portends well for the unit. As for kickoff and punt return, General Manager George Paton has said the team hopes that rookie Montrell Washington can fulfill that role — but he’ll have to earn it. I don’t think we’ll really know who earns that job until after the live reps in the Broncos’ preseason games.

Hamler’s fighting back from more than we knew, as he recently revealed that he underwent surgery on his hip in addition to the previously acknowledged injured ACL. We’ve seen Hamler out at practice running routes, but the Broncos appear to be taking a cautious approach with the speedy wide receiver. Some days, he participates more in practice than others. There is no definitive timeline for Hamler to be fully cleared, but he said in May he hopes to return in time for training camp and that he is “well ahead of schedule.” When he’s back, don’t expect to see a downgraded version of the former second-round pick. “My speed ain’t going nowhere,” Hamler said. “I should be faster.”

So far from what you see, is Russ trying to be more of a pocket passer? Or is he still a hybrid? – Darian B.

I think you’ll still see a mix of passes from both in the pocket and out of the pocket. He said in late May that “everything starts from the pocket,” but he acknowledged that “you have to be able to dominate both.” There will certainly be throws that are on schedule and from the pocket — I’d expect this to be the norm — but part of Wilson’s charm is that he can escape the pocket and start the so-called second play that stresses a defense. That’s an integral part of his game and a major reason why he’s so hard for defenses to stop. Several Broncos defenders have admitted there are times when it seems like they should have a sack, and Wilson manages to slip away. Safety Kareem Jackson recently said “it sucks” to deal with Wilson’s mobility during practice, and that’s about as good as compliments can get. I certainly wouldn’t expect the Broncos to try to get rid of that facet of his game.

Who won the cover photo contest: Simmons or Sutton? – Jolene

For those who haven’t seen, the Broncos’ latest Showtime Cam showed two magazine covers that featured Justin Simmons and Courtland Sutton, respectively, as they modeled golf gear. Various Broncos weighed in on which cover was better, and they seemed torn on whose cover was better. I’m similarly torn. Justin looks more natural with the club in his hand, but Courtland does have the designer clothes that he points out. I’m going to give a slight nod to Court because of the background. He’s out on the course, which helps the aesthetic of the cover.

Yes, training camp will again be open to fans. The Broncos have been among the best in the league at hosting open practices for their fans during training camp, and that won’t change this year. The exact training camp schedule has not yet been announced, but the team typically shares those dates and times in late June or early July.