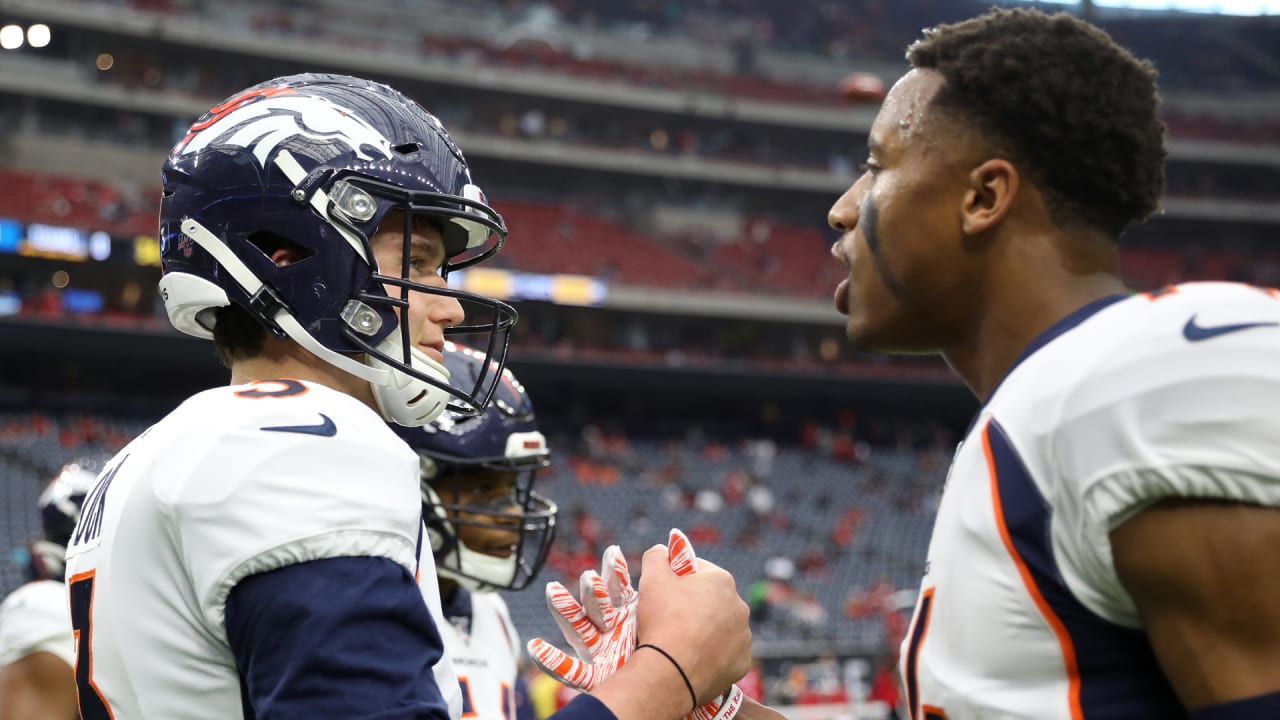 After the Broncos reshaped their roster by acquiring Jurrell Casey, A.J. Bouye and Graham Glasgow and by drafting the likes of Jerry Jeudy and KJ Hamler, ESPN NFL analyst Bill Barnwell came away quite impressed by Denver’s steps forward ahead of the 2020 season. In an article ranking NFL teams’ offseasons, he placed the Broncos third. To get a greater understanding of his perspective on the team’s 2020 outlook, including his thoughts on Drew Lock’s potential, we spoke to him recently over the phone on DenverBroncos.com’s “The Neutral Zone” podcast. Read on for a condensed transcript of the interview.

Aric DiLalla: A guy that maybe no one knows too much right now about now is Drew Lock. What are your thoughts on him, based on a very limited sample size, and can you make maybe some floor- or ceiling-type comparisons for him of guys that are currently in the league?

Bill Barnwell: “Oh, boy. Let me start with this — and I’ll be honest with my Drew Lock opinion. The last five games of the year for the Broncos, I saw bits and pieces. Obviously at that point of the year, I’m focusing on teams likely to make the playoffs. So I said, ‘OK, I’m going to watch Drew Lock during the offseason.’ The numbers looked fine. … I went back and watched all five games a couple weeks ago, right after the draft. I was impressed. He was someone I had watched in the preseason, I know he had struggled; I had been aware he was not getting the best reviews in August. … But he was a guy who, you know, watching him week after week, not only did I see why the Broncos would like him, but I saw him grow. I saw a guy who was athletic, who could make big throws, who seemed comfortable at times. I saw a guy who was putting the ball in the right place. I saw a guy who, when he was pressured, was able to escape that pressure and then crucially — I think this is such an important skill — reset quickly and then make throws that were accurate, over and over again. We really saw that consistently. All that was great.

“Decision-making [was], you know, good, pretty good certainly for a rookie. Some mistakes here and there, some mistakes that were like that. … The one thing that came to mind was watching him in the pocket, I did see some struggles when it came to his comfort in the pocket. [He’s] still a guy, I think, who was very aggressive to escape at the hint of pressure, and that can be tough. You look at someone like Baker Mayfield, and that was something that really sunk Baker Mayfield last year. … He didn’t really have a plan for when he felt pressure, and it came to the point where he was expecting pressure on pretty much every snap. And then on top of that, he kind of went to a place where teams knew, ‘OK, we don’t even have to rush the pocket. We can just rush the edges of the pocket and Baker’s going to come to us on the edges on those two [sides]. We don’t even have to worry about him in the pocket.’

“The comparison part might be tough, because I don’t think we have enough to say, ‘OK, this is definitely what his floor is, definitely what his ceiling is.’ I mean, he is obviously super athletic, and when you think about your prototypical quarterback, you want someone who’s big, who’s athletic, who can make good decisions. And I think Drew Lock has that possibility in him, and if you look at someone and say, ‘OK, he’s not the guy, there’s just no way he’s going to be a franchise quarterback,’ if you see someone who struggles with pressure, who makes questionable decisions, that could still also be Drew Lock. I think his floor and ceiling could go in a number of different directions at this point. So I think I was certainly pleasantly surprised, relative to my expectations, watching him on tape.”

AD: The Broncos obviously decided they’re going to build around him this offseason and added Jerry Jeudy, Melvin Gordon, KJ Hamler, and then you toss in Courtland Sutton, noah Fant, Phillip Lindsay. What sort of impact do you think they can make for Drew, and maybe which of those guys are you most intrigued to see this fall?

BB: “I’ll start with the second question: Noah Fant is someone I thought who looked so good with Lock in the lineup. And obviously a couple of plays were — not fluky, but I thought a couple of plays — I’m thinking of the first Texans catch … he basically got to turn upfield for 30 free yards. But that’s not really what I’m thinking about here; [he’s] a guy who was consistently productive, a guy who was a mismatch one on one, a guy who made plays beyond that one Texans catch. I think there’s a lot to be excited about, because even the best rookie tight ends don’t have big seasons, and Fant had a pretty good year. I am really excited to see if he’s going to be a difference-maker. … He could be a guy who’s athletic but inconsistent week to week, which is true for a lot of tight ends, and still you could have a good career doing that — but if he can be a week-to-week difference-maker the way he was for the last five weeks of 2019, that’s a scary, scary player, especially if you have Courtland Sutton, who looked great last year, occupying safeties and Jerry Jeudy, who looks like one of the best prospects in one of the deepest wide-receiver classes in league history, occupying the ball matchup on the other side. You could have Noah Fant matching up with a safety or linebacker on every single play, and that’s probably going to be a mismatch.

“And I think to the bigger point about Lock — whether he’s the guy or not — at the end of the day, your best chance of having a quarterback succeed is surrounding him with the right people. I think about Patrick Mahomes, and I know it’s an exciting comparison and also a dangerous comparison to make in the AFC West; I’m not comparing Lock to Mahomes. But with Mahomes, [he] was very inconsistent, I think it’s fair to say, in college. A guy who had some habits on the football field that were exciting when it came to his ability to make magic happen, but a guy who did not have that play-to-play consistency. So there were teams that were not super excited about Mahomes. When I go back and think about what I saw and what I heard from teams at the time and people who studied the draft really closely at the time, the idea was, ‘Hey, now he has Andy Reid around him. That’s the best quarterback coach probably in the league when it comes to developing any kind of quarterback, whether you’re Michael Vick or Kevin Kolb, and on and on and on. Then, obviously, with Patrick Mahomes, that first year he was a starter, I rank the weapons for ESPN every year, and I thought the Chiefs had the best weapons in football. They had Kareem Hunt; they had Tyreek Hill, of course; they had Sammy Watkins, who they had just signed; they had Travis Kelce. There were so many weapons that I was like, ‘OK, well if you’re Andy Reid and you have these weapons, Patrick Mahomes could be pretty good pretty quick.’ Now, I didn’t think he was going to be that good, and I’m not going to pretend I knew he was going to be that good, but they did everything to put a quarterback prospect who was promising but had some question marks in the best situation to succeed, and they got the MVP caliber campaign.

“Now, with Drew Lock. Again, Drew Lock could be an ordinary quarterback or a lot more — who knows. But he has the best possible chance of succeeding, because I think they did a great job surrounding him with the pieces he needs. The weapons, I think, are some of the best in football, on paper. Some of them I was honestly pretty skeptical [about, like] Melvin Gordon, but when Melvin Gordon’s healthy and not fumbling the football, he can be a very productive back. I think the receiving corps, at wide receiver you can’t question what they have. At tight end, I think Noah Fant could be a possible star. The offensive line, obviously, is still a question mark; they did sign Graham Glasgow. … Garett Bolles obviously is a major, major question mark at left tackle. The one sort of demerit you have for their offseason on offense would be not addressing that left tackle position further, but I do think at the end of the day, whether Drew Lock is an average quarterback in a vacuum, whether he’s a good quarterback in a vacuum or whether he’s a great quarterback in a vacuum, they’ve done so much to make Drew Lock better and give him a better chance of succeeding. I think you have to credit them [for] certainly a logical plan from [President of Football Operations/General Manager] John Elway.”

Tags: he him was