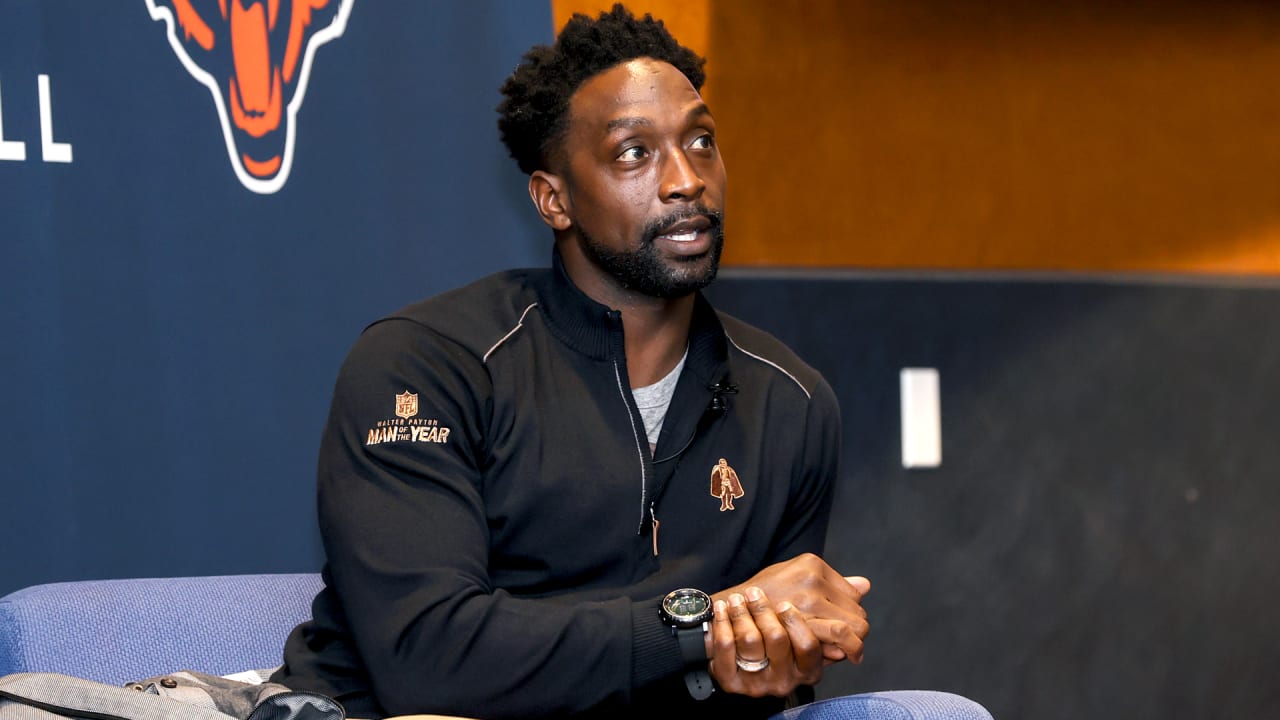 Tillman has been telling the NFL hopefuls to enjoy and embrace the process because it can be fun, but to also treat the Combine like one big job interview.

“Everyone’s evaluating you, so dress the part,” Tillman said. “It’s football, but at the same time it’s an interview. They’re picking you. You don’t pick them like your colleges. They pick you, so you have to impress them.”

A cornerback who played 12 of his 13 NFL seasons with the Bears from 2003-14, Tillman spoke to the defensive backs at the Combine Thursday night. He advised them to embody a next-play mentality while working out in Indianapolis.

Tillman also discussed the importance of knowing not only your own assignments and responsibilities on the field, but those of the entire defense. It’s a skill he lacked when he joined the Bears as a second-round pick from Louisiana-Lafayette in 2003.

“When I came to Chicago, I just knew what I had to do,” Tillman said. “And then [defensive backs coach] Vance Bedford was like, ‘You need to know everything.’ When you know what everyone does, not just you at corner, it allows you to play faster: ‘I can probably jump this because I’ve got safety help.’ Or, ‘I don’t need to take the inside fake because my end is dropping right there. He’s running to my defensive end, so why am I chasing that?’

“Little things like that I failed at. I wasn’t good at it early in my career. I wish I would have known that sooner, like in college. I didn’t really have the football IQ that I thought I did. So, I’m telling those guys now that you will really impress coaches when you expand your mind, that football IQ, learn the entire defense. Know what the D-end does, know what a 9-tecnhique is, know the drop, know your linebacker, know their run fits so when you run in there, you don’t need to run through the A gap, the linebacker’s there. Knowing all your run fits, you’re able to play a lot faster and you can make more plays that way.”

When Tillman participated in the NFL Combine in 2003, it was far from the spectacle it is today. Although he didn’t know what to expect when he arrived in Indianapolis, the future Bears standout improved his draft stock with a 4.49 in the 40, 40-inch vertical jump and 131″ broad jump.

“In 2003, the Combine was like a mystery,” Tillman said. “We didn’t have the glitz and glamour and showtime in primetime.

Tillman’s worst interview experience came with the Browns. He was introduced to their general manager and coach and then sat face-to-face with another member of the organization who asked all the questions.

Throughout the session, the man constantly interrupted Tillman, challenging his answers while raising his voice in a combative manner.

“The Browns, they were terrible,” Tillman said. “I knew the coaches and executives were right there so I was trying to keep my composure. But once the clock went off, I was like, ‘What the hell was that?’

“I was young; I was 22. I didn’t see what they were doing, but now looking back at it, I think they were just trying to [tick] me off. I do believe another [prospect] went off and snapped at the guy. He didn’t care about the coaches or anyone in that meeting. He just said, ‘You’re going to stop interrupting me, damn it. Don’t cut me off again!'”

Hester destined for Hall of Fame

Like the rest of Bears nation, Tillman was disappointed when record-breaking return specialist Devin Hester wasn’t voted into the Pro Football Hall of Fame last month in his first year of eligibility.

“I definitely think he should have gotten in,” Tillman said. “I think we all know he eventually gets in, but to be a first-ballot, that’s something very special.”

Hester played eight of his 11 NFL seasons with the Bears. The most prolific return specialist in league history, he holds NFL records with 19 kick-return touchdowns, 14 punt-return TDs and 20 return touchdowns, which includes punts, kickoffs, missed field goals, fumbles and interceptions.

Selected by the Bears in the second round of the 2006 draft out of Miami, Hester was voted to three Pro Bowls, won 13 special teams player of the week awards and was named to the NFL’s All-Decade Team for the 2000s.

“Look at what he’s done,” Tillman said. “He changed the game. People use the word ‘greatest’ loosely, but he is the greatest of all time at that position.”

Throughout Hester’s entire Bears career from 2006-13, Tillman was a teammate who frequently played on the return units, opening holes for the electrifying star.

“It was fun. You got excited because you knew all you needed to do is just give Devin an inch. I was tired [but was thinking], ‘I’m just going to give it a little bit more. I’m going to give him an inch and let Devin do the rest.’ That was 10 guys his entire time in Chicago.”

After setting an all-time NFL record with his 14th kick-return touchdown in a division-clinching win over the Vikings in 2010, Hester got teary-eyed when asked after the game about celebrating the accomplishment with his teammates.

“He was always very appreciative, kind of like a running back with his offensive linemen,” Tillman said. “He was extremely appreciative of what we did for him blocking for him.”

While Tillman has yet to garner Hall of Fame consideration, some fans and media members believe that he should be enshrined in Canton.

Tillman made an immediate impact with the Bears, becoming a starter four games into his rookie season and quickly developing into a star playmaker. He was part of a dominant defense that helped the Bears win three NFC North titles and one conference championship.

Tillman turned forcing fumbles into an art form by smacking the ball away from opponents, a technique dubbed the “Peanut Punch.” He forced 42 fumbles with the Bears, including a career-high 10 in 2012 when he was voted to his second straight Pro Bowl.

A decade later, NFL teams are still teaching the Peanut Punch to their players.

“When I hear other teams or coaches say, ‘I know you’re retired, but we still watch film on you,’ it’s paying homage and I’m very appreciative of that,” Tillman said.

Tillman had a knack for forcing fumbles at Louisiana-Lafayette, generally by trailing the ballcarrier and stripping him from behind. Once he entered the NFL, however, he had to adjust his approach.

“When I got to the league, everyone was fast,” Tillman said. “I didn’t think I could just let them in front of me. That would be bad. So, I had to punch in front and tackle at the same time. I didn’t do it head up and punching at the same time until [entering] the league.”

One of Tillman’s most memorable Peanut Punches came in a 2009 game against the Eagles. He had already forced two fumbles in the contest and running back LeSean McCoy was determined to do everything in his power not to become the third victim.

“He runs through the hole and there’s a swarm of us coming,” Tillman said. “He covers up like he’s coached to do. I just came with a right hook, punched hard and punched down. He had both hands on the ball, but it just popped out as he was going down.”

“The players have to buy into it,” Tillman said. “Whatever the coaches are telling you, you’ve got to believe it. You’ve got to be a soldier and [understand], ‘all right, this is the new culture.'”

Like Smith did throughout his tenure, Eberflus intends to be fanatical about generating takeaways, vowing at the Combine that it will be preached and coached on every single play. The Colts finished in the top 10 in the NFL in takeaways in each of Eberflus’ four seasons as defensive coordinator from 2018-21.

Tillman recalled that when he played for the Bears, creating takeaways and trying to return fumbles and interceptions for touchdowns was a mindset ingrained in the defense.

“It was a mentality,” he said. “We did it all the time. It was habit. That was our culture.”

Playing cornerback in the type of defense the Bears will switch back to in 2022 isn’t all about recording interceptions and pass breakups.

“You’ve got to tackle,” Tillman said. “You’ve got to be physical. I almost had 1,000 tackles in my career at corner, which is probably unheard of. And it’s not that I’m letting people catch passes on me. It was just the style of defense. You’re involved in run support. It was like a prerequisite to being a cornerback for the Chicago Bears, you had to tackle. You were involved in the run game.”

Tillman describes the scheme as “a selfless defense.”

“You have to be selfless to play in that kind of defense,” he said. “Your success is my success. I’m happy, we’re happy, we’re winning games. We had that. To have that, again, guys have to buy in. I’m playing for you, you’re playing for me. The good teams, the good locker rooms, they get that, they feel that and I think that’s the coaches’ job. You’ve got to make these guys really think that they’re brothers. I’ve got to be willing to put it all on the line for you so you can get a ring. And when your guys think like that, that’s when you know you’ve got a good team.”