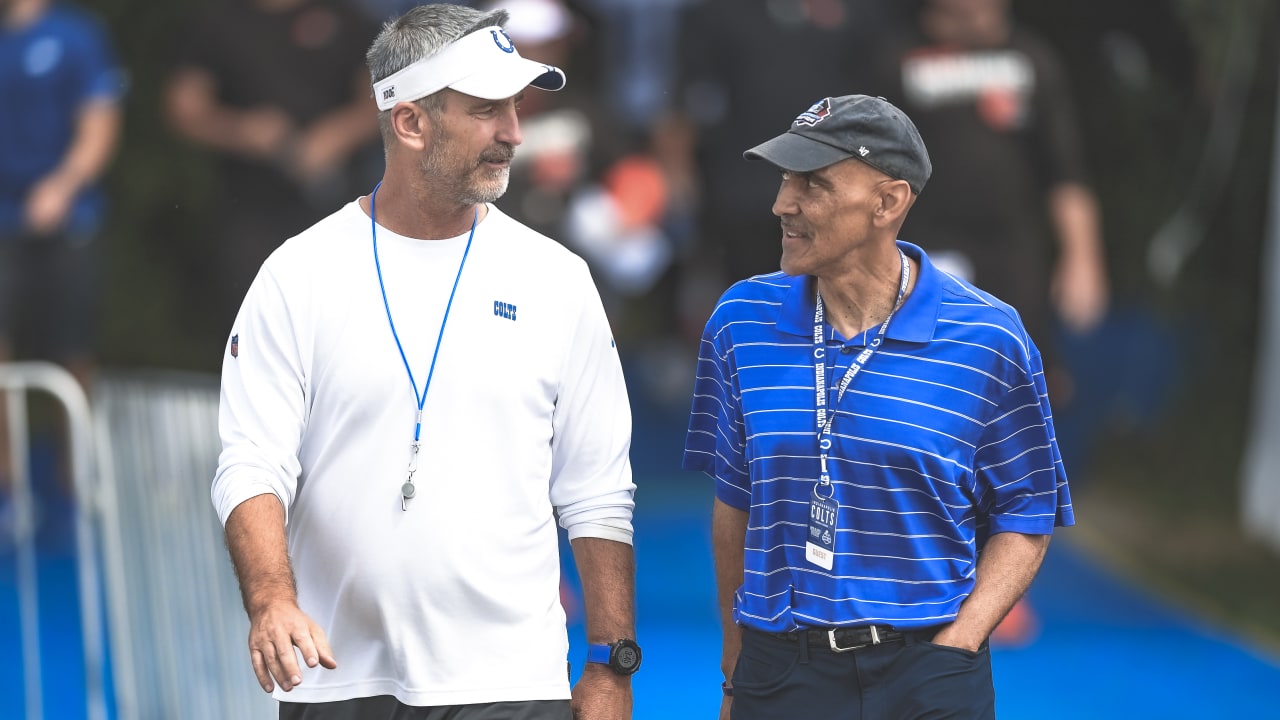 On being in Miami last weekend as Edgerrin James and Reggie Wayne were both being considered as finalists for the Pro Football Hall of Fame Class of 2020:

Dungy: “It was great. And, you know, just so many nerves, and you just want those guys to experience the same thing that I did. It couldn’t have come at a better time for Edgerrin, being in Miami, being introduced down there, University of Miami grad — I was really hoping for he and Reggie. But maybe we’ll look at next year and get Reggie and Peyton going in as a combination, like Marvin and I did. That could be just fantastic.”

On what makes James a Hall of Famer:

Dungy: “Well, I came the year he was coming back from his surgery. He had two just phenomenal years where he was the best back in football, and then he got the ACL injury in 2001, I came in 2002, and he was just really starting to get back. And he gained about 1,400 yards for us and just had a wonderful year. But it wasn’t until the next year, 2003, that I think he was really fully recovered. But I’ll tell you this about Edgerrin: the most complete back that I’ve ever been around. Obviously a great ball carrier — could run inside and outside — but he blocked and pass protected as well as any back that I’ve ever seen, caught the ball out of the backfield, tremendous hands, great route runner, understood things and he was a great teammate. So if you describe a Hall of Famer to me, that’s him — complete back, and a great teammate.”

On getting the Colts’ head coach job despite few face-to-face meetings with owner Jim Irsay:

Dungy: “I had met Jim many times at owner’s meetings, that type of thing, had a lot of respect for him from afar. We’re about the same age — I remember when he was coming up in Baltimore and those kinds of things. So I knew who he was and that kind of thing, but he hadn’t ever spent a whole lot of time together. So when I got let go in Tampa, I’m kind of discouraged and praying about things and asking the Lord what I’m gonna do and, ‘What does all of this mean?’ And I come home one day and I’ve got this long message on my voicemail, and it’s Jim Irsay, and it was so funny because he said, ‘Hey, I just want you to know that you’re the coach I want. I’ve made a coaching change, I want you. Let’s not get any agents in this and get it messed up; you and I can talk about money when it matters. But we wanna be something special here in Indiana. We wanna represent the NFL, but we’ve gotta connect with our fans. We don’t have a long history, 60 or 70 years here like some teams do. So we’ve gotta connect with the community, you’re the guy I want and that’s all you need to know.’ So I called him back and we talked on the phone and he was telling me, ‘Hey, we wanna win, we wanna win the right way, we’ve got a lot of good young men here, but we don’t need to get any agents involved in this.’ So he and I talked a little bit, and next thing you know I was the coach of the Colts.”

On the importance of his “All Pro Dad” program:

Dungy: “We actually started All Pro Dad when I was in Tampa, and thought it would be just a local Florida thing, and it started growing here. Well then, when I went to Indianapolis, Jim (Irsay), just out of the goodness of his heart, he said, ‘Hey, I know I’m taking your spokesman for All Pro Dad from you,’ and he made a huge donation that first day to All Pro Dad, and that kind of helped us get it going in Indiana. And then we went to Cathedral High School, and we saw what they were doing in terms of having dads come in once a month and meet with the kids, so we incorporated that, put these All Pro Dad breakfasts in place, and now we’re doing them at 1,500 schools around the country and it’s been great. So what it is, it just encourages fathers to spend more time with their kids, and it’s been fantastic; started in Tampa, grew to Indianapolis and now it’s in 49 states.”

Dungy: “I think they just need to stay on course, and not deviate. And a lot of things happened, of course, with Andrew (Luck) not being there — that was a big adjustment that we had to make — but I think that’s gonna come. And that offensive line is still in place, we’ve still got some great running backs. We had some injuries; obviously T.Y. (Hilton) not being 100 percent all year, Eric Ebron going down in the middle of the year and Jacoby Brissett getting hurt, Marlon Mack missing time. So it’s easy to say, ‘Well we need to do this, we need to do that because we had a losing record,’ but I think just staying the course, the defense will continue to grow, I love what Coach (Matt) Eberflus is doing with that defense — and so I think it’s just staying the course. And that actually happened to us in Tampa when I was coaching there, too: we went to the playoffs in 1997, we missed the playoffs in ’98, and I remember telling the team, ‘We aren’t retooling, we aren’t doing anything different: we are going to stay with our formula, our blueprint.’ ’99 we went to the NFC Championship Game, and kept going from there. So I think it’s just a matter of staying the course.”

On how he still refers to the Colts as “we,” and still feels part of the team’s family:

Dungy: “Absolutely. And when everything happened with the coaching change last year and I was on the phone with Jim (Irsay) and Chris Ballard, and my heart was going out the same way theirs was. And I just knew that Frank Reich was the right person for the job, and I’m just so happy the way things turned out. He’s gonna keep the ship going in the right direction. My heart is always going to be with Jim Irsay; I love Chris Ballard and the way he’s directing things. So, yeah, it’s definitely ‘We.’ I’m not supposed to say that on TV, but any place else I just say it.”

On the Hall of Fame chances of other players he coached in Tampa Bay and Indianapolis:

Dungy: “You know what? It’s gonna be very, very interesting on some of those guys. Ronde Barber has been up a couple of times — he’s been a finalist, and he put together a number of years of really, really great statistics in Tampa. (John) Lynch is close. Then you look at the Indianapolis side, and, gosh, Robert Mathis and Dwight Freeney, 100 sacks each — there aren’t that many people in the history of the league to have 100 sacks. And to do that and get to a couple of Super Bowls, they will be right on the cusp. Reggie Wayne’s gonna get in, at some point. When you’re a finalist your first year eligible, he’s definitely gonna get in. Peyton (Manning) will get in next year. Jeff Saturday, coming from a free agent to anchoring that line for all those years, and, again appearing in two Super Bowls — he’ll be very, very close. So I think we’ve got about six guys there that will be on the cusp.”

On Dungy’s dad, Wilbur, and his love of watching the Colts’ practices and games:

Dungy: “Well my dad loved practice. He loved to come out and watch, and that’s another special story people don’t really realize and never understand: my dad used to drive from Michigan to Indianapolis for all our home games, and then he would drive to a lot of our away games. And Mr. Irsay saw him one day at an away game and said, ‘Does your dad come (to these games?),’ I said, ‘He comes to every one he can get to.’ He said, ‘Just tell him to come to Indy and fly on the plane.’ So my dad’s last two years living, he flew to the away games on the plane with us. No one ever knew but that was just Jim Irsay, that’s the way he does business and why so many people love to play and coach for him.”