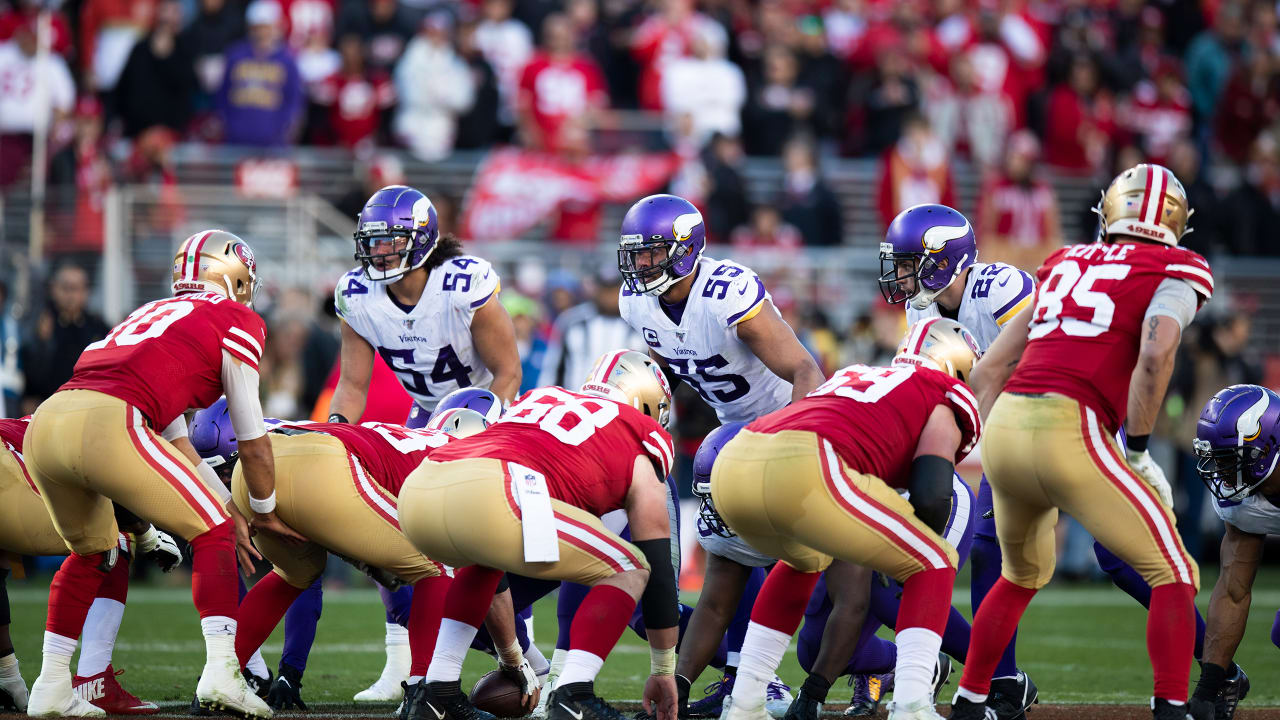 Winning in the trenches | By @LindseyMNSports

The Vikings will have their hands full in the trenches Sunday – on both sides of the ball.

Minnesota knows it will need a stout offensive line performance in order to keep Cousins clean in the pocket and get the Vikings run game going. It’s a tall task, though, going against the 49ers defensive line that features the likes of Arik Armstead and Nick Bosa. Fortunately for the Vikings, San Francisco traded DeForest Buckner to the Colts after defeating Minnesota in the 2019 Divisional Round playoff game.

“Well, Bosa’s a really good rusher,” Zimmer said Wednesday. “They lost the one guy to Indianapolis, but Armstead’s still a good player. The linebackers (Azeez Al-Shaair, Fred Warner and Marcell Harris) are fast, so they’ll use them in some pressures, but I’m trying to think back to what pass protection two years ago was … I think they’ve done a pretty good job for the most part, and I think Kirk [Cousins] knows where to go with the football. Their secondary scheme is similar to what it was.”

Vikings right tackle Brian O’Neill said he has a “ton of respect” for Bosa’s game.

“He’s extremely explosive, he’s long, he’s athletic. He can beat you with power, beat you with speed, beat you with [technique by] using his hands. He’s got everything,” O’Neill said. “He’s the whole package and one of the best in the NFL, so it’s a big challenge for me.”

A lot rests with the Vikings offensive line on Sunday, but we’ll also be watching the shorthanded defensive line.

Everson Griffen has been placed on the Reserve/Non-Football Illness list. That means that all four starters – Griffen, Michael Pierce (Injured Reserve), Dalvin Tomlinson (Reserve/COVID-19) and Danielle Hunter (Injured Reserve) – will be sidelined for the NFC matchup.

The Vikings will look to D.J. Wonnum, who has been starting in Hunter’s absence and Sheldon Richardson, who started the season playing 3-technique but has been played most of last week’s game at defensive end.

“They have better recall, so it’s not like starting completely over,” Zimmer said. “Tashawn’s done a good job this week. He remembered a lot of things. So, we’ll see.”

Tags: he vikings will