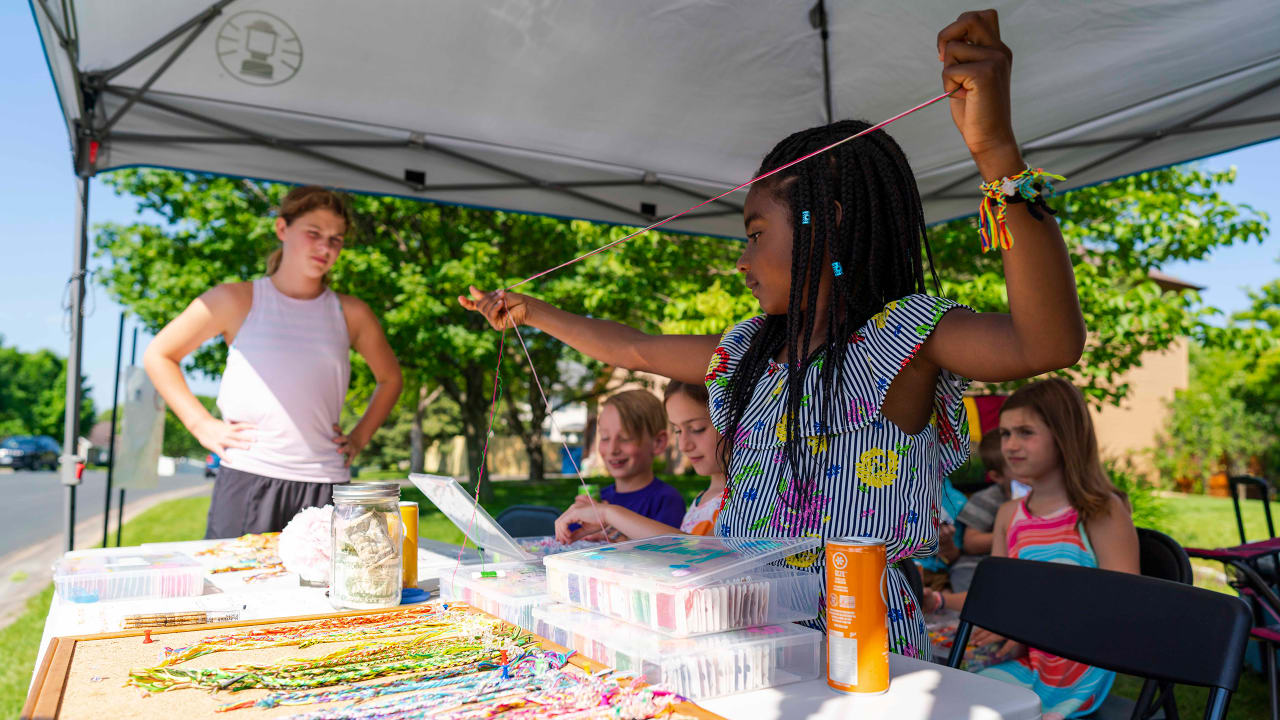 Ron noted the significance of athletes supporting the black community, whether it be through peaceful protesting or purchasing a custom-made friendship bracelet.

“I see [the Vikings during the season] and they know me from football stuff, but just to see them understand that this is important and, honestly, when you have a white voice and you can say that, [it’s impactful],” Ron said.

Kamryn & Friends has not only gained national exposure but also brought together the group of Chanhassen neighbors who have been all hands on deck in braiding the colorful thread.

“That’s the part that we weren’t expecting.” Shani said. “Not only are we doing this for other people, but we’re also uniting with the people in our neighborhood. That wasn’t a goal, that wasn’t even something I imagined could happen, so that’s been sweet, too.”

Ron observed Kamryn becoming friends with other young people in the cul-de-sac during the school closures caused by the COVID-19 pandemic, and the relationships have grown even closer through this fundraiser.

“Kamryn being black in a white neighborhood, it was tough sometimes for her to figure out, ‘Who are my friends? Who can I play with? Who’s gonna play with me?’ ” Ron explained. “Just to see this, I think it’s kind of added and solidified the fact that, whatever they [may have thought initially], if you don’t interact with African-American kids, you don’t really know, and I think now it’s kind solidified, ‘OK, yes, she looks different, she is different, but we are friends.’

“I hope for them, as kids, they can see this, too. Some people grow up thinking that it’s the same for everybody, and it’s not,” Ron continued. “I hope that they all understand that. Whether they see somebody do something racist, or they’re all at the park together and a kid does something that’s wrong, I would hope that they realize, ‘We’re all friends in this’ and they would stand up for it.”

Kamryn and her parents hope to potentially keep the bracelet effort running one day a week throughout the summer in order to keep social-justice issues and the need for community support top-of-mind.

Some of the money raised has already been donated, including to Kyle Rudolph’s recent food and supplies drive and to Sanctuary Covenant Church in Minneapolis, but the family plans to continue seeking out the places of highest need over the coming weeks and months.

“There are certain causes that everyone is jumping on, and I’m more concerned about who’s slipping through the cracks – and who that will be three months from now when [donations slow down].” Shani explained. “The ones that might be missed, we want to see them.”

She also shared a deeper motivation behind the give-back efforts.

“We’re doing it for the glory of the Lord,” Shani said. “I love the [Bible] verse [Micah 6:8] – ‘Act justly, love mercy, walk humbly’ – that’s one of my favorites, and we try to live that out in a way that is visible to others, where we’re loving others well, but also in a way where it’s changing us.

“Living justly should change us, too,” she added. “We pray every morning and every evening that we make an impact for the Lord.”

The Johnsons hope that Kamryn & Friends will show people, particularly youth, that it’s possible to make a difference wherever you are.

Asked what she’s learned over the past nine days, Kamryn smiled and said with confidence, “Know that you can always find a way to help other people.”