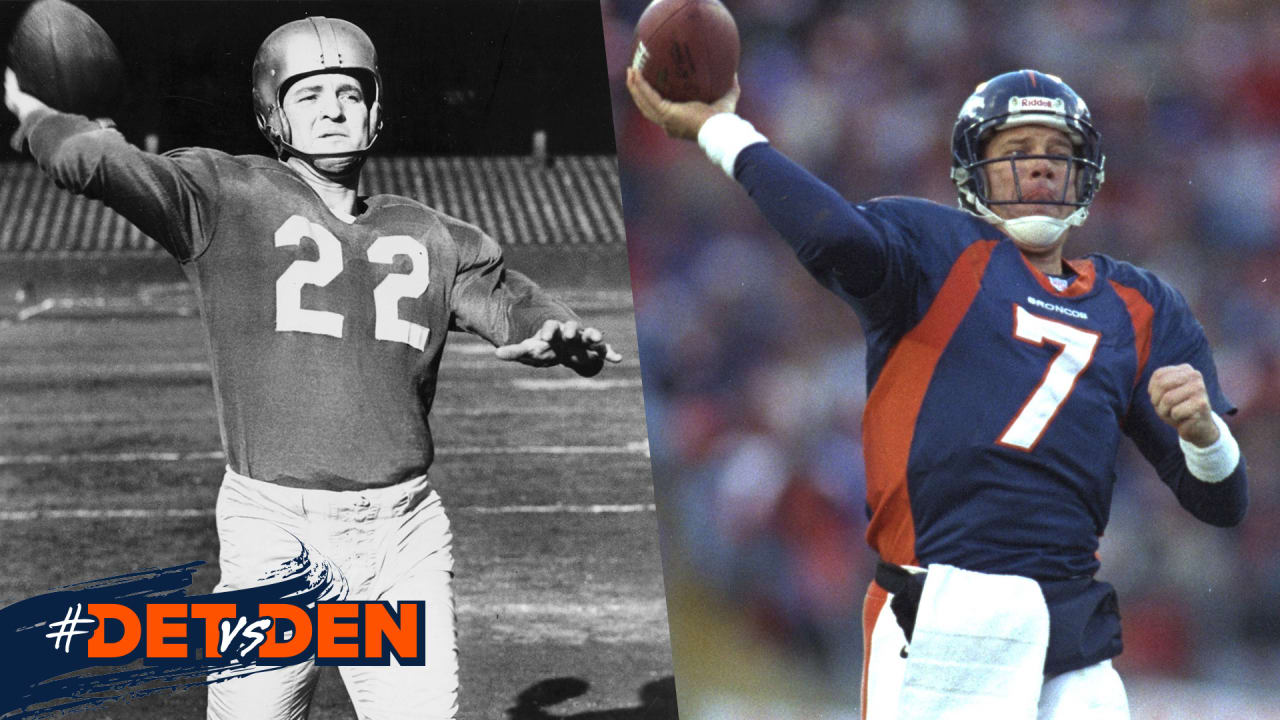 The Denver Broncos face the Detroit Lions this weekend, and while the two teams do not play each other frequently, they certainly have some historical similarities.

Much of pro football history revolves around the quarterback position, and both the Broncos and Lions seemed poised to have two Hall of Famers at that spot.

For the Broncos, everyone knows about the legendary John Elway, and Peyton Manning is poised to join him in the Hall of Fame in 2021.

The Lions’ Hall of Famers were way back when, with the first being quarterback-owner and coach Jimmy Conzelman.

While today fans might not be familiar with him, Conzelman was one of the first inductees into the Hall.  He was enshrined alongside Art Rooney in just the Hall of Fame’s second class of inductees.

Conzelman played and coached for four different teams in the 1920s and later coached the Cardinals to a 1947 NFL championship.

More recently, the great Bobby Layne quarterbacked the Lions in the 1950s.

And while fans are familiar with the meticulous preparation of Manning, Layne was the first QB of whom it could be said that he read his playbook by the light of a jukebox, in a bar room rather than a meeting room.

He led the Lions to three titles in the 1950s and played in four championship games.

Elway, of course, led the Broncos to consecutive Super Bowl titles as a player and then to another as general manager, with Manning as quarterback.

Both Elway and Manning were model citizens within the NFL world.

But it was a little different for the Lions in the ’50s.

They had already won two championships under head coach Buddy Parker, but at the kickoff luncheon just prior to the start of the 1957 season Parker resigned.

He announced that he could no longer control of the players on the Lions.

The ringleader, of course, was Layne, of whom Hall of Famer Doak Walker once said, “Bobby never lost a game. Some days, time just ran out on him.”

The Lions named George Wilson as their new head coach, and they rolled to the title, beating Cleveland and Otto Graham 59-14 in the championship game.

Layne injured his ankle in December, and Tobin Rote led Detroit the rest of the way.

Rote had one of the great championship games ever, passing for 280 yards and four touchdowns, while running for another.

While Tobin Rote is another name not familiar to most Bronco fans, he actually played briefly for Denver in 1966, at the tail end of another legendary career.

Few know, however, that the blitz was invented and popularized by the Detroit defense and defensive coach Buster Ramsey, who also coached in that legendary time of the 1950s.

Bringing ourselves back to the present, the connections continue.

One of the young quarterbacks on the Detroit roster is David Blough, an undrafted rookie who had an outstanding college career at Purdue University.

Blough’s coach at Purdue was none other than Jeff Brohm, a former Broncos quarterback who spent a year in Denver as a backup in 1999.

Brohm has done a great job as a college coach since his year in Denver, and Blough is his most recent contribution to the NFL quarterback position.Way Back Wednesday: A legacy of quarterbacks

History moves in its own time and at its own pace, but there are similarities between teams if one looks for them. It is no different for this weekend’s game between Detroit and Denver.

Which unheralded players have stood out because of…

If Drew Lock plays, how effective will he be?

Why Fridays are tougher on Cowboys QB coach Doug…