The best quarterback in Week 13 (going into Monday Night Football) finished sixth at the position in average yards per dropback, eighth in success rate, and 19th in total offense.

In Baltimore, the Ravens quarterback only averaged 5.2 yards per play (passes, sacks, and runs). He finished sixth in our tables.

Philadelphia had the week’s fifth-ranked quarterback in fantasy points, but you’ll find him just below the midway point here.

In running back news, Washington’s Derrius Guice for 129 yards and two scores in only 10 carries. He got knocked out of our top five on Monday night. His teammate Adrian Peterson ran for 99 yards and a score on only 13 carries. He did not make our top 20. Meanwhile, Cincinnati’s Joe Mixon did make the top five while averaging 2.3 yards per carry.

Among the players with big receiving days this week, you’ll find Alshon Jeffery (nine catches for 137 yards and a touchdown), Tyler Higbee (7-107-1), and Courtland Sutton (4-74-2) — unless you’re looking in our tables, where those names are nowhere to be seen.

Welcome to 2019 in the NFL, where the gaps between the best and worst defenses is enormous, and as a result, opponent adjustments are having a massive impact on our ratings. There are other factors at work here, obviously — turnovers, scoring plays, consistency, etc. — but this season, who you play is almost as important as how you play. Our top quarterback for Week 13, Houston’s Deshaun Watson, only threw for 234 yards, adding 6 more as a receiver but losing 17 on sacks and runs/kneeldowns. However, he did all that against the mighty New England defense — only one other player has more passing yards against the Patriots this season. It’s a similar story for Lamar Jackson, who became just the fourth player to top 200 yards of total offense against San Francisco this year. At the other end of the spectrum we have Carson Wentz, who threw for 310 yards and three touchdowns against Miami — but against Miami, those numbers are nothing special, so Wentz finishes barely above replacement level.

Every year has good and bad defenses, of course, but this season the gap between the best (New England, -31.3% DVOA) and worst (Miami, 24.9%) is just enormous at 56.2%, which would be the second-largest since 1985 and the highest since 1991. For opponent adjustments, however, specific splits between pass and run defense are more important than overall defensive figures. And when we isolate teams by how they have fared against the pass, the 49ers, Patriots, and Dolphins jump out at you.

The 49ers have been the NFL’s best defense against the pass this season, but that doesn’t go far enough to put their excellence into perspective. They currently have a pass defense DVOA of -45.3%. Only four teams have ever finished a season with a pass defense DVOA of -40.0% or better; the last to do it was the best we have ever measured, the 2002 Tampa Bay Buccaneers at -51.9%. (The others are the 1985-86 Bears and the 1991 Eagles.) The 49ers aren’t just No. 1 against the pass this year; they have been clearly superior to most No. 1 pass defenses in the past three-plus decades.

While the 49ers have been a particularly great No. 1 team in pass defense DVOA, the Patriots have been the best second-ranked team by miles and miles. Their pass defense DVOA is -42.1%, right behind the 49ers for the best since 2002, and the fifth-best on record. Forget about having two teams at -40.0% or better — only once before have we seen two teams at -30.0% or better (in 1991, when the second-place Saints were at -33.1%). Most quarterbacks can expect to go years and years without facing defenses as fierce as the 49ers and Patriots; this year, five teams (everyone in the AFC North, plus Washington) will see them both. The dropoff from No. 2 New England to No. 3 Baltimore is bigger than the gap between Baltimore and the 21st-ranked team, the New York Jets.

And then we find the Dolphins. Their pass defense DVOA of 45.3% would be the second-worst we have ever measured, only behind (ahead of?) the 2015 New Orleans Saints. They are not alone among the list of bad defenses this season, however — you’ll note the right end of the orange line in that graph is clearly above the blue line, meaning the worst pass defenses this year are significantly worse than the worst pass defenses in an average season. Eight teams (from worst to best, the Dolphins, Bengals, Giants, Cardinals, Raiders, Falcons, Lions, and Texans) have pass defense DVOAs of 20.0% or worse, which would be the most in any given season.

If we compare the run defenses of 2019 to historical norms, we find they are by and large ahead of the curve … with one very notable exception. 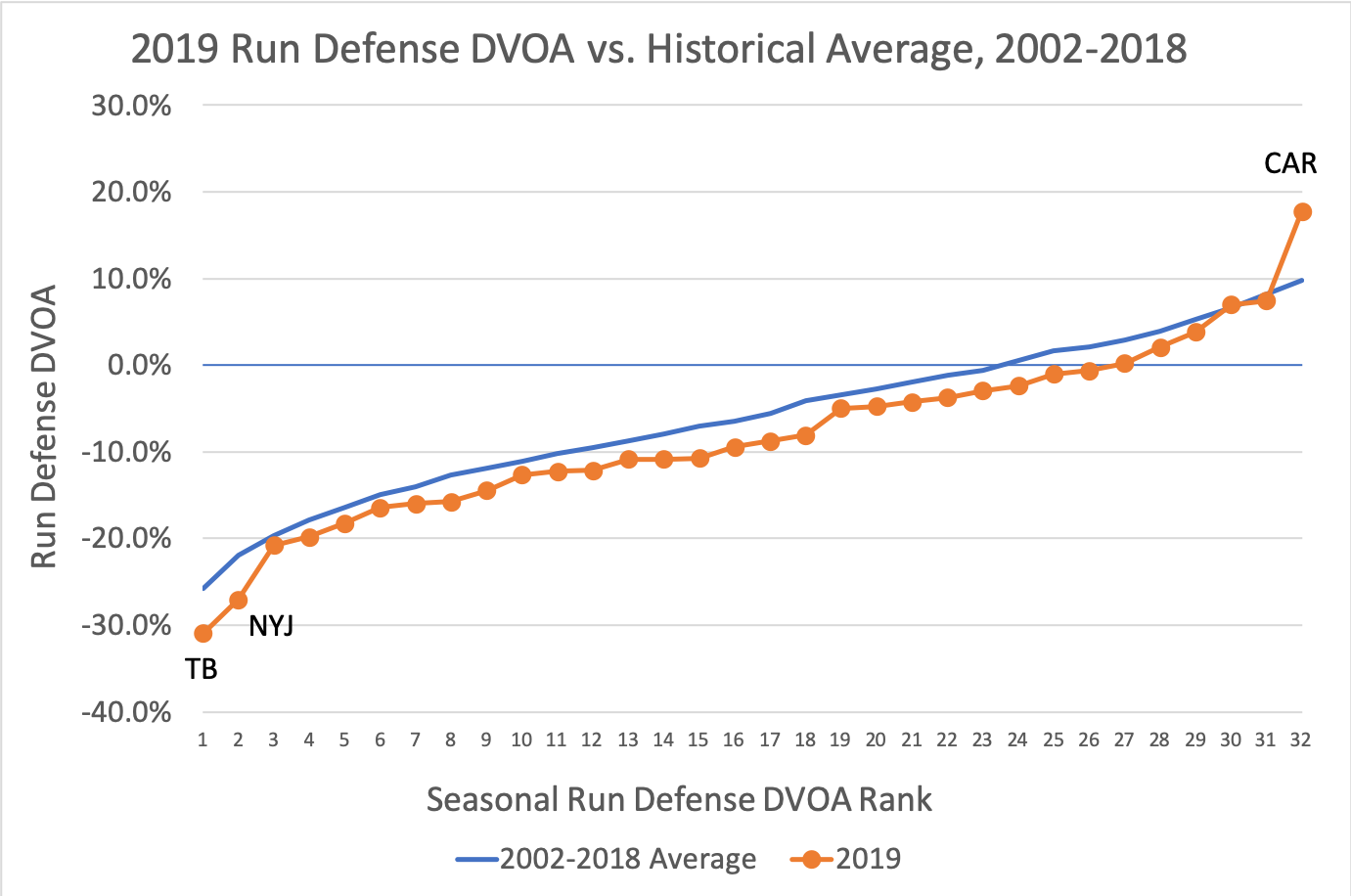 As passing in the NFL has gotten more efficient, running has become less efficient in comparison, which is why almost every team in the NFL has a better run defense DVOA than you would expect given their ranking in the league this season. There only two exceptions: No. 30 Kansas City (7.0% run defense DVOA, when we would expect the 30th-ranked team to be at 6.6%) and last-place Carolina (17.8%, much worse than the average last-place ranking of 9.7%). The Panthers are not close to the worst team we have ever measured, the 1986 Tampa Bay Buccaneers (21.2%). But they very well could finish in the bottom 10, and would be the worst since 2008 St. Louis Rams (18.0%).

And then we have this year’s Buccaneers, in what has turned out to be a very Buccaneers-intense column. The Bucs currently have a run defense DVOA of -31.0%. Only eight defenses have finished with run defense DVOAs of -30.0% or better, most recently last year’s Houston Texans (-30.1%). The all-time record held by the 2000 Baltimore Ravens (-36.6%) is probably safe, but the Bucs will likely finish somewere in the top ten. The New York Jets, meanwhile, have a run defense DVOA of -27.1%, which is very good for a second-place team, but not unprecedented: last year’s Bears were in second place at 27.3%, and the 2000 Titans were at -27.4%. You’ll note that the year 2000 has come up quite frequently, and for good reason — that was the last time we saw a gap between the best and worst run defenses as big as that between Tampa Bay and Carolina this year.

There’s still a month to go in the season, and all of the numbers for this year’s teams could end up improving or declining. But keep these adjustments in mind when asking why the numbers for Watson or Jackson may be higher than you expected — or those for Wentz or Guice may look so low.