ALAMEDA, Calif. — Oakland Raiders defensive end Clelin Ferrell hears the critics. He sees the social media posts, feels the judgments already being passed down on him at the midway point of his rookie season.

Thing is, neither he nor the Raiders care much. Not yet. And not with Ferrell contributing in ways that do not show up on a stat sheet. Like him occupying blockers to allow Arden Key to break free and sack Matthew Stafford. Or Ferrell tying up tight end Jesse James long enough at the line of scrimmage to delay his release, then getting enough pressure on Stafford to force an off-balance throw and allow safety Karl Joseph to break up a potential touchdown pass on Sunday’s final play to give the Raiders the win. 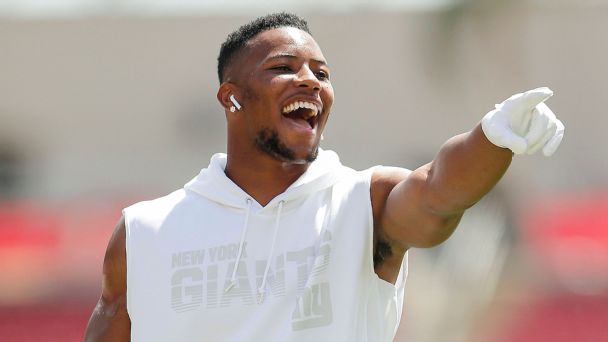 • Saquon Barkley has to win at everything
• Jason Witten returns to MNF
• Lamar Jackson delivers landmark win
• Week 9 takeaways: What ails the Bears?

Ferrell had his finest outing yet in the 31-24 defeat of the Detroit Lions in his seventh game (he missed the Chicago Bears game in London with a concussion), giving the 4-4 Raiders optimism about a playoff berth in the present and success in the future.

“I never cared about it,” Ferrell said after getting four of his 15 tackles on the season against the Lions. “I hear all the noise, good and bad, but I don’t listen to it. I heard the same thing in college, so it don’t really matter. People are going to think what they’re going to think, so I just enjoy the process. Because I love this game; I don’t enjoy the attention. I don’t love the money, I love the game. So that’s all it’s about.”

Still, it must be hard to tune out the noise, no?

After last season’s trade of Khalil Mack and the Raiders finishing with an NFL-low 13 sacks (17 fewer than the next lowest team), edge rusher was a priority for Oakland in the draft.

Nick Bosa, who is dominating for the San Francisco 49ers and went second overall, was the top-rated defensive end on the Raiders’ draft board. Ferrell was ranked second at the position by Oakland thanks to his fit in its 4-3 system, hence why the Raiders took him at No. 4 to the surprise of many.

Especially with Josh Allen available. Allen, who was more of an outside linebacker in a 3-4 scheme at Kentucky, has seven sacks, two forced fumbles and 25 tackles for the Jacksonville Jaguars, who selected him at No. 7.

Among first-round defensive linemen, only Allen has played more snaps (377 to 322) than Ferrell in two more games. Allen and Bosa have seven sacks each, while defensive tackles Dexter Lawrence, Quinnen Williams and Jerry Tillery have 2, 1.5 and 1.5 sacks, respectively.

Ferrell’s three pass breakups are as many as the other nine first-round D-linemen combined.

But ESPN’s Pass Rush Win Rate, powered by NFL Next Gen Stats, has Ferrell beating his block within 2.5 seconds just 6% of the time. That ranks 75th out of 88 pass-rushers this season with at least 100 pass rushes. The league average — 14%.

That said, Ferrell is not exclusively an edge rusher and has played out of position on the inside at times. Per ESPN Stats and Information, Ferrell has lined up as the right defensive end on 67.4% (217 of 322) of his defensive snaps thus far. That figure jumps to 77.3% (247 of 322) as an edge rusher when including his plays at left defensive end and right outside linebacker.

“Part of that is out of necessity,” Raiders coach Jon Gruden said recently. “We hope at some point to get him some more snaps at defensive end, but he’s doing pretty good. He’s a good run defender and hopefully we can get him some more at-bats rushing the passer. I know a lot of the statisticians are just looking for stats, but he’s done a lot more than just have one sack.”

At 6-foot-4, 265 pounds, Ferrell is going up against much beefier offensive linemen when playing the interior. And as he said, the game moves much faster on the inside, where he has more responsibilities when it comes to balancing the rush with filling and staying out of certain gaps, as opposed to “freelancing” on the edge.

“He’s a smart guy and if you look at his film in Clemson he played on the edge, he played inside, he played over the center sometimes,” Raiders defensive coordinator Paul Guenther said. “So he was a versatile guy, which is why we liked him, so he can handle those things. He’s very smart and he studies good, and he’s been prepared to do most of those things for us.”

Plus, Ferrell said his biggest challenge is “not knowing what I don’t know” when it comes to NFL formations and schemes. That’s why he takes pride in being the Raiders’ Swiss Army Knife on the defensive line.

As a team, the Raiders have surpassed last year’s sack total with 15 though eight games. And while Ferrell has just the one and fellow rookie edge rusher, fourth-rounder Maxx Crosby, has two sacks and seems more disruptive, Ferrell is contributing.

Even if it is hard to see from your couch.