RENTON, Wash. — For a team that often bucks convention in the NFL draft, the Seattle Seahawks were relatively straightforward this year. They attacked their most obvious needs early and often (aside from quarterback, where the options underwhelmed them). They made only one trade (but tried to make more), their fewest since 2015. They didn’t take any of their nine picks earlier than where analysts generally projected them to go.

But it wouldn’t have been a Seahawks draft without at least one debatable decision. And when they chose Michigan State running back Ken Walker III in the second round, the debate raged. Some fans liked it. Others reacted with a level of objection usually reserved for former offensive line coach Tom Cable and ill-fated Pete Carroll challenges.

Critics of the pick saw a running back at No. 41 overall as a misuse of high-end resources for a rebuilding team, but the Seahawks had no qualms about addressing a position of need that early with a player they rated highly. And with Chris Carson‘s future looking iffy following neck surgery — not to mention Rashaad Penny‘s long injury history — it was a big need.

“We picked him because, on the board, he was up there for us at a spot that we just couldn’t pass him up,” Carroll said of Walker, who was the second running back taken behind Iowa State’s Breece Hall by the New York Jets at No. 36. “But we don’t have updates yet on Chris and we won’t know for some time. … So there’s a little bit of uncertainty that we’re waiting on. With the commitment that we have to the run game, we want that group of guys really [ready] to get this thing hit off from the get-go.” 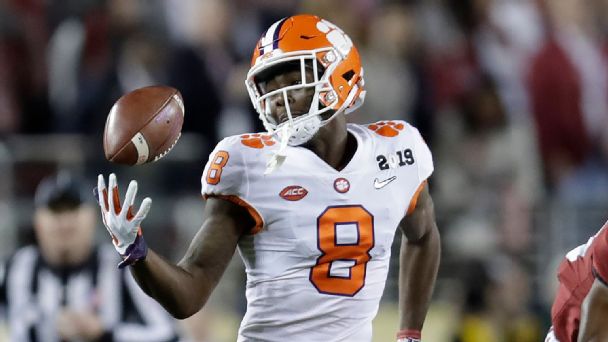 • Ross seeks ‘normal me’ after spinal surgery
• How ‘Sauce’, other rooks can impact Jets
• What Walker pick means for Seattle RBs
• What can Dallas expect from draft class?
• Why Ravens think Hamilton’s a steal

ESPN’s Todd McShay rated Walker as his top running back in the draft. Walker transferred out of a crowded Wake Forest backfield in January 2021, exploded for more than 1,600 rushing yards in 12 games during his lone season with the Spartans and finished sixth in the Heisman Trophy voting. Five of his 19 touchdowns last year came in an October win over Michigan, whose defense had three of the top 45 picks. And for a powerful downhill runner, the 5-foot-9 and 211-pound Walker has plenty of speed, running a 4.38 40-yard dash at the scouting combine.

“He’s a rocket,” Carroll said Friday after the first practice of Seattle’s rookie minicamp. “He caught the ball really well today too, which we are really excited about.”

Walker caught only 19 passes during three college seasons and, in Carroll’s words, has a ways to go in pass protection. But learning the playbook may not be as much of a challenge as it is for other rookies given his experience in the Spartans’ pro-style offense.

“Our offense and the terminology, and the concepts that we have run, he’s run before, and he was well prepared at Michigan State coming to us,” Carroll said. “He understood even the terminology to some extent too, so it’s really going to facilitate him being comfortable with the transition. So we’ll expect no issues there at all. He’ll be able to go. He was very bursty, very quick.”

Objection to the Walker pick might be scar tissue from the two other times the Seahawks’ current regime drafted a running back within the first two rounds. Christine Michael (62nd overall in 2013) hardly played for Seattle in large part due to maturity issues. Penny (27th overall in 2018) was the NFL’s most productive runner over the final five weeks of 2021, prompting Seattle to bring him back on a one-year deal, but his career has otherwise been a disappointment, with 30 of a possible 69 career games (including playoffs) missed due to injury.

Which was another reason the Seahawks felt they had to reinforce their backfield. They’ve been one of the NFL’s most run-heavy offenses of the past decade — ranking fourth in designed run percentage since 2012 — and will likely lean on their ground game without quarterback Russell Wilson in 2022. They need healthy backs to do it.

As of now, their backfield has Carson, Penny and Walker at the top. DeeJay Dallas and Travis Homer are next, but the Seahawks have preferred them in change-of-pace roles. Josh Johnson and Darwin Thompson round out the depth chart. Carson is scheduled to make a non-guaranteed $4.5 million base salary this season in the final year of his contract. Penny and Homer are also set to be free agents next offseason.

“It’s a volatile spot,” Carroll said during the draft. “Guys get banged up, and with the way we ask our guys to run, we need rotations. We like playing multiple guys and we don’t have any problem with that at all. I’ve said it to you a million times, I’m fine about going with who’s hot, but also, we have to find a way to keep our guys healthy. So that’s why the rotation is so important, so we don’t overwork them, particularly early in the year, so we can keep the good momentum building.”

General manager John Schneider interjected with a reminder of what happened late in the 2019 season. The Seahawks were poised to claim the NFC’s No. 1 seed until their backfield was suddenly decimated by injuries to Penny, Carson and C.J. Prosise. They brought Marshawn Lynch out of retirement, lost in Week 17 to enter the playoffs as a wild-card team and got bounced in the divisional round.

“We felt like that was the strongest part of our team,” Schneider said, “and we went from [three running backs] to zero.”

Carson, the Seahawks’ leading rusher from 2018-2020, had surgery late last year on the neck injury that ended his 2021 season after four games. Carroll initially expressed optimism Carson would return this season. That has given way to uncertainty — perhaps even doubt — inside Seahawks headquarters as to whether he’ll be part of Seattle’s backfield in 2022.

Tags: but they walker