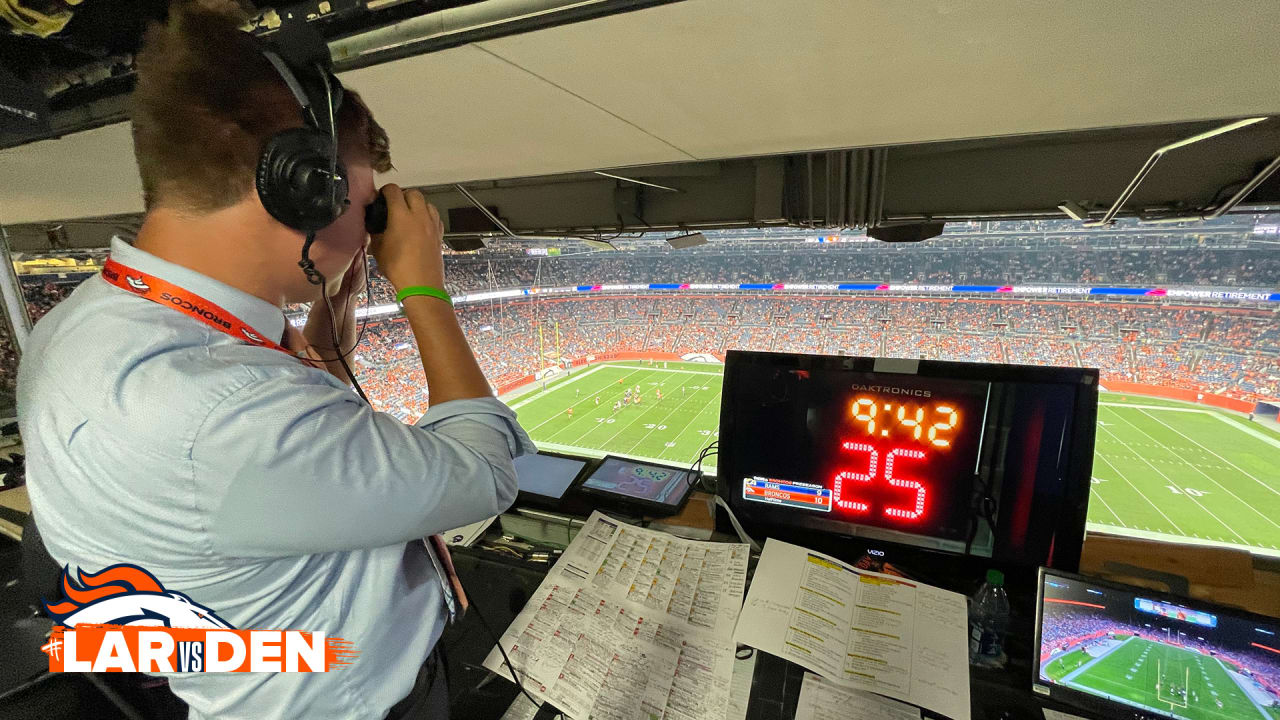 When Denver was on offense, the bottom part of the board featured the Broncos’ offense. The tight ends were on the left side of the board, offensive line near the top, receivers on the right and quarterbacks, fullbacks and run-in backs in the middle. The Broncos’ kicker and punter were tucked in the bottom left corner, near a list of Denver’s offensive coaches.

Above the Broncos’ offense, the Rams defenders were sorted into columns by position. The defensive linemen were on the left, linebackers in the middle and defensive backs to the right. In a regular-season game, the players would be sorted into a defensive formation, similar to how the offensive lineup looked. During the preseason, though, there are too many names for that format.

In theory, the assignment wasn’t too tricky. Before Denver broke the huddle, I used binoculars to identify the running back (and fullback, if necessary) and pointed to those players on the board. I wouldn’t move my finger until Steve acknowledged he’d seen the player I had indicated.

Once the play began, I’d follow the action. If the Broncos handed the ball off, I pulled the binoculars back up to my face to follow the ball carrier and identify the Rams tackler. Again, I’d point to the tackler on the Rams portion of the board. As Broncos fans cheered for a Gordon first-down run, I stayed silent; Steve’s voice went out over the airwaves just beside me.

Passing plays were more difficult. When Bridgewater dropped back to pass, binoculars were somewhat useless. If I focused on the quarterback, I’d lose sight of the rest of the play. By the time I would find the receiver and identify the number, it was too late. Steve needed the information faster. Instead, it was necessary to watch the whole play unfold and then use binoculars to confirm the receiver’s jersey number.

I quickly realized that much like good quarterback play, a good spotter has to be ready before the snap. After the first few plays, it became clear I wouldn’t be able to use my binoculars to identify the receiver after the catch and then move to the board to indicate the proper player for Steve. I learned instead to scan the formation prior to the snap.

By knowing where they were lined up, I was able to get a head start. When Bridgewater moved to his left on the touchdown throw, I already knew Sutton was over there to run his route. I didn’t need the binoculars to know No. 14 had caught the ball, and I was able to point to his name on the board with plenty of time for Steve to make the call.

The same was true when LA had the ball and I’d flip the board over to reveal the Broncos defense and Rams offense. In the final moments of the game, I knew where Saivion Smith, Jamar Johnson, P.J. Locke and Mac McCain III were on the field. I knew which Rams receivers were split to the left and which were back to the right.

I got the hang of it. When TuTu Atwell caught a pass, I pointed immediately to the board. When Malik Reed dragged him down, I pointed up to his position on the list of Broncos defenders. On that final drive, I was able to track the Broncos’ defenders well enough to point to Johnson’s name within a beat of him batting down an end-zone pass.

Any piece of information that could cut down on my reaction time was incredibly valuable, as there was no time to hesitate. Take too long to identify the tackler with binoculars? Can’t find the Rams defender on a crowded board?

The information was no longer valuable. Steve had moved on in the broadcast.

Of course, it was better to be slow than to be wrong. And like a player who remembers a drop more than a touchdown, I’ll remember the call I missed.

On the Rams’ first drive of the second quarter, Josey Jewell looped inside to sack quarterback Bryce Perkins on third-and-7 and was met at the quarterback by a host of Broncos. I first identified Jewell and pointed at the board, which allowed Steve to make the call. I glanced back down at the field through my binoculars and was sure I saw No. 95 on the ground by Perkins. McTelvin Agim had already been in the game, and it would’ve made sense for him to wind up involved in the sack. I pointed to Agim’s name on the board, and Steve alerted the audience that he’d been involved with the play. When I saw No. 45 get to Perkins on the replay a moment later, I cringed. Alexander Johnson is a decent-sized linebacker, but he’s certainly no Agim.

Steve wasn’t upset — he just looked over at me with a knowing smile. I couldn’t have felt worse. It didn’t matter that I was the one who was wrong, because Steve looked wrong. If you noticed that on the broadcast, cut Steve some slack. I deserve the blame there.

I can understand why players don’t get over a drop or missed tackle very easily; for the rest of the half I couldn’t shake the play. Luckily, I didn’t botch another play the rest of the game, and it came full circle when Agim recorded a sack of his own on the final drive.

At that point in the game, my trial run as an NFL spotter was almost over. Seven plays later, on the final snap of the game, I tracked the ball down the sideline as Perkins launched a deep throw to tight end Jacob Harris.

As the ball fell incomplete, I pointed on the board to Harris and then to the Broncos’ defender in coverage. Steve waved me off. On the final snap of the game, the win was more important than the player in coverage.

Zeroes on the scoreboard. Zeroes in the loss column for the Broncos. Denver will finish the preseason a perfect 3-0.

My performance was far less perfect, but I did gain an appreciation for the hard work, dedication and skill required from both the announcing crew and the crew around them, from the statisticians and producers to camera operators and lighting crew.

And yes, even the fill-in spotter.

Unlike some of the numbers on Saturday, that was quite easy to see.

Tags: broncos was were